Posted in: Disc Reviews by Brent Lorentson on June 12th, 2014 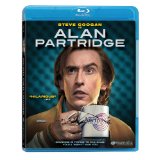 There have been more than a few films that have revolved around radio DJ’s. Good Morning Vietnam, Talk Radio, and Private Parts: these are just a few films that explore the world of the character behind the microphone, who speaks through our radios through the day-to-day grind.  Now, following in the success of the Oscar nominated film Philomena, Steve Coogan steps into the radio DJ world as Alan Partridge. Most of us are used to listening to our local DJ’s who come on between songs and blast us with their obnoxious personalities, silly games and pop culture news of the day on our morning drive to work.  But as the radio market seems to be phased out as listeners have options like Serius XM and personal listening devices loaded with music, the need for DJ’s is simply becoming a thing of the past.  And that is where Alan Partridge starts off.

The local radio station is being bought out, and the radio talent is being phased out for newer and more polished voices to bring in the younger listeners.  With his job on the line, Alan Partridge (Coogan) makes a feeble attempt to save his job by throwing another DJ, Pat Farrell (Colm Meaney) under the bus.

It’s at a celebration party at the station where things get out of hand, and Farrell returns to hold the members of the station hostage.  A “serious” hostage situation, Farrell insists to the authorities that he will only talk to one man, and that man just happens to be Alan Partridge.  Coogan’s approach to the buffoon-like character reminded me a lot of the Leslie Neilsen characters he would play through the 80’s and early 90’s.  And it’s Coogan’s performance that simply makes this movie as much fun as it is when this very easily could have been a disaster.

Also playing in the film’s favor is the presence of Colm Meaney. For most viewers I can imagine them pointing at the screen saying, “Hey, it’s that guy from (insert movie)”.  He’s been in roles that range from Star Trek: The Next Generation, to a gangster in Layer Cake.  His low-key performance as Pat is sympathetic, and as the hostage crisis intensifies, well, he simply becomes a more likeable character.  Yet in the case of Partridge, he’s simply out to exploit the hostage situation to hopefully better his career.

Some of the best moments in this film would simply be a disservice to the film, and it would just be in poor taste to spoil some of the really funny bits here.  But just about every interaction Partridge has with the police seemed to squeeze at least a giggle out of me…down to the scene of the officers using a robot to investigate a Tupperware container, just little bits in the film that actually got me to laugh.

Though the film has an R rating, it’s not a film that is dependent upon being crude and pushing the limits of taste to squeeze laughs from the audience.  Sure, there is a brief bit of nudity, but the scene builds to an amusing payoff rather than simply being gratuitous.  With clever dialog paired with dry humor that you come to expect from British films, Alan Partridge is a rare treat that I didn’t expect, and it’s a film I can see myself coming back to and watching with friends.

Alan Partridge is presented in a 2.39:1 aspect ratio.  The 1080p image is arrived at with an AVC MPEG-4 codec at 20mbps.  The overall film seemed to have a soft look to it; the colors never really seemed to pop, but I wouldn’t quite say it was saturated either.  There were only a few moments where the blacks seemed to be a bit crushed but nothing at all to distracting.  The flesh tones did seem a bit lighter during scenes that appeared to be a bit over-lit, these scenes mostly being in the studio mostly.  Considering this is a comedy and it’s not as though the film was trying to win any awards in cinematography, it’s a decent transfer, but it never seems to showcase its HD capabilities.

The DTS Master Audio 5.1 mix is a well-balanced track here.  Considering at times I have a hard time understanding British accents, that wasn’t a problem at all here considering all the dialog was crisp and clear.  As the music kicks on it is mixed well to set the tone of the scene, whether it’s used to emphasize a scene like when Willie Nelson is played or simply the music being played at the party, it’s well picked and well placed but never gets in the way of the dialog.  There is plenty of bass when the music does kick in but never enough to be distracting.

The Making of Alan Partridge: (12:05) A brief series of interviews with the cast and crew about getting the film made.  Nothing to engaging, but worth a look if you enjoyed the film.

Behind the Scenes: (1:42) A montage of footage pieced together of the crew hard at work making the film.

AXS: A Look at Alan Partridge: (2:56) Basically your standard promotional trailer mixed with some commentary describing the film.

I wasn’t really sure what to expect when I first picked up this title, but this turned out to be a fun little movie.  I wouldn’t exactly say this is up there with the Monty Python films, but this is one of the funnier titles to come out of the UK in some time.

Brent Lorentson is a horror writer and film critic based out of Tampa, Florida. With a BA in Digital Film, he co-wrote and co-directed Scavenger Hunt. His short stories have appeared in various horror anthologies. In 2019 his short script Fertile Blood will be a part of the anthology horror film Slumber Party. He is currently working on his first novel A Dark and Secret Place set to be released in late 2019. Favorite Films: Taxi Driver, Fight Club, I Saw the Devil, The Wild Bunch, Dawn of the Dead, A Clockwork Orange, Pulp Fiction, Heathers, The Monster Squad, and High Fidelity.
Capital (Blu-ray) True Detective (Blu-ray)