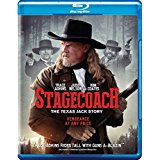 That sort of threat — especially when it’s made within the trigger-happy Western genre — usually refers to a wronged hero looking to rain vengeance upon some dastardly villain who wronged him in an extremely personal way. The only most interesting thing about Stagecoach: The Texas Jack Story is that our presumed hero is the one being hunted…and the “bad guy” has a legitimate gripe.

Trace Adkins stars as Nathaniel Reed, a former stagecoach robber who has settled into a quiet ranch life with schoolteacher wife Laura Lee (Michelle Harrison). The movie opens with a flashback to a previous stagecoach robbery in which Nathaniel shot one of his victim’s eyes out. Unfortunately for him, that maimed victim is Woody Calhoun (Kim Coates), a U.S. Marshal who becomes hell bent on bloody revenge years later. That includes disrupting Nathaniel’s idyllic new home life with tragic consequences.

The lead character here is actually based on real-life outlaw Nathaniel “Texas Jack” Reed, a late 19th century outlaw who died in 1950. Coincidentally, there’s also a different 19th century gunfighter known as “Texas Jack Vermillion”, who eventually earned the nickname “Shoot-Your-Eye-Out Vermillion.” (Sorry, Marshal Calhoun.) Despite having real-life history as a template, this low-budget Western does little to stand out from the many, many entries in this genre.

Director Terry Miles (Lonesome Dove Church, Dawn Rider) is personally responsible for a couple of those entries, and this movie does show signs of life during the scattered bits of gunplay. (Particularly the tense early shootout in Nathaniel’s ranch.) But given this project’s obvious budgetary limitations, those moments are too infrequent to prop up the film’s stilted script and performances, even though Texas Jack only clocks in at a slim 91 minutes.

Country singer-turned-actor Trace Adkins — tall, imposing, and with a well-deep, sing-songy voice — continues to absolutely look the part of a Western heavy. (I said as much in my review of the similarly underwhelming Traded.) Too bad he is mostly a lifeless presence here: Nathaniel doesn’t look particularly happy in his home life due to financial difficulties, and he doesn’t really come alive either when he adopts his “Texas Jack” persona. In other words, he’s a consistent bummer.

Coates (Sons of Anarchy) and his unsettlingly icy eyes should make for a chilling antagonist, but Marshal Calhoun is an inherently sympathetic figure, which results in an oddly incongruous performance. (Helena Marie co-stars as Calhoun’s deputy Bonnie Mudd, and she’s the scariest thing in this movie.) Meanwhile, Nelson is clearly having a blast as Sid and provides the movie’s comic relief, but he’s not quite credible as an outlaw. (Or as someone who should be appearing in a Western, period.)

Stagecoach: The Texas Jack Story is presented in an aspect ratio of 2.40:1. The 1080p image is arrived at with an AVC MPEG-4 codec at an average of 33 mbps. Instead of the sun-baked or even dusty visual presentation you’d normally associate with the Old West, this film offers a rather drab, desaturated palette. I suppose it could’ve been a stylistic choice by the filmmaker, but it makes for a bloodless, subdued experience that robs the story of some vibrancy. Fine detail is good, and this is certainly a blemish-free presentation. I just wish it wasn’t so obvious from the look of the film that it was shot nowhere near Texas. (Texas Jack was filmed in various parts of British Columbia, for the record.)

The DTS-HD Master Audio 5.1 track is a lot quieter in the rear channels than you’d expect from a movie that is largely set outdoors and features plenty of horseplay. As a result, this is a front speaker-centric presentation where dialogue is king, which isn’t great news considering the stilted script. Sam Levin’s twangy score does swell impressively throughout all speakers. I wish the movie’s gunfights had been given the same space on the soundtrack; while they feature a nice pop, those sequences (especially the early shootout in Nathaniel’s home) don’t feel as immediate, immersive, or exciting as they should.

Behind the Scenes: (17:52) This is a pretty standard featurette in which cast members — Adkins, Coates, Judd and others — describe their characters and talk about what drew them to the project. While it was interesting to learn that Bonnie (Marshal Calhoun’s loose cannon sidekick) was a man in the original script, this special feature is most notable for the sketchy audio that makes it hard to make out what Adkins is saying. Presented in HD.

The movie introduces some swerves in its second half, but they are telegraphed to the point that they almost entirely lose any shock value they might have had. Sadly, the biggest surprise here is that someone had the guts to make a Western with the word “Stagecoach” in the title. John Ford and John Wayne can rest easy: Texas Jack is in absolutely no danger of displacing their 1939 classic in the hearts and minds of fans of this genre.