Posted in: Disc Reviews by Brent Lorentson on January 9th, 2017 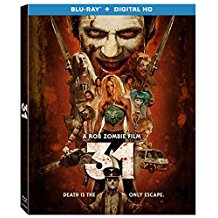 There is something about a Rob Zombie film that will always be a draw, and it is always the realism that he brings to the screen.  Whether it’s The Devil’s Rejects or his version of Halloween, he always presents it in a way that I feel is grounded in reality.  Perhaps it’s also because I live in Florida, and there are some small towns that you don’t want to break down in at night for fear of crossing some crazed backwoods types.  To put it out there, I was a fan of Rob Zombie before he was putting out movies, and I have all of his albums; he’s just a guy who does stuff that I really dig.  That being said, I can be objective in saying his films have been a bit all over the place, but Lords of Salem was a piece of work that I simply loved, and I felt it showed a lot of growth from his previous films and worked well as a slow burn.  Now he’s released 31 upon the masses, a Kickstarter film that was initially (if not mostly) financed by fans.  Is it worth the investment? Well, it depends on what you were hoping for.

The film opens in a static shot with Doom-Head (Richard Brake) approaching the camera and unloading a menacing monologue.  This is the kind of opening that should get any horror fan excited and anxious for the kind of violence that is about to be unleashed in the film, yet sadly the film never quite lives up to this scene. This doesn’t mean the film is bad; I just mean that the opening is just THAT good, and it just leaves you with anticipation to see so much more with this character.

As the film gets rolling, we meet up with a group of carnival workers who are on the road.  Meeting the group of workers definitely felt like the early van sequence in Texas Chainsaw Massacre as we’re getting to know the group.  Unfortunately this scene just didn’t work for me. The dialog just felt too over-the-top. Thankfully this doesn’t last too long as the group is quickly snatched up while making a pit stop.

It’s the day before Halloween, and Father Murder (Malcolm McDowell) along with two other women hold a yearly game they’ve called 31.  The point of the game is simple: survive the game for twelve hours and the captured group will be granted freedom.  Trouble is, the next twelve hours they’ll have a diverse group of psychotic clowns ready to kill them.  The film is pretty straightforward and makes no attempt to reach for any depth. There’s nothing wrong with that, but as a fan I was hoping for more.

What works for the film is Charly (Sheri Moon Zombie). We see her go through an array of emotions as her survival skills kick into action, and we get to see her kick some ass.  Zombie has come a long way since we saw her in House of a 1000 Corpses. What works even more are the assortment of clowns that are hunting down the group of carnival workers. There’s a Hitler-obsessed midget, Sick-Head (Pancho Moler); Psycho-Head (Lew Temple) and Schizo-Head (David Ury) a pair of chainsaw wielding maniacs; then Death-Head (Torsten Voges) and Sex-Head (E.G. Daily).  Each of these “clowns” are evil in their own special twisted way, and any of them could hold a film of their own. I wanted so much more from these grease-painted lunatics.

The trouble with the film is that our group that we’re supposed to be rooting for just isn’t a group I’m really rooting for.  It’s not that they are bad people, but there just isn’t much heart in these characters, and the one I liked the most also happens to be one of the first characters to die.

While this has all the trademarks of a Rob Zombie film, I sort of see this as his take on the Saw, Purge, and Hunger Games franchises; I still feel this is a step back for him.  The film isn’t bad, but it just doesn’t have the punch I’ve come to expect when I walk out of a Rob Zombie film. Personally, I think it’s the film’s ending that somewhat frustrated me.  I’m not going to say anything more, but it’s something that was underwhelming.  If someone were to ask where I rank this alongside his other films, well, I can happily say it’s better than Halloween 2 at least.

31 is presented in the aspect ratio 2.40:1.  The 1080p image is arrived at with an AVC MPEG-4 codec at an average of 20 mbps.  A good portion of the film takes place at night or in areas with very low light.  There are some minor compression issues that were spotted in the darker scenes, but it wasn’t anything that was distracting.  There are other elements in the film where we see things either slightly saturated, to black and white and more sepia tones.  In the scenes with more light we get some nice detail. The opening sequence in B&W is some of the most striking imagery in the film for content and detail.

The DTS-HD Master Audio 5.1 track is pretty impressive, and I’d wager it’s due to Zombie’s musical experience.  Between the ambient sound used as the characters shuffle and run through the halls, to the explosive use of sound during the attacks of violence, we get a mix of high and low range that makes an impact.  The music laid over is well placed and never drowns out the dialog, which is clean throughout.

Commentary with Rob Zombie:  Zombie does a great job with informing his audience about the ins and outs of making the film and offers plenty of information about what went into getting the film made.  There are a few moments where he gets quiet, but considering he’s on his own on this track it’s not so bad.

In Hell Everyone Loves Popcorn: (2 hrs 11min) A very in-depth look at the making of the film.  Here we get to see the ups and downs of the production and how they got the film made.  For any up and coming filmmakers who want a glimpse of what life is like on a film set, this is one of the BTS features that shows you how it is.

I was rooting for this film, and while I still like it, I’m not in love with it.  I can understand people being a bit divided on the film, among his fans I’m sure many will embrace this, while his haters will continue to hate.  I still think the film is fun and worth a shot if you are looking for a more violent horror film to enjoy this weekend.

Brent Lorentson is a horror writer and film critic based out of Tampa, Florida. With a BA in Digital Film, he co-wrote and co-directed Scavenger Hunt. His short stories have appeared in various horror anthologies. In 2019 his short script Fertile Blood will be a part of the anthology horror film Slumber Party. He is currently working on his first novel A Dark and Secret Place set to be released in late 2019. Favorite Films: Taxi Driver, Fight Club, I Saw the Devil, The Wild Bunch, Dawn of the Dead, A Clockwork Orange, Pulp Fiction, Heathers, The Monster Squad, and High Fidelity.
The Ultimate Legacy Tuesday Round Up: January 10, 2017