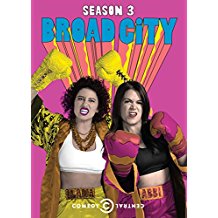 Stop me if you’ve heard this one before: single gals looking for love — among other things — in the big city. On television, the trope dates back to the days of Laverne & Shirley and continues with more contemporary entries like Sex and the City and Girls. It’s an effective, timeless story hook that has gotten a funny, druggy, tremendously weird spin thanks to the queens kweens of Comedy Central’s Broad City.

The stars of the show here are Abbi and Ilana (co-creators Abbi Jacobson and Ilana Glazer), a pair of uncommonly attached besties living and playing in NYC. (Except for Ep. 6/“Philadelphia”, which finds the pair visiting Abbi’s suburban childhood home in Wayne, Pennsylvania.) Season 3 kicks off with a bit of literal toilet humor, as we get an amusing split-screen montage of Abbi and Ilana in their respective bathrooms.

While the series still engages in bizarre flights of fancy — my favorite bit involved Abbi’s alternately nightmarish and euphoric trips to the DMV in Ep. 5/“2016” — you don’t have to squint too hard to find a strong emotional through line this season. Since the start of the show, Ilana has been in an open relationship with good guy dentist Lincoln (scene-stealer Hannibal Buress). Season 3 introduces a key, gradual change in that relationship which quietly but effectively rocks Ilana, who also loses the job she barely bothered to attend. It all serves as a fantastic showcase for Glazer, who nails some truly dramatic moments in Ep. 8/“Burning Bridges.” That episode is the culmination of Ilana feeling like she’s drifting apart from the people closest to her, which could be a consequence of her aggressively carefree and irresponsible lifestyle.

Then again, that very episode also culminates with a recreation of the climactic dinner scene from Mrs. Doubtfire. (Including a guest stint from Doubtfire co-star Mara Wilson.) The homage is a perfect bit of silliness from ‘90s kids Jacobson and Glazer, who also re-create a Sister Act 2: Back in the Habit musical sequence in Ep. 3/ “Game Over.” (Whoopi Goldberg pops up for a cameo.) In fact, this season of Broad City is more reliant on eclectic, big-name guest stars than we’ve seen before.

Broad City began life as a web series and counts Amy Poehler as an executive producer. Sadly, I felt this set absolutely peaked with that outstanding and emotional eighth episode. The problem is season 3 actually has 10 episodes, and this batch concludes with a tedious two-part installment that has Abbi and Ilana perpetually en route to Israel.

The show continues to score major points thanks to its specificity and authenticity. (Unlike the stars of a certain CBS sitcom, Abbi and Ilana actually feel like “2 Broke Girls.”) Season 3 pokes fun at pop-up stores, Tinder, Airbnb and more. Even more amusingly, Abbi (tentative yet randomly/insanely competitive) and Ilana (outrageous…prone to bursts of slang and handstands) are forced to impersonate each other in Ep. 2/ “Co-Op.”

Broad City: Season 3 features all 10 uncensored episodes on two discs. (The f-bombs here are most definitely not bleeped.) Disc 1 also features some deleted scenes and a collection of “Hack into Broad City” webisodes, while Disc 2 includes some extended scenes, the boxing-themed “Behind the Scenes of Broad City featurette (with “Jock Jams” star Michael Buffer), and “NOMO FOMO: An Art Show About Broads in the City”, which examines a Broad City-inspired exhibit.

The show has been renewed for a fourth AND fifth season. (Season 4 isn’t expected to debut until August…ugh.) Season 3 may have ended with a bit of a whimper, but the show displayed a willingness to Broad-en its emotional scope with this batch of episodes. That being said I’m most excited to see what random (mis)adventures Abbi and Ilana find themselves in once the series returns.