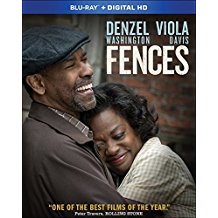 In its transition from stage to screen, Fences — the Pulitzer Prize-winning play by the late August Wilson — doesn’t venture far beyond the Maxson household. And that’s precisely the point: director/star Denzel Washington isn’t overly concerned with masking the story’s stage origins. The existential claustrophobia that the characters in the play have been carrying their entire lives is right up there on the cramped screen.Fences is set in 1950s Pittsburgh and centers around Troy Maxson (Washington), a boisterous former Negro League baseball player who works as a garbage collector alongside best friend Jim Bono (Stephen Henderson). Troy shares a home with Rose (Viola Davis) — his wife of 18 years — and their son Cory (Jovan Adepo), who is being recruited to play college football. The other people in Troy’s orbit include Lyons (Russell Hornsby) — Troy’s musician son from a previous relationship who has a penchant for visiting on his father’s payday — and Gabriel (Mykelti Williamson), Troy’s mentally disabled younger brother who also lives in the neighborhood. Gabriel was previously under Troy’s care after suffering a head injury in World War II; Troy used the subsequent government payout to buy his family’s house.

The plot — and I use the word loosely — focuses on Troy’s long simmering dissatisfaction with his past (Major League Baseball’s color barrier wasn’t broken until after Troy’s best ballplaying days were behind him) and present circumstances (there’s also a color barrier for garbage collectors; Troy and Bono open the movie by fretting about not being allowed to drive the truck that carries them to their jobs). Another major source of tension is Troy’s relationship with Cory, who appears to have a chance to become a professional athlete. As a result, Troy is alternately jealous of and concerned for his youngest son.

Of course, that only scratches the surface of Wilson’s work, which is the sixth and best-known part of the playwright’s 10-part “Pittsburgh Cycle.” (Wilson completed a Fences screenplay prior to his death in 2005, and fellow playwright Tony Kushner did some uncredited work to build on it.) The movie version of Fences maintains Wilson’s combination of authentic-sounding (the N-word flies around liberally) and florid language (the line, “Death ain’t nothing but a fastball on the outside corner” leads to a vibrant mini-monologue) while examining Big Picture issues that don’t just apply to poor black people in the 1950s. Those issues include how a parent or spouse balances being a provider and a nurturer, accepting personal responsibility vs. submitting to the will of a higher power, and wrestling with death (or at least trying to bash it with a baseball bat).

While Washington is unequivocally one of the most accomplished actors working today…he’s not quite there as a director. To be fair, Fences is certainly a handsome looking production. The film was shot on location in Pittsburgh, but Washington still opted for an exceedingly stage-y presentation in both form (there’s barely a handful of different sets) and function (Washington appears hesitant to cut or trim swatches of Wilson’s dialogue, which results in some scenes that drag).

The good news is the overwhelming majority of this material is being performed by two of the most magnetic actors on the planet. Both Washington and Davis won Tonys for their performances as Troy and Rose — and Davis just won an Oscar last month — and their titanic power translates wonderfully on screen. Troy, in particular, vacillates between the chummy and volcanically angry sides of his personality in the blink of an eye. (Troy’s taste for alcohol is also a factor.) Washington’s outsize charisma keeps our eyes glued to him the entire time. Meanwhile, we spend the early part of the story hearing about how Rose is Troy’s equal…and then we *see* it when the character gets heartbreaking news. It’s tempting to think of Fences as Troy’s story until you realize Rose has experienced the same amount of hardship. (And probably more, since women didn’t exactly have it easy in the early part of the 20th century.)

Among the supporting cast — most of which also starred alongside Washington and Davis on Broadway — Henderson is sneakily excellent as Troy’s good-natured sidekick. (That good nature subtly and effectively melts away during tense moments and as the story progresses.) It’s hard to watch Williamson’s performance and not think of his breakout role in Forrest Gump, while Hornsby is fine in his relatively limited screen time. The one casting misstep is Adepo, who simply seems stiff and overmatched during the handful of big scenes between Troy and Cory. There’s no shame in being blown off the screen by Denzel Washington, but the scenes don’t pack the same wallop they could have.

Fences is presented in an aspect ratio of 2.40:1. The 1080p image is arrived at with an AVC MPEG-4 codec at an average of 27 mbps. The wide aspect ratio is an effective, subliminal way of making Wilson’s play look more cinematic. Fine detail is extraordinarily strong in both medium shots and close ups, which makes it easier to become immersed in the shabby corner of the world the Maxsons have carved out for themselves. (Or trapped themselves in.) Flesh tones are warm and the image is frequently sunny, which surprised me considering the often-bleak story. Everyone knows Fences is based on a celebrated play, and the visual presentation courtesy of this Paramount Blu-ray does an admirable job of breathing life into the material on screen.

The DTS-HD Master Audio 7.1 track is honestly a case of overkill for this dialogue-driven presentation. Yes, the Maxsons often take their discussions and disagreements outside, where the rear speakers offer extremely subtle atmospheric noises. But other than a garbage truck rolling down the street in the movie’s opening scene and Troy challenging Death again during a thunderstorm, the subs and surrounding speakers aren’t really heard from here. Dialogue largely stays front and center, and is delivered crisply in this well-balanced (if overqualified) track.

Expanding the Audience —From Stage to Screen: (8:53) This featurette examines the impact of August Wilson’s play (including its first Broadway run starring James Earl Jones and the celebrated revival) as well as the challenges of bringing the story to the big screen. To address that latter issue, the filmmakers paid extra attention to the Maxson house and backyard. We also get a look at the development of the movie’s spare score with composer Marcelo Zarvos.

The Company of Fences: (9:17) The cast of the Broadway revival — minus Chris Chalk, who played Cory on stage — were thrilled to reunite for the movie, and Washington notes their pre-established chemistry and familiarity with the material made his job as director easier.

Building Fences — Denzel Washington: (6:56) The actor/director/producer reveals he was first approached about making Fences a movie in 2010, but opted to perform the play on Broadway because he didn’t feel ready to do the material justice yet. It’s not surprising, considering he calls Wilson’s play “a masterpiece”; you can tell from this featurette he really didn’t want to screw this one up.

Playing the Part — Rose Maxson: (6:57) An ode to the quietly powerful female lead in Fences…and the woman who won a Tony and (very recently) an Oscar for portraying her.

August Wilson’s Hill District: (6:25) Filmmakers insisted in shooting on location in Wilson’s Pittsburgh neighborhood. This was my favorite featurette of the bunch, and it reveals how cast and crew drew inspiration from the surroundings Wilson vividly describes in his work. (We also get input from Constanza Romero Wilson, the late playwright’s widow.)

It’s hard to call Fences a great movie: it’s about 20-minutes too long and never really transcends its stage origins. However, I still heartily recommend giving this movie a look because August Wilson’s play *is* a masterpiece that has now been faithfully and powerfully brought to the big screen.