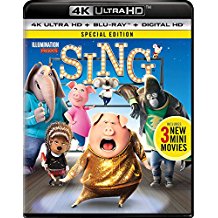 Probably the most silly of animated films this year, and that’s a good thing for Sing. Enjoyable, very funny, touching, and absolutely incredibly wacky. The family film targets children, but the adults will enjoy it a lot more than the average toon. I’m surprised the filmmakers waited so long to put the film in theaters, but with no children’s anime to stop it from becoming a blockbuster, it’s a very possible chance it will. Buster Moon (Matthew McConaughey voiced), the grandson of a theatre owner, has the tough job of bringing the venue back to its glory after he inherited the entertainment palace. Heading for oblivion, he will have to come up with entertainment that will bring in the crowds, or it’s doomsday for the young entrepreneur. With his back to the wall, he comes up with a contest for the best singer who will win $1,000, every cent he has to his name.

His assistant Karen Crawly (Garth Jennings) doesn’t have a clue about her job, but takes orders just the same.  One of her duties is to print out the flyers that will be spread all over town for the competition.  But, unbeknownst to Buster, Miss Crawly makes a typo on the flyer offering $100,000 to the winner, and a gust of wind blows them all over the city.

The candidates line up for the auditions in droves, taking the whole day to go through the contestants The Voice-style.  Directors Christophe Lourdelet and Garth Jennings (who also wrote the script) put their funny cast of animal characters to the test as they try to win the big money.  Likable, lovable, kooky, and corny, the singers take the stage one by one belting songs, crooning, and even dancing to their lyrics. The show’s a stitch, and the theater owner Buster Moon has all the pain, nervous conditions, and problems that every production manager has when their back’s to the wall.

Needless to say, the film really makes the grade for the holidays and sets its sights for a huge box office because of school break. Nicely animated, the characters take on the soft, puffy animation that the producer Janet Healy and Associate Producer Brett Hoffman have used in their films Despicable Me and Secret Lives of Pets.  Huggable and squishy, it’s the thing right now in animation for families, and especially the youngsters.

Sing has been rated PG for some rude humor and mild peril. The music is snappy with some favorites like Stevie Wonder, The Spencer Davis Group, Gypsy Kings, Queen, and Jennifer Hudson.  The cast even belts out some cool tunes as well, and I especially liked Taylor Swift’s “Shake it Off”, sung by actors Nick Kroll & Reese Witherspoon.

Sing is presented in its original aspect ratio of 1.85:1. The ultra-high-definition image is arrived at by an HEVC codec with an average bitrate of 55mbps. The rate jumps as high as 78 mbps. The ultra-high-definition image presentation is an extremely colorful affair. This disc takes full advantage of the HDR element of the UHD format. Colors are vivid and pop all over the place. There’s a fair amount of texture, but the real star beyond color is the depth of the image. Objects show a solid amount of space for a 2D release. The one flaw in the picture is the brightness of the overall image. There’s a lot of white wash that weakens the film’s black levels considerably. The sharpness is as stunning as you should expect from a 4K release of a digital film.

The Dolby Atmos presentation defaults to a 7.1 track. The audio presentation has a lot going for it. This is a musical film that relies quite heavily on the sound clarity. You get perfectly placed sounds even if the mix isn’t as aggressive as I expected. The extra speakers bring out things like horns in an arrangement or that slight touch of ear candy that makes for an immersive experience, at least as much as this stylized animated world can be. Dialog is clear. Still, it’s the musical presentations that shine here. The subs deliver as well. You’ll feel the music, to be sure.

The UHD disc provides the film and three mini-movies:

Gunter Babysits: (3:48) Gunter sits for the piglets and uses dance to get them tired enough for bed.

Eddie’s Life Coach: (4:17) Eddie takes a self-improvement course or faces getting kicked out of the pool house.

The Blu-ray contains the remainder of the extras:

The Making Of Sing: (4:40) This is too short to cover anything in too much detail. Still, it gives us a quick look at character design, animation processes and voice acting.

Character Profiles: (12:25) Pick your poison. Choose from: Buster Moon, Rosita, Meena, Johnny, Gunter, or Mrs. Crawly. Or just use the handy play-all option. You’ll get brief visits with the actors who play the voices.

Music Videos:  Both Don’t You Worry ‘Bout A Thing and Faith get videos. There’s a making of a music video piece, and Faith has a dance and a lyric option.

The Sing Network: A collection of very brief promo pieces that average less than a minute.

Be cautious when deciding to allow immature children see the film. as it does have some scenes that are inappropriate for youngsters.

John Delia has been on all sides of the movie business from publicity, writing for publications and on line blogs, script writing, to film making. Writer, critic, film editor he has worked as a film critic on this second go around for 14 years. He earned his Bachelor’s degree at the college of Journalism and Communications at the University of Florida in Gainesville, Florida. John is an active member of the Southeastern Film Critics Association (SEFCA) . Favorite Films: Lord of the Rings/Hobbit trilogies, The Godfather trilogy, the Indiana Jones trilogy (I didn't like the 4th), The Avengers and for TV it's Game of Thrones. As for animation it's a tie between anything Pixar and everything Hayao Miyazaki.
Fences (Blu-ray) Insecure: The Complete First Season (Blu-ray)