Fantastic Beasts and Where to Find Them (UHD Blu-ray) (4K) 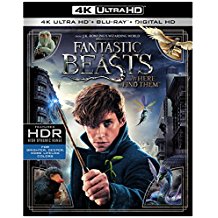 The wizarding world J.K. Rowling conjured for her Harry Potter series captured the imaginations of children (and many, many adults) throughout the globe because it was precisely that…a fully realized, living and breathing world with its own lingo and lore. So while spinning off a corner of that universe might seem like a blatant cash grab, Rowling’s imagination has provided particularly fertile ground for new franchise opportunities. (OK, OK…the part where Warner Bros. agreed to make five of these before the first one even came out *does* feel like a cash grab.) For example, this latest crowd-pleasing stab at a billion-dollar series is based on…a fictional textbook mentioned in Rowling’s Potter saga.

Meet Newt Scamander, whom Harry Potter fans know as the author of the oft-referenced (by Hermione) textbook, “Fantastic Beasts And Where To Find Them.” In this new film, Newt (Eddie Redmayne) is an awkward, introverted wizard who arrives in 1926 New York City carrying a suitcase packed with exotic, magical creatures. A prologue tells us that this period represents a time of unrest in the wizarding world — thanks, in part, to a dangerous Dark Wizard named Grindewald — and that there is a growing anti-wizard sentiment among non-magical folks. Unfortunately, the suitcase Newt is carrying also has the most unreliable latch I’ve ever seen, so some of the creatures escape and proceed to wreak havoc throughout the city.

That mishap ultimately attracts a lot of attention, which is a problem because people like Mary Lou Barebone (Samantha Morton) — head of an extremist group called the “Second Salemers” — preach about the existence of a magical world and lobby for the destruction of witches and wizards. Newt’s shenanigans also place him on the radar of the Magical Congress of the United States of America (MACUSA): disgraced MACUSA agent Tina Goldstein (Katherine Waterston) corrals Newt and brings him to high-ranking Auror Percival Graves (Colin Farrell). Meanwhile, a wannabe baker named Jacob Kowalski (Dan Fogler) also becomes ensnared in Newt’s adventure after grabbing the wrong suitcase. As Newt and Jacob scramble across the city to recover the creatures, the veil between the magical and non-magical world threatens to slip with deadly consequences.

Despite penning the seven Harry Potter novels that became the basis for eight blockbuster films, Fantastic Beasts…represents Rowling’s first stab at writing a screenplay. The writer cleverly chose a new time (the Roaring Twenties) and place (New York City) for this new adventure: Potter fans will be familiar with some of the magical terms (an “Auror” is a dark wizard catcher), but the new setting still allows for some sense of discovery (Non-magical people in America are called “No-Majs”, which doesn’t have nearly the same ring as “Muggles.”)

The director is David Yates, who is intimately familiar with the Potter saga after helming the final four movies in that previous franchise. Yates happily embraces the fresh setting by having his camera swoop around early 20th century NYC, setting a sequence inside a goblin-run speakeasy, and showcasing Oscar winner Colleen Atwood’s dazzling Jazz Age costumes. I personally found that stuff more striking than the movie’s forays into Newt’s magical suitcase. Speaking of Newt’s suitcase, the stars of the show (sorry, Eddie) are naturally the titular CGI Beasts. (Newt, being the compassionate animal lover that he is, also prefers these curious creatures to humans.) Rowling’s standout creations this time around include the Niffler (a furry beast attracted to precious metals) and the Occamy (a winged creature with a serpentine body that grows or shrinks to fill whatever space it is occupying).

Then again, the movie doesn’t take full advantage of the sequence involving an invisible Dougal (which can apparently calculate probability and requires our heroes to be unpredictable), and the movie’s biggest threat is ultimately something called an Obscurus, a dark force that is accidentally created by children who suppress their magical abilities. Barebone’s troubled adopted son Credence (Ezra Miller) is tasked with unleashing the power of the Obscurus; unfortunately, that power is presented on screen as a massive, incoherent black mass, which saps much of the energy from the movie’s climax.

This is especially the case because Fantastic Beasts…is at its best when it is focusing on its core four quirky characters. Redmayne brings a welcome tenderness and effortless sense of geeky humor to his lead performance as Newt. Fogler provides most of the movie’s comic relief, since Jacob serves as a wide-eyed audience surrogate into this magical new world. Meanwhile, Waterston is outshone by Alison Sudol, who plays Tina’s fetching flapper sister Queenie (who can read minds). At the other end of the spectrum, Farrell’s severe haircut and demeanor don’t do much to mask Graves’ dark side. (The scenes involving the Aurors will mostly make you long for a detective story/cop show centered around them.) Sadly, Farrell is never fully allowed to cut loose, which is another reason the movie’s climax falls pretty flat. Luckily, a sweet coda brings the focus back to our main heroes.

Fantastic Beasts And Where To Find Them is presented in its original aspect ratio of 2.40:1. The Ultra-high-definition  image is arrived at by an HEVC codec with an average bitrate of 70mbps. Just like the Harry Potter films, this is a visually stylistic film with its own unique color palette and hues. Add to the mystical world that this is also a period piece and you get a wonderful contrast of a desaturated world but plenty of brilliantly-colored creatures. The ultra-high-definition image presentation keeps up nicely with that changes from colorless to colorful throughout the film. Some of these creatures offer vivid colors that are faithfully reproduced in this release. The presentation is plenty sharp with an eye toward nice textures and details. The fact that much of the sets and props are practical helps make this world look and feel more believable. Black levels are quite nice, offering a pretty solid amount of shadow definition.

The Dolby Atmos presentation only defaults to a 5.1 audio presentation. I was disappointed that Warner didn’t spread their audio wings a bit more with an appropriate 7.1 affair. Still, there is plenty of audio wizardry to be found here. This is an aggressive mix that invites you into each location in an immersive way. The bustling New York streets offer plenty of life and the magical moments can be quite… well… magical. Plenty of ear candy and a rousing James Newton Howard score. Dialog works its way perfectly through the mix. The subs will offer you some room-shaking moments that also add nice depth to the sound.

Before Harry Potter – A New Era Of Magic Begins: (15:39) J.K. Rowling leads this feature that gives us the evolution from the Potter films/books to this new franchise. Cast and crew join to talk about the sets and characters of the film. There’s plenty of behind-the-scenes footage. It does often become a bit of a Rowling and Yates love-fest.

Characters: You get some short features on the characters:

Creatures: These features give you conceptual art and previz to get you closer to the magical creatures:

Design: This is a series of production design features: