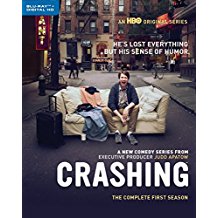 “It’s not all it’s cut out to be…it’s not about being on stage all the time. It’s about the killing of time.”

There certainly hasn’t been a shortage of sitcoms starring stand-up comedians. Many of them (Roseanne, Home Improvement, Everybody Loves Raymond) have grafted the comic’s persona onto a family-friendly format. Even the shows that have depicted the life of a comic tend to take a surreal approach (Louie) or fast-forward to the part where the star is an established comedian (Seinfeld). HBO’s Crashing stands out because it honestly (and painfully) depicts the struggle of an aspiring stand-up…and makes it look very, very funny.

Pete (Pete Holmes) lives in upstate New York and dreams of working as a stand-up comic. To that end, he regularly invests time and money by traveling into the city at night to hone his craft at various open mics, much to the chagrin of his wife Jess (Lauren Lapkus), who supports Pete financially. One day, Pete’s world comes (I apologize) crashing down when he catches Jess in a compromising position with hippy-dippy art teacher Lief (George Basil).

Following that shock to the system, Pete escapes to NYC and performs an excruciating stand-up set that almost leads him to quit comedy altogether. Fortunately for him, his performance also results in a fateful meeting with comedian Artie Lange (delivering hilarious and heartfelt work playing himself), who helps Pete sink even lower before finally taking pity on the guy and letting Pete crash on his couch.

“Comedy: take a look at your life, and then write down some thoughts, memorize them, and then pass them off as something you’re saying in the moment for people who are drinking and paid a cover.”

Crashing is created by Holmes and loosely based on his life. For example, the real-life Holmes grew up as a devout Christian while his on-screen alter ego studied to be a youth pastor, and the show gets some solid mileage out of Pete being a relative babe in the woods compared to his more jaded comic colleagues. However, the quality that comes through most clearly — other than Holmes’ strong resemblance to John Ritter (or “lesbian Val Kilmer,” as Pete puts it in Crashing) — is Pete’s passionate, earnest love for his craft and his willingness to pursue comedy no matter what. In fact, the reason Pete’s marriage to Jess fails is because he loves comedy more than he loves her…and it’s not particularly close.

While that sounds painfully cheesy and aspirational, let me assure you that Crashing does not glamorize the life of a comedian. The series counts Judd Apatow — who previously explored the not-so-humorous side of comedy with Funny People — as an executive producer. (Apatow also directed the first and last episodes of Crashing season 1.) One of the most effective recurring themes here is that there is a thin line between being a struggling comic and being homeless. Ep. 4/“Barking”, in particular, was an eye-opener for me: a lot of us have passed aggressive people on the street urging us to see some sketchy comedy show, but I never realized that those people were more than likely comics angling to earn some stage time at a club.

Not surprisingly, the show also pays extra close attention to the stand-up comedy we see on-screen. In other words, Pete’s early stand-up performances — based on Holmes’ own past material — are believably bad (he relies on wordplay, like wondering aloud if anyone in the KKK had an issue with the misspelling of the word “clan”), while still exhibiting enough potential to make people around Pete want to root for and support him. The generosity of more established comedians — including stars like Lange, Sarah Silverman and T.J. Miller — is another unexpected delight in Crashing.

The series only gets bogged down when it focuses too heavily on Pete’s failing/failed marriage, even though Lapkus delivers strong work (particularly during an awkward birthday dinner with Pete’s clingy parents) and Basil is an affable, laid-back surprise as the man who cuckolded Pete. The finale (“The Baptism”) largely eschews Pete’s comedic pursuits, which sends us off on a bit of a weak note for the season. Fortunately, there was more than enough to like in Crashing to earn Pete plenty more stage time with me.

Crashing: The Complete First Season is presented in its original aspect ratio of 1.78:1. The 1080p image is arrived at with an AVC MPEG-4 codec at an average of 33 mbps. Naturally, a series about comedians is going to spend a fair amount of time in darkened comedy clubs. This disc offers some solid fine detail for those sequences, so that we can enjoy them in all their shabby glory. And although much of the action takes place in New York City, Crashing has a surprisingly varied visual palette. The series takes us from the muted colors of Pete’s suburban upstate New York neighborhood to the bright and striking Rachael Ray studio. Meanwhile, the season finale/“The Baptism” almost entirely takes place outdoors in a picturesque and sunny field, which is a striking contrast after some of the squalor Pete endures leading up to that final episode.

The DTS-HD Master Audio 5.1 track is a wonderful surprise for what I was expecting to be a fairly straightfoward and dialogue-driven presentation. Don’t get me wrong: dialogue is still the priority here, and it emanates cleanly and clearly from the front speakers here. What I wasn’t expecting was the level of care and detail applied to the rest of this sonic presentation. Pete and his friends often perform to nearly empty comedy clubs, and the silence can be deafening…which makes the sparse laughter or uncomfortable shifting of a chair coming from a rear speaker really stand out. At the other end of the spectrum, we get an impactful explosion of sound during the Rachael Ray crowd sequences. There are also myriad low-key, lively ways that NYC traffic and other urban noises populate the entire sound field thanks to pinpoint separation.

All of the bonus material is presented in HD. The “Guest Star Fan Club” segments are available on both discs with their corresponding episodes. “Comedy Extras” are available on Disc 1, and the rest of the special features can be found on Disc 2.

Guest Star Fan Club: (9:05) These brief segments feature creator/star Pete Holmes gushing about/providing backstory for season 1’s higher profile guest stars, including Artie Lange (whom Holmes met on the day he auditioned), T.J. Miller (a longtime friend of Holmes’), Hannibal Buress (one of Holmes’ personal favorite comics), and Sarah Silverman (who is apparently as generous in real life to up-and-coming comics as she is on the show).

Comedy Extras: (5:41) An extended look at some of the stand-up comedy sequences in the show, which gives us a longer look at the likes of Miller, Buress, and Aparna Nancherla in their natural habitat on stage. Basically, this show’s version of Deleted/Extended Scenes.

Pete Holmes — Faces and Sounds: (57:02) The comic’s full HBO comedy special, which was filmed in Chicago. His upbeat, real-life comic persona is not too far off from the version we get on Crashing, except of course for the part where Holmes is infinitely more comfortable on stage in “Faces and Sounds.” This special includes harmless but funny riffs on the joys of discovering a new sleep position, careless, flute-playing cabbies, and outrage over why unicorns aren’t called “unihorns.”

About Crashing: (1:48) A quickie series overview featuring comments from Holmes, exec producer/director Judd Apatow and others.

The Art of Crashing: (2:38) Holmes and some of the other comics in the series enthusiastically talk about enduring hardships early in their careers, including sleeping in cars and on bed bug-ridden air mattresses. It all comes off as a necessary rite of passage, and Holmes says he was excited to bring that level of desperation to the small screen for the first time.

Crashing: The Complete First Season features all 8 episodes on two discs. The show premiered a few months before Showtime’s I’m Dying Up Here, a more stylish look at L.A. stand-up comedy in the 1970s.

I’m pleased to report that Crashing has been renewed for a second season. Given the infinite number of funny people with couches Pete can sleep on, I’m excited to see where his comedic aspirations take him going forward.