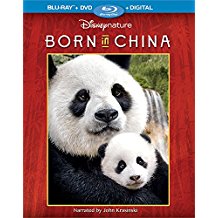 “The sheer beauty of China manifests itself in so many different ways, in so many remote corners. It sometimes feels like another world.”

To help celebrate Earth Day each year, Disneynature — the independent film unit at the Mouse House dedicated to making nature documentaries — has gotten in the habit of immersing us in a different corner of the animal kingdom. While it’s a bit surprising that it took nine movies to finally arrive in China, the wait was absolutely worth it for fans of cuddly critters and breathtaking landscapes. The country’s otherworldly beauty makes up for some off-kilter narration and less-than-thrilling (invented) storylines.

“It is a story of cranes…pandas…antelope…monkeys…and leopards. All of whom call China their home.”

After a brief (and eventually poignant) prologue focused on red-crowned cranes and the notion that they carry the spirit of departed creatures whenever they take flight, Born in China settles on its main characters. Dawa is a protective snow leopard who guard her turf almost as fiercely as she cares for her two young cubs. Tao Tao is a mischievous golden snub-nosed monkey who starts to feel neglected upon the arrival of a baby sister. Yaya is a giant panda who sits around consuming 40 lbs of bamboo each day while caring for her adorable daughter Mei Mei. We also follow a herd of female chiru — Tibetan antelopes — as they migrate to give birth.

Born in China starts in the spring and covers all four seasons; not surprisingly, the inherent drama of a harsh and chilly winter serves as the movie’s climax. Unlike recent offerings like Bears and Monkey Kingdom, the focus here is more varied and scattered, which has its pluses and minuses.

On the plus side, it would be foolish to make a movie about China’s wildlife and only focus on any single species. On the other hand, the storylines in Born in China end up being pretty hit-or-miss. The most effective drama undoubtedly involves Dawa and her quest to fend of a rival snow leopard while trying to shake off an injury to her paw that could prevent her from acquiring food for her cubs. I also enjoyed the sibling rivalry of Tao Tao, who falls in with a reckless pack of monkeys known as the Lost Boys before eventually reconnecting with his own family.

Then again, the chiru aren’t granted nearly the same personality as their co-stars, mostly likely because their segments are pretty straightforward. And then there’s Yaya and Mei Mei, the impossibly lovable panda pair. Except the thing about pandas is that they are incredibly lazy, which means they’re not very interesting to watch for more than a few minutes.

Born in China is narrated by John Krasinski, who is best known for his All-American, self-deprecating charms on the U.S. version of The Office. As a huge fan of that show (and Krasinski), I’m sorry to say that this is a pretty bad mismatch of narrator and material. Krasinki’s overly earnest line readings about the mystical qualities of China and its creatures sound completely hokey and (unintentionally) funny.

Luckily, the visual beauty of Born in China compensates for any silly narration.

Born in China is presented in an aspect ratio of 1.78:1. The 1080p image is arrived at with an AVC MPEG-4 codec at an average of 31 mbps. The most striking part of this visual presentation is probably the exquisite fine detail; it’s what allows you to pick out every one of Ya Ya the giant panda’s hairs or to spot Dawa the snow leopard as she tries to blend in with the mountainous terrain. Since the movie spans all four seasons, we get some truly resplendent whites during the chilly winter months along with some eye-popping explosions of colors in the autumn, courtesy of foliage on the ground. In short, the image here is as stunning as it is versatile.

The DTS-HD Master Audio 5.1 track is every bit the equal of the extraordinary visual presentation, but in less obvious ways. This is a full-bodied and immersive sonic experience in every way; even the flapping of wings when a crane takes flight is given subtle heft. Subs rumble to life in delightfully surprising ways, including to help convey the power of rushing water. Naturally, the rear speakers pipe up whenever the golden snub-nosed monkeys get up to their old tricks or during a whooshing, powerful snowstorm. Narrator John Krasinki’s voice is crystal clear and warm in this reference quality track.

Panda Shoots and Bamboo Suits: (6:27) A funny and informative look at the crew filming the extremely rare pandas. (We learn there are only 1,848 in the wild today.) I particularly enjoyed getting a look at the panda costumes the crew had to wear so the animals wouldn’t get accustomed to approaching humans.

Walking with Monkeys: (8:03) The monkeys, on the other hand, have no qualms approaching the crew and inspecting the equipment. The crew also had to brave some chilly conditions in Winter 2015.

Masters of Camouflage: (4:56) Snow leopard cubs had never been filmed in the wild, so the crew had its hands full here. They went 3 months without a sighting, but…if you’ve seen the film, you know how it turns out.

Wading Through Wetlands: (5:22) The crane is said to be a symbol of longevity, faithfulness, and beauty in China, and the crew set about capturing the first movements of some baby chicks’ lives.

“Everything, Everything” Music Video: (3:30) American Authors perform the track that plays over the end credit..

Disneynature — Get Inspired, Get Involved: (1:18) A well-meaning plug for the Disney Conservation Fund, which made a donation to the World Wildlife Fund as part of this project.

While the animal storylines vary in quality, I would still recommend you check this out based on the stunning imagery and strong special features. Like other Disneynature docs, Born in China is a breeze — the 79-minute running time is appealing in case you want to show this to a kiddo with a short attention span — and absolutely conveys the idea that “China is a land of myth and mystery.”