Posted in: Disc Reviews by Brent Lorentson on November 16th, 2017 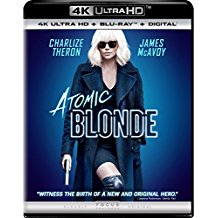 John Wick was an action film that seemed to sneak up on everyone. Sure, it had a great trailer, but I don’t think anyone expected just how great it actually was. What made it so effective weren’t just the well-choreographed fights and the stylish look of the film, but it was the characters who while over the top, were also ones the audience could relate to. Atomic Blonde is helmed by half the directing team that gave us the first John Wick, and from what the trailers first teased us with, I came into it with hopes we’d get something special.  While on the surface I can’t say that this film surpasses John Wick, what it does is stand alone for being a culturally and socially important film as it delivers not just the ultimate badass female in an action film, but I believe the first that belongs in the LBGT community.  It’s a big deal what this character represents, but how does the rest of the film fare throughout the fistfights and shootouts?

It’s the fall of 1989 in Berlin when we are introduced to Lorraine Broughton (Charlize Theron). She’s bruised and battered as she enjoys an ice bath.  The Cold War is coming to a close as the Berlin Wall is closer than ever to coming down.  She is an agent with MI:6 and is being debriefed by her superior, Eric Gray (Toby Jones), and a member of the CIA, played by John Goodman.  The debriefing is a combative one. Obviously we can tell she’s been through hell, and she begins to tell her story from the previous days as she attempted to complete her mission.

After a secret agent is killed by a Russian operative, Broughton was hired to go to Berlin and retrieve a rogue operative and a classified list of names of those involved in all the intelligence organizations that he was able to acquire.  The release of the list would obviously put agents on all sides at risk and result in prolonging the war. If you’re scratching your head wondering where you’ve heard this before, well, it’s far from an original plot; after all, we’ve seen it before in Mission Impossible.  What’s even more frustrating is that a lot of the film plays out as though this was a Cold War version of Mission Impossible. It’s not a bad thing, but there are many déjà vu moments in the film.

In most action and spy films, we’d be given the sub-plot romance between Lorraine and Percival, but it’s 2017, and instead we see Lorraine pursue Delphine.  Is she seducing her to get information, or is there something more intimate going on between the two? This is a question I’m glad the filmmakers tease us with for a bit, and it really is not for some time that this very question is answered, and before then we get plenty of onscreen sexual chemistry between the two.  Seeing our heroine engaged in a sexually-charged role, and with another female, is something we’ll be seeing a lot more of with the sociopolitical climate where it is.  Sure, you can argue that this plays out to keep the male audience happy, but what makes this relationship more impactful on and off the screen is how much value Lorraine does place on this relationship. Lorraine is never a woman who depends on a male to get her out of trouble, but instead she depends on herself.  It’s the strength given to this character that is so fresh and so unique that in my opinion it allows the character of Lorraine to surpass what she did with Furiosa in Mad Max: Fury Road or even as Aileen in Monster.

Atomic Blonde is presented in its original aspect ratio of 2.39:1. The ultra-high-definition 2160p image is arrived at by an HEVC codec with an average bitrate of 55-60 mbps. This ultra-high-definition image presentation reproduces the film’s style pretty much as it appeared on the big screen. It’s a 2K shoot which has basically been upconverted to 4K, as are many films shot on digital. Remember that 35mm or higher film is natively 4K (or higher), but most production cameras film in 2K these days. I suspect that will change. The big advantage here is that the atmospheric locations pop a little more. The film delivers intentionally muted colors with splashes of bright almost neon color as contrasting flash. The “paint” title cards are a good example. Another is a splash of red on a London phone booth against a dreary colorless landscape with extremely cold color temperatures. Black levels are only fair owing to the stylized color correction. But there’s enough dark definition to make the action work.

The DTS:X presentation defaults to a solid 7.1 track. Expect rumbling, room-shaking subs as a near constant part of the action. From the score to the surround sounds, this film is quite deep on the subs. They work constantly. The rather large and spacious sound field stands in contrast to the rather gritty and tight style of the camera work. Source music is very important here with plenty of 80’s anthems used to move the story or action along. The surrounds get aggressive and busy during the fight scenes. It’s not just bullets that will fly around your room. Splintering wood and other damage make their way distinctly through the mix. Dialog manages to punch through it all quite nicely with a well-defined though toward space and placement.

There is an Audio Commentary with Director David Leitch and Editor Elisobet Ronaldsdottie.

Welcome To Berlin: (4:23) The talk here is about the spy environment in Berlin at the last years of the Cold War and how it fits the movie.

Blondes Have More Gun: (7:01) This is pretty much a profile on Charlize Theron and her film character. The accent is on the action and stunts.

Spymaster: (4:18) This is pretty much a lovefest for Leitch.

Anatomy Of A Fight Scene: (7:53) This one runs the 7-minute one-shot fight scene with multi-screen boxes that offer behind the scenes footage synched up with the scene. Leitch appears in a box, often to add what basically amounts to a commentary track.

Story In Motion: Two scenes are broken down in very brief sequences. There’s an optional director commentary for each.

Unfortunately what hurts the film is that it simply runs too long.  The film has such a strong start, but as the film plods along in the middle it nearly comes to a screeching halt with an occasional fight scene to keeping the film rolling.  By the time the film picks up steam again, despite having a great final act, it has already lost its way.  Trim this down to a leaner 100 minutes and I think we’d be discussing a different film, perhaps even a classic, because everything is on the screen that makes this film work, but there are plenty of bits that could have been cut.  In the end, though, this is Charlize Theron’s film, and she owns the screen with this one. Hopefully we’ll get to see her reprise the role again and see what more she can inject into this character.

Brent Lorentson is a horror writer and film critic based out of Tampa, Florida. With a BA in Digital Film, he co-wrote and co-directed Scavenger Hunt. His short stories have appeared in various horror anthologies. In 2019 his short script Fertile Blood will be a part of the anthology horror film Slumber Party. He is currently working on his first novel A Dark and Secret Place set to be released in late 2019. Favorite Films: Taxi Driver, Fight Club, I Saw the Devil, The Wild Bunch, Dawn of the Dead, A Clockwork Orange, Pulp Fiction, Heathers, The Monster Squad, and High Fidelity.
Teen Wolf Season 6 Part 2 Home Alone 2: Lost in New York (25th Anniversary Edition) (Blu-ray)