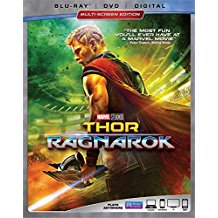 DC has finally gotten a recent comic superhero movie right with Wonder Woman. We’ll know in just a few days if they can bring the streak to two films when Justice League hits the box office this month. Marvel, on the other hand, has a streak going that dates back to 2008 and reached a truly astonishing 16 films leading up to the third Thor film, Thor: Ragnarok. With three more films on tap for next year, that run could reach 20 films very soon. Not all of these efforts have been great by any means. I found the last Thor film to be one of the franchise’s weaker moments. But all of these movies do have one thing in common. With even the least of these films, they have all been entertaining. And that’s exactly where Thor: Ragnarok fits the mold perfectly. I wouldn’t call this Marvel’s finest moment. I would call it one hell of an entertaining ride through the Marvel Universe. Fasten your safety harness. Remember to keep hands and feet inside your seat at all times. No flash photography. You are encouraged to have food and drink; however, there is a choking hazard, as some of this movie is so funny there could be fountains of popcorn and sugary syrup substances ejected toward the rider in front of you.

Thor (Hemsworth) is battling a creature that has sworn to bring about Ragnarok, which is the Asgard version of the apocalypse. Believing he has succeeded in saving his home, he returns only to find the real threat was a hidden sibling, Hela (Blanchett). She’s got a heavy dose of payback planned with the help of her newfound toady, Skurge (Urban). Heimdall (Elba) has also fallen out of favor and is not at his post when Thor and Loki (Hiddleston) attempt a return to Asgard. The pair ends up on another world where a powerful megalomaniac named Grandmaster (Goldblum) forces members of many races to fight in gladiator games against his super-champion, The Incredible Hulk (Ruffalo). Thor must try to find a way to get through to the Bruce Banner inside of the Hulk so that they can escape and save Asgard. Along the way they seek the help of a disillusioned former Valkyrie to save their people. Meanwhile Heimdall is trying to protect the people in Asgard from Hela. That’s pretty much the story in a nutshell.

What is not cheap or out of another era are the impressive visuals. Once again Marvel has moved the bar in what you can do on the screen. There are some incredibly alien environments here that literally jump at you from the screen. The Grandmaster’s world reminded me of the future Earth found in Pixar’s Wall-E. There are mounds of trash that are literally from centuries of technologies strewn about the planet’s surface. Asgard continues to be a marvel. But it’s the space and ship scenes that are truly groundbreaking. The edge of Asgard and the Bi-Frost Bridge immerse you in these flights of fancy.

Thor:Ragnarok is presented in its original aspect ratio of 2.40:1. The 1080p image is arrived at with an AVC MPEG-4 codec at an average 35 mbps. This is certainly one of the more colorful of the MCU films. Grandmaster and his planet of minions offer vivid reds and bright greens, particularly with the green celebration of The Hulk. Bright shiny spaceships gleam. Black levels are rich in shadow definition. I would have liked to have seen the detail of the 4K image, but Disney didn’t send that option along.

The DTS-HD Master Audio 7.1 is often alive with the typical sounds of heroes doing heroic things. Surrounds are as aggressive as an Incredible Hulk on steroids, from ships to weapons to crowd cheers and jeers in the arena. It’s an immersive experience all the way around… your theatre. Subs explode with the energy you’ve come to expect in these films, to be sure. Dialog manages to cut through it all. It’s an impressive sound design even if the synth score really doesn’t do a lot for me. The Led Zepplin kicks… well… you know.

Featurettes: (34:24)  Yeah, not an original title. There are five sections with a handy play-all option. This is mostly a character-focused collection of features that splits up the main characters and also the director.

Marvel Studios – The First 10 Years – The Evolution Of Heroes: (5:23) It includes clips from many of the MCU films and gives us a sneak peak at the upcoming Avengers film. There are also interviews with the stars of many of these films as the features trace the decade of films it took to get this far.

Deleted Scenes: (5:43) There are five with a play-all option.

I won’t give them away here, but look for some cameos, Easter eggs, and two stingers. So be sure to watch the end credits. This will be your last MCU fix until early next year when we’ll get The Avengers: Infinity Wars (5/4/18) rather close together with the recent release of Black Panther. We’ll finish next year with Ant-Man And The Wasp (7/6/18). “Thor, I sense a great change in your future. Destiny has dire plans for you, my friend.”

Gino Sassani is a member of the Southeastern Film Critic's Association (SEFCA). He is a film and television critic based in Tampa, Florida. He's also the Senior Editor here at Upcomingdiscs. Gino started reviewing films in the early 1990's as a segment of his local television show Focus. He's an award-winning recording artist for Omega Records. Gino is currently working on his 8th album Merchants & Mercenaries. Gino took over Upcomingdiscs Dec 1, 2008. He works out of a home theater he calls The Reel World. Favorite films: The Godfather, The Godfather Part II, The Body Snatcher (Val Lewton film with Karloff and Lugosi, not the pod people film), Unforgiven, Gladiator, The Lion King, Jaws, Son Of Frankenstein, The Good, The Bad And The Ugly, and Monsters, Inc.
A Wrinkle in Time Contest: Win When The Starlight Ends From Cinedigm