Posted in: Disc Reviews by David Annandale on January 22nd, 2002

In 1993, Virginie Despentes burst onto the French literary scene with Baise-Moi (“F**k Me”), a snarling novel who’s unblinking, deadpan, yet philosophically pointed excess places it in the tradition of Sade. In 2000, Despentes and Coralie Trinh Thi co-directed and scripted this adaptation, which has already forced the French government to re-evaluate its ratings rules.

A hardcore (in every sense of the word) Thelma and Louise by way of Henry: Portrait of a Serial Killer, this is raw, vital, piercing cinema, with searingly real performances from the leads. It is strikingly faithful to the source novel, though it does shy away from the novel’s nasty child murder scene. I can’t help but wonder, though, if this print might not be missing some nastiness: the running time is indicated as 77 minutes, but the film actually runs 74.

Considering the low, low-budget nature of the film, the audio is surprisingly good. The constant music, an integral part of Nadine’s character (her primary method of blocking out the world), works better here than in the book, and the surround mix creates the same effect in us as it does in Nadine. The rear FX are not bad either, again going beyond what I would have expected.

If ever a movie cried out for commentary, this is it, and sadly, there is no such feature. What we have is the trailer, a flashcard, poster and photo galleries, and some excerpted reviews, both pro and con the film. Some of the more outraged reviews are particularly interesting, telling us more about the critics’ fears and insecurities than they do about the film. The menu is fabulous: a fully animated and scored multi-screen effort that plunges us immediately into Nadine and Manu’s world.

This is not a film where neutrality is an option. It forces you to take a stand, both on the issues the film raises, and on the nature of the film itself. The release leaves something to be desired, but the fact that Baise-Moi is now broadly available is terrific in and of itself. Highly recommended. 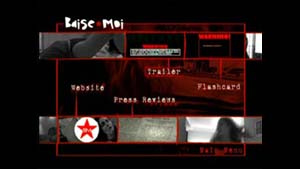 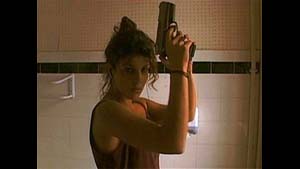 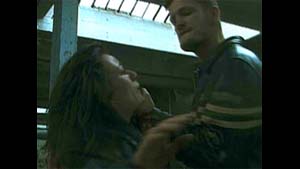