Posted in: Disc Reviews by Archive Authors on May 28th, 2003

This, the third DVD release of T2, reiterates the genius behind this film. With this disc, we are given the same extended edition and theatrical version as found on the Ultimate Edition release, but the new High Definition transfer found on this Extreme Edition makes this 10+ year old film look brand new.

This disc is set to play the 16-minute extended version of the film. If you prefer the theatrical version, on the main menu, go to Sensory Control, and hit the right arrow on your remote 5 times. After …ou have done this, you will notice “The future is not set” appear on the right, and the theatrical version is now accessible.

Terminator 2 was a groundbreaking film. Not only were the special effects groundbreaking at the time of the theatrical release (1991), but they still match up nicely with today’s technology… and that speaks volumes. It is great to see this film presented with a transfer taken from a High Definition source… and this release coincides nicely with the theatrical release of Terminator 3: Rise of the Machines. For those of you who have been stuck under a rock for the past decade, here is the films synopsis…

”He said he’d be back! Arnold Schwarzenegger returns as the Terminator in this explosive action-adventure spectacle. Now he’s one of the good guys, sent back in time to protect John Connor, the boy destined to lead the freedom fighters of the future. Linda Hamilton reprises her role as Sarah Connor, John’s mother, a quintessential survivor whose warnings go unheeded by a world careening toward a nuclear holocaust she knows is inevitable. Together, the threesome must find a way to stop the ultimate enemy – the T-1000, the most lethal Terminator ever created. Co-written, produced and directed by James Cameron (The Terminator, Aliens, Titanic), this visual tour de force is also a touching human story of survival.” – Artisan

This Dolby Digital 5.1 EX audio track will blow you away. Not only is the audio crisp, clean, and focused, it is also powerful. The soundstage is used to its fullest capabilities… surrounding the listeners with nicely positioned sound. The sound effects are loud, but not overpowering. The base is deep, the dialog is clear, and the sound movement is perfect. This is a flawless audio track… enough said.

The big question here is… is the new video transfer noticeably better then the transfer on the Ultimate Edition? Answer… YES! This transfer, taken from a 1080p High Definition source, is absolutely flawless. The colors are bang on, and there are no transfer artifacts or flaws. With this transfer, you can really pinpoint the video detail that this film contains. Not only can you view this wonderful new transfer on your basic DVD player, but Artisan has even included a true High Definition theatrical version of the film on this disc… accessible only though your DVD-ROM drive. You can really tell that a lot of care went into the remastering of T2 for this Extreme Edition DVD release. If you are looking for a new reference quality video transfer… look no further then this disc.

This disc was made to showcase the new video transfer, not to baffle everyone with a million new special features. Although the Ultimate Edition has far more in terms of extras, this disc does have a few notable and extremely valuable extras itself…

T2 fans… you are in for a treat. Included on this disc is the first ever James Cameron audio commentary. As could be expected, this commentary is wonderful. Co-writer William Wisher assists Cameron in discussion many issues/concepts/thoughts throughout the film, and it is fabulous to hear Cameron constantly cut Wisher off mid-sentence to keep the commentary flowing. The audio track is set up with Cameron’s voice coming only out of the front right channel, with Wisher’s voice coming from the front left… creating the feeling of a back-and-forth discussion. This is a wonderfully enjoyable and informative track that all T2 fans should partake in.

”No Feat But What We Make” is a 24 minute documentary that explores the visual effects that made T2 so famous. This featurette starts off looking at the special features behind the film The Abyss, and then goes into how that technology was used in T2. This feature even goes on to interview Peter Jackson on how he incorporated such technology into his filming of the Lord of the Rings trilogy. This featurette is informative, and shows how groundbreaking this film really was.

”T2: On the Set” is a short 8 minute behind-the-camera featurette that shows the cast and crew during filming. There are also a number of outtakes that were captured during the shooting of the film that are located here.

Also contained on this disc is very annoying text commentary that is far to busy, and contains a number of branching (somewhat useless) featurettes. Lastly, you will find a few DVD-ROM features, the aforementioned High Definition theatrical version, and a trailer for (oddly enough) the T2: Ultimate Edition DVD.

I look at this disc as a companion to go along side the Ultimate Edition DVD. This disc does not contain the wealth of special features as found on the Ultimate Edition, but it does contain a superior video transfer, and a wonderful audio commentary. If you had to choose between the two… I would pick this Extreme Edition. 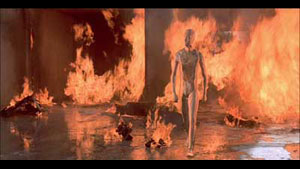 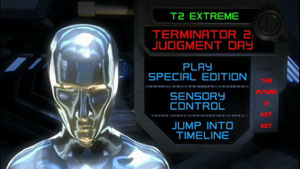 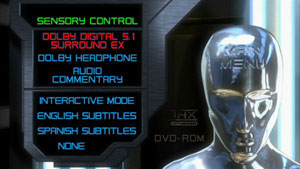