Posted in: Game Reviews by Archive Authors on May 29th, 2003 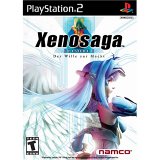 Even though Final Fantasy X-2 is releasing in Japan this month, and some RPG fans might be going ga-ga over an import of that game, other players who may love the Role Playing Game genre should not overlook Xenosaga Episode I: Der Wille zur Macht from Namco–a game with a decidedly complex storyline and polished in game visuals and cutscenes.

Based on the original game Xenogears, this new title is heavily based on sci-fi themes and an intricate, multi-layered plot. The story starts out …ith a young researcher named Shion, whom is aboard a starship returning from a mission in deep space where it retrieved a mysterious artifact amid a war with a strange race of creatures known as the Gnosis.

Shion is in charge of developing and overseeing an attack android by the name of KOS-MOS–a piece of machinery destined to battle the Gnosis that she has become very attached to. However, what originally starts out as a mission from deep space returning to the safety of port, quickly develops into a plot that revolves around humanity and the ethical and philosophical questions of whether robots have souls–all set to an RPG framework.

Players will be most impressed with the high level and consistency of the polished graphics and bright colors. Since this is a game based on sci-fi themes, gamers can expect some out of worldly visuals and graphics. In game characters use hologram computer screens, translucent video displays, and advanced weapons in the many levels.

Most impressive is the amount of detail that went into not only the main characters, but each and every Non Playable Character as well. A soldier standing idly by in a corridor is composed of as many polygons as the main characters that pass them–and the effect is consistently smooth visuals. The character designs draw heavily on anime/manga models which go easily with the sci-fi nature of the game.

Speaking of environments, these are presented just as smooth and unique as the previously mentioned items. It’s refreshing to see some well thought out levels and even battle arenas. Players who may be tired of the standard ‘dungeon’ effect in some RPG’s will most likely find this attractive and a nice change of pace.

Cutscenes are the backbone to the story in Xenosaga though, so be prepared to sit through a lot of them–some which are quite long. Depending on whether or not you are enamored with the plot will weigh heavily on some players or be a delight to others when and where it concerns the cutscenes. The majority of them may be skipped, but if you want to glean any information and semblance of the plot, they will need to be viewed. The are very well done though, and use the same in-game graphics engine to drive the visuals.

Music in Xenosaga is a delightful mix of orchestra movements by the London Philharmonic Orchestra and some standard techno/jazz tunes. At the very least, it is enjoyable and soothing and when it comes time for the battles, it adds sufficient tension and atmosphere to the scenes.

Voice acting is done very well with a cast of veteran actors who add life and personality to the on screen characters. All music, sounds, and speech are presented in normal stereo–so no need to hook up the Home Theater here.

Most RPG fans will undoubtedly be familiar with the standard “turn based” fighting system so many Role Playing Games employ, so those in the know will feel at least partially at home with the battle system in Xenosaga.

However, this does not mean that the battle system is easy by any means. On the contrary, it is a somewhat complex system of Tech Attacks and Normal Attacks–and some characters will even use magical attacks in addition as well. Not only will the main characters–and those equipped in your party–use normal weapons, but there are also battle mechs known as an A.G.W.S. that your player can deploy against the enemy.

All of the playable characters can of course level up their skills and weapons in the game and this is paramount to succeeding in any RPG. One drawback with the gameplay in Xenosaga though is the balance between battles, exploring, and the numerous cutscenes. Players will find themselves sitting through some very lengthy plot driven FMV between battles and this has the effect of breaking up the pace and action of the game.

Yet, the plot is driven and tied to the story related through these scenes, so players will find themselves doing a lot of the same type of battles between cutscene and boss battles in an effort to level up before moving on–a little more focus on action and exploring between plot points would have made for the perfect mix here.

RPG’s, by design, can be tediously long affairs with branching story lines, mini games, and the all encompassing activity of leveling up your character. In this aspect, the game never really ends but just keeps going on and on. The end will eventually be reached, and those fans of the story and the art will most likely hang on to this title.

Yet for those that might be dissuaded by the copious amounts of long cutscenes, and chopped up action segments, Xenosaga might not be for you. However, if you enjoy a sci-fi story which draws some plot content from the film Ghost in the Shell and the book I, Robot, then give Xenosaga a whirl.