Posted in: Game Reviews by Archive Authors on June 10th, 2003 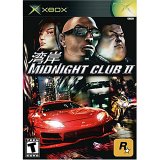 Last fall when Grand Theft Auto: Vice City came out for the PS2, gamers got to witness a myriad of gameplay options. Not only could you shoot, beat up, hold up, and run down people virtually everywhere, but another big draw to the game was the fact that you could jack any car, anywhere, and haul ass around town in it.

Now Rockstar Games has recreated the racing parts of the Grand Theft Auto series and added some great extras in Midnight Club II–the sequel to Midnight Club–out …ow for the Xbox console. Players get the chance to trade paint and speed dangerously through the city streets of Paris, Los Angeles, and Tokyo.

The visuals are, at the very least, consistent with those seen in the recent GTA: Vice City title on the PS2. Midnight Club II runs at a healthy framerate, but it’s not without its glitches either. It’s easy to draw a comparison to Vice City because the graphics are so much alike. However, there have been some improvements to the way the game seems to draw textures and objects further in the distance–they appear to spool much more smoothly here.

One thing that has made the transition to MCII from other Rockstar titles is the tongue-in-cheek humor that was so prevalent in the Grand Theft Auto series of games. For instance, Staples Center, in downtown Los Angeles, has been renamed Snapper Palace in the game. Other funny jokes and sight gags can be seen around the many streets you will find yourself racing on.

Overall, the graphics do a fine job of conveying the fast and harrowing nature of street car racing. Huge skyscrapers lit up at night can be seen in the distance and oncoming traffic, pedestrians, and the police all occupy the crowded streets and highways where the racing goes down.

This Xbox offering fares a bit better than its PS2 brethren in the fact that the Xbox has a much beefier graphics engine than the Sony PS2 and as such, the textures and models are a bit smoother and move much more fluidly. Added onto that is the advanced graphical features of the Xbox to display MCII in 480p and a 16×9 resolution.

The strongest feature of Midnight Club II is without a doubt the soundtrack and associated sound options for the game. The music is an interesting mix of Rap, Techno, House, Bass and Drum, and Atmospheric. Some of the groups appearing on the soundtrack are Art of Trance, Felix Da Housecat, Blumarten, Tre Little and an assortment of others. The music fits perfectly with the action onscreen and will have your sub woofer thumping away as you screech through alleyways.

Speaking of sub woofers, Midnight Club II contains some fantastic sound output options for a PS2 title. Not only does it support the normal stereo sound, but players using their Xbox hooked up to a Home Theater can enjoy true Dolby Digital sound. This adds fantastic realism to the harrowing nature that can be illegal street racing.

There is not much plot to MCII other than driving like a maniac. Players pick up a car in L.A. and start a race against a 380 pound man named Moses. Aside from Moses, there are some other interesting character racers that you will meet as you progress through the game. Each city has several that you must beat in order to progress and win new features and cars.

As you win races, features in the Arcade mode and Career mode become unlocked and are available for the next race. The types of races to be driven are a mix of time trial, first to win, checkpoint accessed, and survival modes–players will be using a number of vehicles and motorcycles to complete the job.

The learning curve and the pace of the game is average and not too terribly steep, although some of the more frustrating aspects of street racing and sloppy controller input are present here. One could argue that the game wouldn’t be a challenging enough if the racing streets were wide and devoid of traffic–so a little patience is needed on some of the tougher missions.

Midnight Club II is not only a packed racing title for one to four players sharing the same console, but it allows a system link of up to eight players using two separate consoles.

MCII also supports the Microsoft LIVE option. If a player has the Broadband service on their console, then MCII will allow you to surf online and find others to race against. Advanced LIVE features here are the popular Friends list, Voice Chat, and Scoreboards which can be accessed to see one another’s stats.

The addition of the LIVE features add supreme shelf life to the title and ensures that the action never really gets stale. Players will find much to explore on their own in the single player, and will find some tough competition out in the real world through the networking option.

Midnight Club II is a fast, slick racer with excellent sound options and varied gameplay. A definite buy for racing fans everywhere, and probably the best racer to date on the Xbox videogame console.