Posted in: Game Reviews by Archive Authors on June 18th, 2003 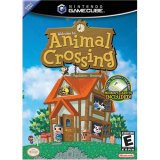 Few titles have the ability to be both cute and popular amongst all types of players, yet with Animal Crossing, this is exactly what one gets. The game has such great playability to it, that everyday brings something new and refreshing to the table. The character and town designs are almost unbearably cute–but in a good way that adds feel and depth to the overall game. Are you ready to be wowed by a classic Nintendo title? Then pack your bags–you’re moving to Animal Crossing !

Refreshingly different in its approach and visual design, Animal Crossing is cute and there is no other way to really sum it up. At first, hardcore videogame fans may think that something that looks like a cartoon for six year olds wouldn’t be their style and may pass on it. However, this is where the visuals may give the wrong impression of the overall nature of the game. It may look cute and sappy, but underneath the eye candy is some ridiculously fun gameplay.

The colorful nature of the visuals and the interesting character designs–all of the in game characters are animals–really work well with the premise of the story. The great thing about your town (once you get settled in) is that new characters will move to it and it will accurately display the seasons according to the clock set on your GameCube. The changing seasons will bring rain, wind, and snow to your little hamlet and the people of your town will react accordingly.

To reflect the premise that all animals live in your town, there is no speech included in Animal Crossing but rather what the manual refers to as “Animalese”. Players can change the squabbling sound that passes for “Animalese” for some basic sounds when you hold a conversation with someone if the Animalese becomes to much to listen to.

All sorts of sounds and music populate the world of your little town, and all of it is presented in normal stereo. There is a wandering musician who stops into your town every Saturday night and new music can be heard by attending his free concerts in front of the train station.

So much to do! The gameplay experience with Animal Crossing is extremely open ended and by far this is the formula that makes the game so addicting. After moving to your town, you will have to run some errands for the local store owner who is named Tom. After you run errands for him though, you are totally on your own to fill up your days as you see fit.

Time can be spent running errands for the others in town who reward you with money and sometimes furniture. These tasks can be a little mundane and are not my particular favorite, yet the option exists to accumulate some cool swag from the locals. There are many fish to be caught in the surrounding streams and ocean, and some fetch a hefty price from Tom whom buys all the goodies you acquire in the game.

Bugs, fruit, furniture, clothes, and fish can all be traded and bartered with to the locals and Tom for items you may want. Decorating your little house is another pastime that can border on obsessive when finding that last piece of furniture to complete your home theme can turn into something akin to the search for the Holy Grail.

Just because your town is small though does not mean you are stuck there for good. If players have a GameBoy Advance, they can travel to a tropical isle where further adventures await. Gamers can also visit the towns of their friends by taking the train in the game (on your console) and then inserting your friends’ memory card (with their town data on it) in slot B on the GameCube. New faces and places to check out!

With all the little activities set up in the game, plus new events which take place during the month, Animal Crossing is a game that keeps dishing out the fun day after day and month after month. Most major holidays are celebrated in the game just like they are real life, so Thanksgiving and Christmas always offer something cool for you to do.

The GameBoy connectivity is put to good use here with not only the ability to travel to another island, but also as a way to create, edit, and implement designs for clothes and other objects in the game. On top of that, E-Cards can be purchased which have on them some classic Nintendo video games which can be played inside Animal Crossing.

Animal Crossing is a cute, addicting game which caters to all types of gamers–and this is what Nintendo is famous for; creating fun games that stand the test of time and are a ball every time you turn them on. Everyone should check this game out at least once just to see the innocence of it all.