Posted in: Disc Reviews by Archive Authors on October 23rd, 2003

It has taken years to finally get a block-buster Hulk film produced, and the outcome has received mixed reviews. Grossing $132 million in the domestic box-office is usually nothing to sneeze at, but considering it cost $150 million to make the Hulk, it must still be looked at as disappointing. Many would argue that the animation was unrealistic, other would argue that it was amazing… each to their own. I, myself, found the film quite disappointing. I found the animation far too overdone, and the story to be lack…uster. I did really appreciate Ang Lee’s direction, but that is about as far as my praise will go for this film.

For those of you who have been stuck under a rock for the past 20 years, here is the basic storyline…

”After a freak lab accident unleashes a genetically enhanced, impossibly strong creature, a terrified world must marshal its forces to stop a being with abilities beyond imagination.” – Universal

The Dolby Digital 5.1 audio track on this discs is very good. There are moments where the film is very dialog driven, and other moments with extremely action sequences. This track does a nice job encompassing both styles of audio, creating a nice overall feel. The base is overwhelming in some sequences, but that is what most people will be looking for when watching the Hulk. Sound separation is good, the score is effective, and the soundstage has moments of brilliants.

As is the case with the audio, the video on this disc is very good. The colors are extremely vibrant… especially the vivid lime green of the Hulk. The darks are deep, creating a nice contrast, and the 1.85:1 anamorphic transfer, although not perfect, is free from most defects. You will notice the occasional spec of debris, and some mild grain in a few sequences within the film.

Disc one of this two disc set contains only one special feature: a feature length audio commentary featuring director Ang Lee. This track is at times insightful, but at other times boring. There are a number of moderately long silences, and the listen can easily lose interest. All-in-all, this commentary is worth checking out… even if you do not get all of the way through it.

This film will not be enjoyed by everyone, but so is the case with most comic-book films; for most, it will be either adored, or despised. I was not a huge fan of the film, but the DVD presentation is very good. The audio, video, and extras make this disc worth checking out. 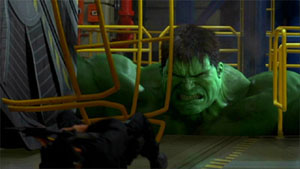 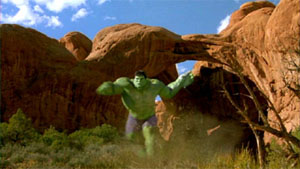 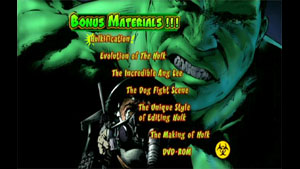 L’Auberge Espagnole It Runs in the Family