Posted in: Disc Reviews by Archive Authors on November 19th, 2003

If you like a high-energy action/comedy, you have met your match with Bad Boys II. Michael Bay has once again created a wonderful cinematic experience with this film. Will Smith and Martin Lawrence have never been funnier; they have the best on-screen chemistry I have seen in a while. This sequel has more action then its predecessor, and is much more graphic… in a good way. Bad Boys was a great film that started Bay’s career, and Bad Boys II continues his legacy of high-energy action flicks.

”The…danger quotient is heightened and so are the laughs in this new installment as Miami narcotics detectives Marcus Burnett (Lawrence) and Mike Lowrey (Smith) become part of a high-tech task force assigned to stem the flood of designer ecstasy into Miami. They unwittingly uncover a deadly conspiracy involving ruthless drug lord Hector Tapia, played by Jordi Molla, who is determined to expand his empire and take control of the city’s burgeoning narcotics trade, killing anyone who stands in his way.

To make matters worse, Marcus’ beautiful sister Syd (Gabrielle Union), an undercover DEA agent, gets caught in the crossfire, forcing our heroes to the edge of the law. The assignment takes on further complications when romantic sparks start to fly between Mike and Syd, driving her overly protective brother completely around the bend.

But Marcus and Mike must overcome their difference to bring down Tapia. And when Syd’s cover is jeopardized, it’s up to the Bad Boys to rescue her.” – Columbia-Tristar

As can be expected from any Michael Bay film, this disc looks great. The transfer is completely free of all defects; no dirt, no debris, and no compression artifacts. The colors are magnificent, and yet natural, while the contrast is bang on. I dug deep to find any flaw with the video quality and all I came up with is a mild grain (hardly noticeable) during some of the outdoor/underwater sequences…. and that is just me being picky. This discs looks great.

Now this is how a DVD should sound! The Dolby Digital 5.1 mix on this disc is flawless. Sound fills the soundstage from all angles. From bullets whizzing overhead, to cars racing by, you will be emerged by sound. The soundtrack is powerful, yet not overdone, with perfectly positioned sound. The dialog is crisp and clean, and the bass is deep and powerful. This audio track should be used to demo your Home Theater… it sounds great.

At first look, this disc did not seem to have too many special features. But after digging around a bit, I was overwhelmed with extras; and not just fluffy pieces, but extremely valuable and entertaining features.

First up are two fabulous featurettes. Stunts (9:28) shows how three of the films stunt sequences were created, while Visual Effects (18:37) breaks down a number of sequences on how the visual effects were melded with live action to create the desired effect. Both of these features are highly recommended… they are some of the best featurettes I have seen in some time.

Next up, we have a collection of deleted scenes. I am glad to report that these scenes are not your average “thank goodness that this nonsense was cut from the film”. Rather, they are very funny, worth while sequences. They must have been cut to increase the films flow, but they are definitely worth a watch.

The most surprising section of this disc is the Sequence Breakdowns. When clicking on this single link from the main menu, you are taken to an exorbitant amount of content. They have 6 sequence breakdowns, each of which contains the sequence from the film, a making-of the sequence featurette, hundreds of Storyboards, and the ability to read the script for the scene. These extras are well put together, and allow you to learn everything possible about each sequence that is included.

This disc also includes production notes, which are more like a Production Diary. Included are 19 clips (interviews / behind the scenes footage / Etc.) that were taken throughout the filmmaking process. This, as is the case with all other extras on this disc, is valuable and worth a watch.

Lastly, this disc includes a Jay-Z music video, and a number of theatrical trailers.

This disc should find its way into everyone’s DVD collection. The audio/video quality is great, and the extras are absorbing and entertaining. The film is a fun ride, and should be enjoyed by most action/comedy fans. Highly Recommended. 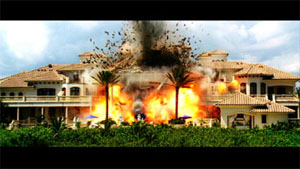 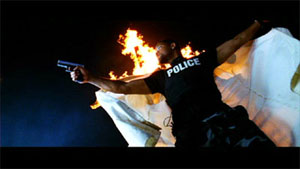 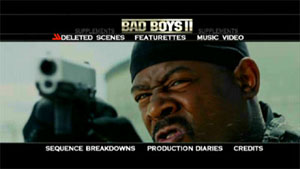