Posted in: Disc Reviews by Archive Authors on November 19th, 2003

Escape from New York not only made the career of Kurt Russell, and helped to grow the John Carpenter legacy, but has also gain cult status amongst many film fanatics. This film, with its unique plot, and raw style, was the first of its kind… and continues to be a fan favorite 22 years after its theatrical release.

”In a world ravaged by crime, the entire island of Manhattan has been converted to a walled prison where brutal prisoners roam. But when the U.S. president (Donald Pleasence) crash-lands …nside, only one man can bring him back: notorious outlaw and former Special Forces war hero Snake Plissken (Russell). But time is short. In 24 hours, an explosive device implanted in his neck will end Snake’s mission, and his life, unless he succeeds.” – MGM

It is hard to believe, but Escape from New York is now 22 years old… and it looks pretty good for its age. The transfer looks very good, with only minimal debris and grain, and with colors that are accurate and maintain the gritty feel of the film. The darks are deep, and are sometimes overpowering to the point of making the scene hard to see… but I think that the darkness was intended by the filmmakers. This transfer is marginally better then the previous DVD release, but you will not notice a jaw-dropping difference. All-in-all, MGM has done a nice job with the video on this release.

Unfortunately, the audio on this disc is substantially worse then the video. The 5.1 Dolby Digital mix sounds hollow and dull. This re-mixed soundtrack tries to have good sound movement, but it doesn’t hit the nail on the head. The soundstage is filled artificially with an awkward, unnatural sound. The dialog is muffled and unfocused, and the score does not contain much punch. This audio track is not horrible, but they should have stuck with a more simplified 2.0 track here.

Disc one of this two-disc set contains 2 audio commentaries. The Carpenter and Russell commentary, recorded in 1995, contains some good give-and-take about the film, and is entertaining as well as informative. The second track, featuring producer Debra Hill and production designer Joe Alves, is far more boring. You will get the basic discussion here, but it is dry and will not hold your interest.

Disc two starts off with a collection of three featurettes. The Return to Escape from New York Documentary is a retrospective look at the film conducted through a number of interviews and clips. Topics discussed are the cast, the characters, and the story. The Making of ‘John Carpenter’s Snake Plissken Chronicles’ is a text based feature about the creating of a Snake Plissken comic book. There are a number of storyboard-like graphics, but this is still a useless feature. The third featurette, ”Snake Bites” Trailer Montage is another useless extra that is just what it states… a trailer montage.

There is also a deleted “first reel” sequence that is the opening to the film. This sequence which shows Plissken’s capture is dry by itself, but is very entertaining if viewed with the optional commentary by Russsell and Carpenter.

Lastly, this disc contains some theatrical trailers, and a photo gallery.

Although this disc has its flaws, it should still be owned by all Escape from New York fans. The film has become a cult classic, and should really live a new life on DVD with this disc. Recommended. 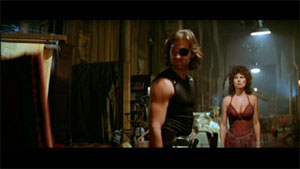 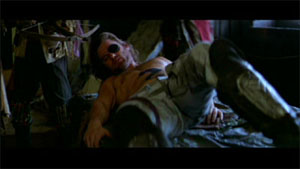 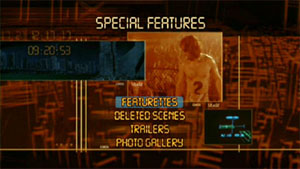