Posted in: Disc Reviews by Gino Sassani on February 22nd, 2004 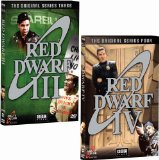 The 1980’s saw a second British entertainment invasion reach the shores of America. That’s when the BBC began to unleash its peculiar brand of humor mixed with sci-fi on PBS stations in the US. College campuses all over the land were tuned to the likes of Dr. Who and later Red Dwarf.

There’s no question that this stuff is not for everyone. Red Dwarf brought us the cheesy f/x and dry humor of Tom Baker’s Dr. Who and added a generous helping of Monty Python and Benny Hill. With the third season, however, thi…gs began to change for Red Dwarf. Set production designer Mel Bibby joined the program, giving it a much sharper look than the previous two years.

Although the extremely low budget did not change, Bibby made the entire program look higher budget. The stories appear much more outrageous, if that’s even possible. The series III Backwards episode is perhaps one of the most original 30 minutes of any television program.

You can purchase these episodes in two ways. There is a double-pack of series III & IV or you can buy the series you wish individually.

Lister (Charles) smuggles his cat on the ship Red Dwarf. He is punished by being put into stasis. When he awakes he finds it is 3 million years later, his cat has evolved into a humanoid (John-Jules), his best friend, Rimmer (Barrie) is just a hologram, and the antics have just begun.

The discs contain a fair Dolby Digital 2.0 track. Dialogue is everything, at least audibly, to Red Dwarf. You can hear the dialogue without any trouble on this release. Some of the harsher music cues contain some high-end distortion. You must remember the budget and age of the original material. The transfers are not to blame for any of these minor quirks.

There are a great number of cast commentaries that are almost as funny as the show itself. They are well worth checking out.

Red Dwarf’s episodes are each presented in their original television 1.33:1 full frame format. Once again the budget and age are important factors to keep in mind. The picture is often soft with noticeable color saturation. Darks are mostly mediocre. We’re talking 1980’s video here. Still, I think you will find the DVD presentations to look better than they did on your dorm TV screen. Set shots are far superior to any location shooting as was typical with BBC programs of the time.

These discs are loaded with extras. Each season has 2 discs. The first contains the collection of six episodes while the second is packed full with some great extras. Both contain over 20 minutes of deleted footage, Generous photo galleries, Isolated Music Cues, Excerpts from Red Dwarf Books on Tape, “Smegs Up” a rutty good gag reel, and the standard trailers and bios.

I will break the remainder of these features down by season.

With the return of Dr. Who next year to the BBC airwaves, can Red Dwarf be far behind? The collections are very comparable to those for Series I & II. Some collector’s cards of the cast come in the Series IV box. The booklets are pretty nice additions as well. If you get it, you’ll want to get this collection. If you don’t get it, stick with The Flintstones. “Isn’t Wilma hot?”

Gino Sassani is a member of the Southeastern Film Critic's Association (SEFCA). He is a film and television critic based in Tampa, Florida. He's also the Senior Editor here at Upcomingdiscs. Gino started reviewing films in the early 1990's as a segment of his local television show Focus. He's an award-winning recording artist for Omega Records. Gino is currently working on his 8th album Merchants & Mercenaries. Gino took over Upcomingdiscs Dec 1, 2008. He works out of a home theater he calls The Reel World. Favorite films: The Godfather, The Godfather Part II, The Body Snatcher (Val Lewton film with Karloff and Lugosi, not the pod people film), Unforgiven, Gladiator, The Lion King, Jaws, Son Of Frankenstein, The Good, The Bad And The Ugly, and Monsters, Inc.
Blow-Up Herod’s Law (La Ley De Herodes)