Posted in: Disc Reviews by Archive Authors on December 6th, 2004 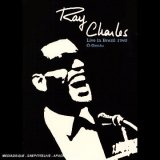 With the popularity of the bio-pic Ray, Rhino comes out with O Genio: Ray Charles Live in Brazil 1963. Ray Charles is truly an O Genio, and this disc confirms that. Jazz, gospel, blues, rock n’ roll, this guy did it all. We have two performances recorded live in Sao Paulo. Each performance runs about an hour long. Ray is accompanied by a full brass orchestra and a lovely collection of female back-up singers. The first show gets off to kick-butt start with Charles’s famous hit “What’d I Say”. The …est of the disc won’t let anyone down.

Recorded in Dolby Digital 2.0, the track sounds remarkably good. Rhino does an excellent job of re-mastering and mixing. But I’m guessing, with Ray Charles’s obsession with sound quality, the original source material was well preserved. Crank this DVD up. Your rear speakers might get bored, but the front speakers get a great workout.

You might not be buying this disc for the video, but the audio itself warrants a purchase. I’m trying to be forgiving of the video quality; it’s not the greatest. The quality reminds me of an old, black and white live broadcast. The first show is better though. The second show has a bootleg quality to it. There are lots of lines and scratches and some old VCR “tracking” type visuals; it does add to the charm though, it looks like it’s just been “dug up”. But I’m thinking this is the best the video ever going to look. Not much can be done with the 1:33:1 source material.

Some amusing Portuguese commercials. The commercials were done “live” and served as a break to the music.

This is a must buy for any Ray Charles fan. Maybe even for any music fan. The video isn’t great, but you can get used it. It’s the music you want to hear. And damn it’s good, that’s “what’d I say”.