Life Aquatic with Steve Zissou, The

Posted in: Disc Reviews by Archive Authors on May 4th, 2005

Wes Anderson has been a breath of fresh air since he hit the Hollywood scene in 1996 with his first feature length film Bottle Rocket. Since then, Anderson has continued to stretch the imagination of film-goers with fabulous films such Rushmore (1998), The Royal Tenenbaums (2001), and now with The Life Aquatic with Steve Zissou (2004). Anderson’s films are not for every joe-schmo film fan; his work could even be described as an acquired taste. But from a creative and visual perspective,…Wes Anderson’s work stands by itself.

Anderson has a thing for using actors that he is comfortable with, so in The Life Aquatic, we see many return actors from his previous films – Bill Murray, Owen Wilson, & Anjelica Huston. Fresh to this film, and with a good chance of appearing in future Wes Anderson projects, include Cate Blanchett, Willem Dafoe, & Jeff Goldblum. With a cast that reads as a whos-who of Hollywood, how could this film not be entertaining?

One thing that can definitely be said about Anderson’s films is that they are visually stunning. With a subtle mixture of digital animation mixed into the live action film, and a genius cinematographic mindset, The Life Aquatic is made to feel like you are right in the picture. Anderson’s style has started to appear in other Hollyword works, such as David O. Russell’s direction of I Heart Huckabees. 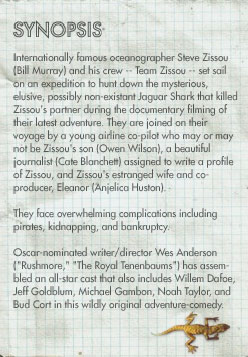 This DVD offers up a perfect 2.35:1 anamorphic widescreen transfer. The colors are vibrant when intended to be vibrant and washed out when intended to be washed out. The blacks are extremely deep, helping to create wonderful contract. The stunning visuals all come to life in perfect clarity. There are no noticeable defects to make mention of… another great Criterion presentation.

All of Anderson’s films seem to have a quirky yet appealing mix of score and soundtrack elements, and The Life Aquatic is no exception. This disc sports both Dolby Digital 5.1 and DTS ES audio tracks… both of which are equally good (with a slight edge, as usual, to the DTS track). The soundstage is used effectively, and the score sounds great. There could have been a touch more activity from the surround channels, but they were used adequately. I found the dialog a little muffled at times, but for the most part, it came across clearly and accurately. While not as good as the video quality, this disc still sounds very good.

Here is a breakdown of everything you will find on this 2-disc release:

This is a wonderful overall DVD presentation. The film, video, audio, and extras are all brilliantly crafted to give the viewer the ultimate Life Aquatic experience. This set should be owned by all fans of Anderson’s work, and any true DVD collector.

Dodgeball (Unrated) Are We There Yet?