Harry Potter and the Goblet of Fire

Posted in: Disc Reviews by Archive Authors on February 28th, 2006

Utter the simple phrase of Harry Potter to any age, and it is nearly guaranteed that they will know what you are speaking about. Since becoming a worldwide phenomenon in 1999, the Harry Potter series have been turned into everything from video games to bathing products. Most notably, the series have been turned into a set of excellent films that are successful, for the most part, in recreating the major elements presented in the novels by author J.K.Rowling.

With this being the fourth film in the series of …even, I had a few fears going into this film. With this book being the longest of the four books at this point, I was worried that new director Mike Newell would’nt be successful in presenting all the ideas Rowling went over in the book. While the film does not mention every little detail (the most notable gripe is the lack of the Dursley’s), Newell is very successful in bringing the action, suspense, fear, emotion, and growth of the characters to the big screen in stunning style.

Harry Potter and the Goblet of Fire continues on the story with Harry and his friends continuing their adventures at Hogwarts School of Wizardry. Before they arrive at the school though, Harry and his friends are invited by the Weasley family to attend the Quidditch World Cup. While here, Voldemort and his Death Eaters attack the event sending a message that Voldemort is indeed back and he means bad things.

The biggest plot of the film revolves around the Triwizard Tournament which is a tournament where three finalists are chosen by the Goblet of Fire. The three names are Cedric Diggory from Hogwarts, Viktor Krum from Durmstrang and Fleur Delacour from the group of Beauxbaton girls. When the Goblet spits out a fourth name, Harry Potter’s, everyone is at a loss of words. According to the rules, you must be 17 to compete in the Triwizard Tournament. With Harry being only 14, Dumbledore can’t do much as he mentions that what the Goblet wants, the Goblet gets. But the real question is who put Harry’s name in the Goblet?

The four students must compete in three trials: The first being fire-breathing dragons, the second being an underwater rescue mission, and the final being a huge dark maze. But what awaits Harry in the maze is unexpected by the Triwizard rules, for Voldemort awaits Harry. Not in his stone, pale look from The Sorcerer’s Stone, but rather in a completely dark, sinister, evil, and the malevolent fury of the great Ralph Fiennes. Speaking of Fiennes, he brings Voldemort to the screen in the exact manner how I pictured Voldemort to look like as I was reading the book. Voldemort looks like a big pale person, with a slug like look for a face, snake looking nostrils and gooey skin. Fiennes acts with exuberant finesse bringing the horror and evil of this man for all of us to view.

With Goblet of Fire being the fourth film, we can easily see the talent that J.K.Rowling has in her mind. She brings these characters to life with such simple ease. All of her novels, up to book six, have created a world that any age can pick up and become involved in. While I’m mentioning her ideas, I did especially like the character of “MadEye” Moody portrayed by Brendan Gleeson. His first appearance is one of puzzlement. He has an artificial limb and a glass eye that he can zoom in and out with. Gleeson brings Moody’s oddness to the table in fine form dealing with the stares from students to sort of patching a relationship with Harry after dealing with Malfoy in an extremely hilarious scene.

I must mention the director of the film, Mike Newell. Newell was originally tapped to the very first film, but turned down the offer. Looking up his name on imdb, I notice his resume of softer films like Four Weddings and a Funeral to his darker films like Donnie Brasco. Both of these films served him excellently as Harry Potter and the Goblet of Fire has a wide arrange of emotions to address from Harry confronting love to the pain of death. Newell’s experience helps bring these emotions to the screen with ease.

With Goblet of Fire running at nearly 2.5 hours, I felt the running length was perfect for the film. Scenes of action (The Tournament) were done perfectly, while scenes of pain (the ending sequence of the third trial) were done with emotion. I’m hoping that Warner Brothers and new director David Yates can bring The Order of the Pheonix to the screen in the same order they did with this film. The Harry Potter franchise keeps on running down the road with no signs of running out of power.

Harry Potter and the Goblet of Fire is presented in a Widescreen Aspect Ratio of 2:35:1. The transfer, like those of the previous Potter releases, is rather dark and grimy, but not dark or grimy in a negative aspect, but rather in a very pleasant aspect as the imagery appears lovely. I noticed very little areas of edge enhancement, very little softness and overall flesh tones were fabulous. We are given a great range of colors, from dark blacks, to bright greens. The image quality is top-notch.

We are given a Dolby Digital 5.1 Surround Sound Audio Track that is just like we would expect the track to be. The sub provides deep, clear bass, dialogue sounds crisp and clear from the center channels, and the crowds yelling at the opening Quidditch match zips by our ears from the rear channels. For a true test of the audio track, do yourself the favor and pump the volume at the entrance of the Viktor Krum during the Quidditch match.

The Harry Potter film series are continuing to grow and grow in terms of quality of film. The films are trying to tie in all the important aspects as the books get longer and longer while still presenting a tight package. Harry Potter and the Goblet of Fire is an entertaining film that is given a sparkling transfer and an equally great audio track with a few noteworthy features. Add in all the mentioned positives and you are given a great DVD that any Potter fan will want to add to their collection. Recommended. 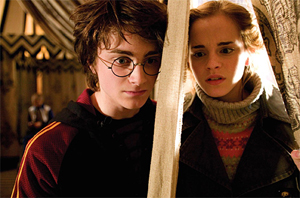 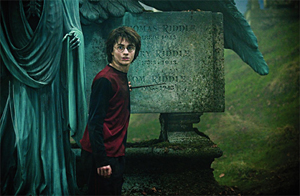 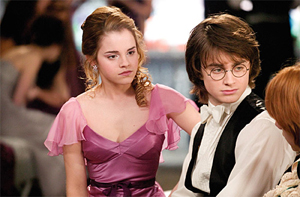 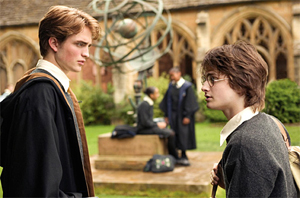