Chronicles of Narnia: The Lion, The Witch, and The Wardrobe

Posted in: Disc Reviews by Archive Authors on March 24th, 2006

After the transformation of the Harry Potter and The Lord of the Rings books into hugely successful films, it was only a matter of time before someone decided to tackle C.S. Lewis’s famous novels The Chronicles of Narnia. Both of the aforementioned books into movies were excellent because, even though they didn’t include every little detail presented in the novels, fans still embraced the films for what they were. They brought a majority of the presented themes and ideas in the books and showed u… them in a live action manner via the film. Similar to the seven part Harry Potter series, would it be possible for the classic seven part Narnia series to have a successful transformation into film?

Both C.S. Lewis, author of the famed Narnia books, and J.R.R. Tolkien, famed author of the Rings books, were said to have been friends who taught at Oxford at exactly the same time. They both enjoyed smoking pipe, drinking in the same pub, taking Christianity seriously, and writing. Lewis loved Tolkein’s style of writing and the universe he created for the Rings books, but Tolkein never seemed to return the same affection to Lewis’s Narnia books. Many say this is because Tolkein actually created a vast universe for his novels, while Lewis just used his native country as the setting.

When the film opens, we see two brothers and two sisters from the Pevensie family. They’re all being evacuated from London and are being sent to live in a vast country house where they’ll be safe from the nightly Nazi air raids that took place where they lived. One day, while playing hide-and-seek, Lucy (Georgie Henley), the youngest of the four, ventures into a wardrobe that seems to open directly into a snowy landscape. Lucy meets a faun, a creature similar to the leprechaun. Lucy first has this grand adventure and then is shortly joined by her brother Edmund (Skandar Keynes) and the two older siblings, Peter (William Moseley) and Susan (Anna Popplewell). I suppose the type of adventures these four experience were the type of adventures any of us would have loved to experience as children. Grand, vast adventures full of fauns, lion, and witches. Wait a second. Witches?? Let me take a step back.

It turns out that the Witch I speak of is the witch who has kept Narnia in a frigid cold for over a century. Under the witch’s rules, Tumnus (James McAvoy) has been told to deliver little Lucy to the witch. Tumnus, a faun, decides to let Lucy go. When Lucy returns to her country, where no time at passed at all, she explains the story to anyone who will listen. Her siblings soon follow her back through the wardrobe and we soon met the famed Aslan (Liam Neeson). Aslan, after Edmund is captured, must die for Edmund’s sins. This connection in the film is easily seen via Christ dying for our sins (keep in mind that Lewis was very religious). Aslan, like Christ, has an eventual resurrection. This leads to a huge climax, which we are not sure of by the end of the film since there are six more books in the Narnia series.

The Director of the film, Andrew Adamson, directed both of the hugely successful Shrek films and has dealt with the realm of special effects via Joel Schumacher’s two Batman films. After watching Narnia it has become extremely evident that Adamson has a type of gift in that he is able to successful capture both comedy and action in a manner that makes this imaginary world both scary and charming. Lewis, in 1959, wrote that he was very worried and down right feared these books ever turning into films because he thought the animals would look kind of buffoonish and weird. It’s obvious that Lewis was thinking of puppets and not the simply jaw-dropping CGI characters we’re given in Narnia.

Narnia contains such convincing looking characters that, at first glance, one may wonder if the creatures were created or brought in from the local zoo. As many read this, Narnia is boasting off it’s Academy Award for Achievement in Makeup, which was richly deserved as every character, whether real or not, looks amazing. The story, simply put, is very charming and sweet. I did feel that toward the end Disney was really giving us a feast for the eyes of what is to come in the series. Like the recent PG-13 rating for Harry Potter and the Goblet of Fire, don’t be surprised if by the 4th or 5th Narnia film we see an R rating. I tended to notice that a lot of the scenes were starting to develop that dark tone toward the end. But something like this can’t really be seen as a fault since the film is just so fluid and wonderful to simply look at.

The Chronicles of Narnia: The Lion, The Witch, and The Wardrobe reminds of Disney’s classic The Lady and the Tramp in the manner that the film is a visual feast for the eyes and ears. I do believe that Disney, even though they didn’t create the series, has a golden ticket in their hand. They just need to be careful how they bring out the six remaining books as it is evident by the Potter series that audiences don’t mind seeing those darker tones. Disney certainly hinted at them in the first of seven, but I hope to see those darker tones established in greater detail in the later films. As a opening act, Narnia arrives in pure style.

The Chronicles of Narnia is presented in a Widescreen Aspect Ratio of 2:35:1 which really showcases the film’s beautiful worlds. While there was some noticeable areas of grain in some of the darker scenes, everything else from the sharp, crisp colors on the creatures to the excellent scope of the huge worlds, looked great. Like most of their big releases, Disney has spent quite a bit of time to give us a perfect image and it really shows here.

We’re given a few different Audio Tracks here in either a English Dolby Digital 5.1 Surround Sound Track or a DTS 5.1 Surround Track. Both tracks really do capture the ferociousness of the imaginary world presented in the film. Dialogue is rather clear from the frontal range while the loud roars and strong overall dynamic feel of the battles were well captured from the rears. The sub also gets quiet a work out from the deep, loud, booming bass. Disney is really becoming a top notch company here in the Video and Audio departments.

Like most recent big Disney releases, Disney has released a bare-bones One-Disc edition and a nice Two-Disc Edition.

The Chronicles of Narnia: The Lion, The Witch, And The Wardrobe is a fine adaptation of the Lewis classic. Boasting fine picture and audio, with great features to back it up, Narnia comes with a huge recommendation for any and all ages, as everyone will find something to like in this film. 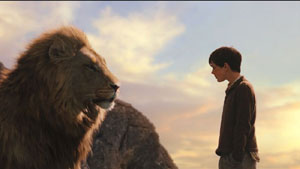 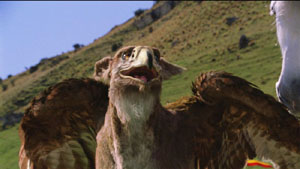 Zu Warriors Squid and the Whale, The