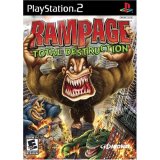 Scene in EB Games/Gamestop: wow, Rampage: Total Destruction for $20; didn’t I play that game when I was a kid at the arcade or on my NES? Yes, yes you did. And for the record it hasn’t changed much. Rampage has made its PS2 return and hundreds (or at least dozens) are anxious for George, Lizzie & Ralph to start punching buildings again. To this game’s credit, they get something pretty decent to fill the bill. In addition, even if the main game doesn’t provide enough umph, the bonus material will certainly take …ou down memory lane.

This marks the first time that a Rampage game has been in “3d”. But it still has a really 2 dimensional feel. There are buildings behind other buildings but movement still feels limited and not fully functional as 3d implies. However, that is not to say this game isn’t pretty. This is the biggest we have ever seen the mutant gang, and everything else looks kinda small. The people are really tiny now and often when there are challenges involving eating people, you can miss one easily. But on the plus side, there is so much going on during a given stage that the game keeps up nicely and you never notice any slowdown.

Probably the weakest part of Rampage, is the sound. If you remember past games, you got basically a lot of punching sounds, and some crashing buildings and that was it. Hate to say it, but they hardly added much else. A lot of tinks, dinks, & booms. We aren’t talking about the booms that shake your stereo system either. The only interesting sounds are the cut scenes or announcements between stages which give the game an arena feel almost. The music feels shallow and develops nothing more for you to stand up and listen to.

For those of you who are either 5 or who have stayed away from Rampage games (until now) because your mommy said it was a big scary monster game, here is a brief rundown of what to do. Basically you take one of 30 monsters (several are available at first, but more can be unlocked during the course of the game), and start punching, kicking and grabbing anything you see. Usually this involves, scaling up the building, punching and kicking parts of it, scaling back down to go to the other side and repeating the procedure until the building starts to fall down. Along the way, you are hindered by people, guns, bombs, and other traps to make you use your life. Fortunately, one of the great things about this series is that there are plenty of health grabs in the form of people (my favorite but watch for the halos), fruit, vegetables, and other power-ups.

Here is where the problems start due to complexity and collision detection. Often it is hard to tell where to scale buildings and once you actually get on them you’ll find yourself shifting from side to side due to the new “3d” interface or falling off the building all together due to mistiming your jumps. Also, for Rampage players of old they snuck in the whole punch vs grab. Yes it is two different functions; and they are different even they look striking similar. There is a kick too, but that one is simple enough to figure out. Other moves exist too, due to upgrades. An upgrade is gained by preforming a task on a certain level like eating 5 bikers or collecting three aces (by punching distinct parts of a building). This can then be used to get the ever useful Jump Smash, Charge Punch, Roar Attack and so forth.

Difficulty starts out with a large learning curve especially if you never played Rampage or it’s been a while since you’ve punched buildings like you just don’t care. However, once you play it, things get a lot easier. And once you get upgrades, levels start progressing quickly. Not to say it doesn’t have its moments and cheap kills, but overall veterans of the game should have no problem with this game. Just watch where you jump, what you eat and what buildings you have your way with (what happens in Rampage, stays in…oh you know the rest).

The Rampage series has made its way into the unlockables arena. The most basic and obvious one is the amount of monsters and that most are locked when you start. 30 monsters in all ranging from the usual cast (George, Lizzie & Ralph) to the bizarre (Eyegore (some eye thing), Shelby (turtle), & Kingstone (king cobra, how I like my malt liquor)). Those are unlocked by playing as a certain group of monsters in a level. Initially you only have one city to play with but as you go on you get more and you can also go back on earlier levels to play with other creatures once you unlock them. The creatures do have differences as well. They have variable attack, run, and jump ratios. A couple like Bart the Bat do have unique jumps as well. This game really excels in the form of two retro games (Rampage & Rampage 2: World Tour) and the great multiplayer. The two retro games really shine and are just as good as you remember them. The multiplayer is a blast and just fun to see how much damage you can dish out to the buildings and to each other. The multiplayer is expanded throughout the King of the City & King of the World Modes.

One of my fondest memories with my dad was playing the whole game of Rampage (original – NES) all the way through (120+ cities) as the movers packed up our belongings to move from North Carolina to Texas. Addicted to videogames? Nahhh. But seriously this game for better or for worse has been released for the Playstation 2 (and Gamecube) console. Its “3d” is shaky at best, however once you get past the okay graphics & sound, the gameplay really shines. Going up and down the buildings is pretty fun as you progress from level to level and messing with the various characters this game has to offer. Even if you get tired of the actual game and the multiplayer, go play the old versions and enjoy simple gameplay at its finest. At $20, it is a fine value, and can provide you with many hours of fun.

Quick note: check out the June 2006 issue of Tips & Tricks for some super helpful information on this game.

Michael Durr has been reviewing movies for the better part of fifteen years now. He primarily enjoys thrillers, sci-fi, animation and even a little courtroom drama. His favorite films include Escape from New York, the Goonies and anything with Alyssa Milano. When he’s not praising Kurt Russell as the greatest actor of our time or scratching his head over a David Lynch flick, he’s spending time at home in Texas with his lovely wife, Lori and his amazing son. How they put up with him is a mystery, but even Basil Rathbone doesn’t have the time to solve that one.
Surrender, Dorothy (2006) In The Mix