Posted in: Disc Reviews by Archive Authors on June 1st, 2006 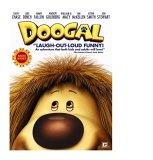 Follow Doogal and friends as they try to save their lush green world from the clutches of the evil jack-in-the-box Zeebad (Jon Stewart) in this CGI family film that completely misses the mark. Though G-Rated – and obviously of inferior intellect – the film tries to be witty and smart with a ton of stale pop culture references its target audience will not come close to grasping. Sure, the adults will get them, but once they do, the question becomes, what do we do with them? Another “Can’t Touch This” MC Hammer referen…e? “Wax-on, wax-off” – Karate Kid anyone? “My name is Neo” – did we need another reference to a trilogy where only one of the films was even remotely worth watching? This tripe is the kind of family fare that makes adults cringe in their boots at the thought of having to sit even 77 torturous minutes with these bloated celebrities trying to be funny under the guise of silly looking animals that aren’t even that cute.

If I had to find a strong point, I would say Judi Dench’s narration is about all the film has going for it. Back to the bad – Kevin Smith’s moose character hardly says anything throughout the course of the film, but he does offer up the number of expected fart jokes with his overenthusiastic gastro-intestinal behavior. While Doogal, the long-haired puppy dog intent on saving his master Florence (Kylie Monogue) from the ice block prison created by Zeebad, is a cute little creation, the child star providing his vocals completely ruins any endearing qualities by the mere movement of his lips. This film is truly abysmal. I can’t imagine anyone liking it for two reasons: 1) It tries to outsmart its target audience. 2) It does so by antiquated pop culture references, which will completely turn off the only demographic it has left to please. Avoid at all costs.

While the film is crap, I must say the visuals are spot-on flawless. It’s a very colorful creation, and it uses the spring-winter contrast to grand effect visually. If a child finds the film entertaining, it will probably be due to the mesmerizing color of the presentation. Zero grain and edge enhancement to accompany the widescreen version of the film, though I’m sure you’ll find traces of it on side A, where the full screen version resides.

Presented in 5.1 audio, Doogal sounds fine, but the film doesn’t offer a whole lot of opportunity to see what the track is really capable of. Dialogue levels are clear with a volume a little north of medium. Bass, however, isn’t nearly as dynamic as one might expect from an action-oriented film so young in age. Even the soundtrack got on my nerves, mainly due to the purposely caterwauling vocals of the talentless Whoopi Goldberg, trying her best to steal the show – unfortunately, her presence further proves this is one “show” not worth “stealing.”

Thankfully, all I had to endure was the 20-minute Making of Doogal featurette and a short theatrical trailer for the film. Most of the highlights, I noticed, from the featurette can also be spotted on the end credits for the film. Make this two perks of Doogal – they do a good job of showing you the voice-over process. Too bad, the film isn’t worth picking up to see it.

I like good family films. I hated Doogal. If there are some children, who can derive enjoyment from it, more power to them. The older they get, the less wholesomeness they’re going to see in their entertainment. But wholesome doesn’t necessarily equal quality. In this film, I offer you Exhibit A. Overall – great video, ho-hum audio, and a selection of bonus materials, which are mercifully short.