Posted in: Disc Reviews by Archive Authors on March 13th, 2007 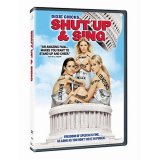 Back in 2003, The Dixie Chicks raised controversy when lead singer Natalie Maines announced – to a concert audience in London and in opposition to the Iraq war – that the Chicks were ashamed the President of the United States is from Texas. Her comment changed their career.

I’m not a country music fan, so I hadn’t heard of the Dixie Chicks until they enraged a significant number of red-blooded Americans, who began boycotting the group and staging demonstrations involving various forms of destroying Dixie Chicks CDs. You’d think these hardcore Americans would be happy to see fellow citizens exercising their right to free speech, but the common sentiment from Bush-lovers was “free speech is fine, but don’t do it in public, and don’t embarrass the President.”

And so goes the title of this feature-length documentary, Shut Up & Sing. The film presents an intimate, insider’s look at the incredibly popular Dixie Chicks as they deal with the aftermath of the anti-Bush comment, and evolve their career for the better. We see the chicks at home with their families, at work in the studio and on stage, and sitting around with their manager discussing their tumultuous career.

The film does a great job showing the emotional impact the protests and death threats had on these three women, and how their anger, sadness and frustration fueled the creation of their double-platinum album, Taking the Long Way.

It’s now hard to imagine such an uproar over criticism of Bush and the Iraq War, since the man and his mission are reviled more and more with each passing month, and talk of impeachment has been swelling up in several areas of their country. But back in 2003, Bush was still pretty darn popular, and the nation was too close to 9/11 to be anything but overly sensitive to military matters. Back then, the Dixie Chicks sticking to their guns was courageous and risky. It still is, but now they seem like visionaries for helping to lead the opposition charge.

So the film is an intimate portrayal of an emotionally explosive situation. How’s the DVD?

Dixie Chicks – Shut Up & Sing is presented on a single disc, in 1.33:1 full screen format. The documentary includes footage from a wide variety of sources, from home videos and media clips to more professional stuff, which makes it difficult to assess the overall quality. I’d say the transfer is good, and the overall presentation ranges from ok to good.

The main menu is animated and scored.

The only audio presentation is English Dolby Digital 2.0. The film is mainly dialogue, and all of it clearly presented, but it would have been nice to have a fuller sound for the Dixie Chicks music, whether in studio or on stage. Still, even with the varying quality of source material, the track won’t have you straining to hear anything.

Subtitles are available in Spanish.

There’s no bonus material. Move along.

Dixie Chicks – Shut Up & Sing is an intimate view of the struggles and triumphs of one of the most popular female bands of all time, and is interesting commentary on the potentially volatile result of mixing politics in the music business. Certainly a must-see for any Dixie Chicks fan.

The Best Years of Our Lives Dare to Play the Game