Posted in: Disc Reviews by Michael Durr on August 6th, 2007 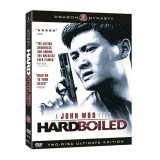 In the United States, we tend to take for granted; influences. In the case of movies, we take certain film styles for granted. We just figure that they always existed. Doesn’t really matter where they came from, we just know we like that style of movie; over and over and over again. Enter Hard Boiled, a 1992 film directed by John Woo. This featured Chow Yun-Fat as Tequila, a hard nosed cop who is on a quest to derail an arms smuggling ring that has both cops and innocent civilians dead in its wake. The movie also featured Tony Leung as Alan, an undercover cop who is in deep cover as a Triad hitman who tries desperately to keep his sanity and protect his true identity. But what set Hard Boiled apart from other films and that was duplicated time and time again was over the top action and no-nonsense gunplay. In the first five minutes alone with the teahouse scene, you see more dead bodies fly across the screen than most action movies deliver in a couple of hours. But it wasn’t just dead bodies, you can rent George Romero Dead movies if you want to see lifeless bodies. It was the style, you had the imagery of three guns emptying from the bottom of a birdcage, Tequila jumping in the air and killing two gangsters with a gun in each hand; and sliding down a staircase with such grace. This would continue in other scenes where similar heroics would come into play. For over two hours, your breath would escape you and somehow return by the final bell.

Hard Boiled was a film that made no apologies and has only amassed popularity as time goes on. The term cult classic would be more of an insult to the film as it has gone beyond that premise. In addition to two fine leading roles, the film included many popular supporting roles; primarily on the villains’ side. Anthony Wong played the devious Johnny Wong, a character that had no morals and whose only real mission was to control the arms smuggling ring of China and get all the money in the process. Phillip Kwok (also known as Cheung Jue-Luh) played the role of Mad Dog (or One-Eye), the action counterpart to Wong’s character as he enforced what Johnny didn’t want to dirty his hands on. These characters developed a chemistry that produced memorable dialog with and without words. This was especially true when it came to the characters of Tequila and Alan once they get on-screen together. It was a flow of actions and reactions that had you enthralled for every last phrase that was used. The film’s only negative would be the scenes where they decide to spend an inordinate amount of time surrounding getting the infants to safety. Once you dive into the extras on Disc Two, you start understanding that the babies actually were to be the main plot point or original concept of the film. So as a result they contributed to a major scene. The movie is still a masterpiece even with that small discordance with its amazing action and a hard running story that lead to be an influence of many future Asian and American action movies.

This film is shot in 1.85:1 anamorphic widescreen. The print has been cleaned up very well and is a testament to the care that Dragon Dynasty took in bringing this flic to an appropriate 2 disc dvd set. The color is impressive and it is hard to find any areas where it doesn’t feel clear and accurate. Blood feels genuine and you gain a whole new respect for the color of white.

I haven’t seen this many audio choices in a dvd set for quite sometime. We get Cantonese DTS 5.1, Cantonese DD 5.1, Cantonese Mono (original mix) & an English Dolby Digital 5.1 Dub. I listened personally to both the DTS and the English Dub. The DTS is fantastic, from the moment Tequila mixes his favorite concoction to the final gunshot in an array of bullets and explosions that simply please an audiophile’s pallet. Surprisingly, the English dub isn’t awful as it does exactly what it should do; save those lazy bastards who don’t want to read while still provided a fairly accurate portrayal of what is going in the film. There are a couple of plot points that are missed in the English dub that you catch with the original language turned on but you should still be able to enjoy the overall premise of the flic. Subtitles are also provided in Spanish, English and English for the Hearing Impaired. The English ones seemed fairly adequate even going to as far as describe a newspaper’s headline in English which helped to drive the point of the scene home.

Audio Commentary by Hong Kong Expert Bey Logan: Bey provides an extremely informative and well paced commentary. Sure its not John Woo or Chow Yun-Fat but Bey shows his immense knowledge and introduces us to the Hard Boiled drinking game (it involves primary color jackets & Anthony Wong; at least it doesn’t involve dead bodies or else you be toasted after the first five minutes) .

A Baptism of Fire: A Featurette with Iconic Director John Woo (38:19): A fairly dry but informative interview with the director himself as he talks about plot points, major stars and the success of the film in both style and fan appreciation.

Interview Gallery: Partner in Crime: An Interview with Producer Terence Chang(24:55); Art Imitates Life: An Interview with Co-Star Philip Chan(15:55) & Mad Dog Bites Again: An Interview with Leading Villain Kwok Choi (25:02): This is a series of three interviews from major contributors to the film. First up is Terence Chang who talks about how the film is more of an action movie than a drama movie and how he was amazed at the popularity when he watched the film in the States and Canada. Philip Chan plays the role of the Superintendent; boss to the characters Tequila and Alan. He talks about how when he was on the police force in real life they always told him to act like a cop and when he was acted how they stereotyped him as a cop character. They also go into his singing career around which a essential plot point was created. The final interview is with the Mad Dog himself Kwok Choi who looks a little worse for wear. He speaks in his native tongue and we are treated to English subtitles. Kwok takes the majority of the time to describe the action sequences and how it was working with John Woo on those parts of the film. This probably becomes the most entertaining interview as Kwok is very loose when talking about his role as the awesome bad guy Mad Dog (which also has a habit of trying to be duplicated style wise in future Asian and American flics).

Hard Boiled Location Guide(8:48): This featurette is hosted by the extremely adorable Kea Wong as she takes us on a tour of the locations in Hong Kong that were used in the film. Pretty good and a lot of fun as she seems genuinely interested and informative about the places shown in the movie.

Trailer Gallery (3:20 / 2:10): This shows the Hong Kong theatrical trailer and US Promotional DVD Trailer. Sue me, I like the US better. Come on, the movie-man is narrating the US one, what’s not to like.

Stranglehold – Video Game Mini-Making Of (3:02): A short featurette that talks about the videogame that is coming to the PS3, XBOX 360 and PC platforms on August 27th of this year. Looks like a fun game, not sure if it will be worth $60 but it should be a wild ride as they really went after the Tequila character and got Chow Yun-Fat to do the voice overs while John Woo directed the title and provided the plot points.

Sometimes here in the states we don’t get adequate dvd releases for foreign films. Heck, it took until last year for Criterion to properly release Seven Samurai, a film that is over fifty years old. One would think that Criterion would want to update it’s releases of Hard Boiled and The Killer for they were released in the early stages of dvd and while good discs; not quite up to par on the standards of today. However, the team @ Dragon Dynasty decided to pick up the reins for Hard Boiled and give it the treatment it deserves in a fantastic two-disc ultimate edition. In fact, I would put the dvd release in the same class as the awesome effort that was done on the Seven Samurai 3-disc release. The movie is a masterpiece full of insane action and a very well written story once you get beyond the pile of dead bodies that litter the floor of every scene. A strong supporting cast and great direction highlight the film. The extras then pour it on as we are treated to two hours of interviews and other tiny tidbits including a very good audio commentary that serve to inform us about every last plot point and authentic location. The disc is about as close as to perfect that we can expect with its only notable exclusions would be the involvement of Chow Yun-Fat and Tony Leung. Outside of that, one can only hope that we eventually get a similar treatment somewhere down the line to The Killer. Until that time, I will be watching the action masterpiece again and again; hoping that Tequila finds a cure for the gun shooting blues (maybe more dead bodies).

Michael Durr has been reviewing movies for the better part of fifteen years now. He primarily enjoys thrillers, sci-fi, animation and even a little courtroom drama. His favorite films include Escape from New York, the Goonies and anything with Alyssa Milano. When he’s not praising Kurt Russell as the greatest actor of our time or scratching his head over a David Lynch flick, he’s spending time at home in Texas with his lovely wife, Lori and his amazing son. How they put up with him is a mystery, but even Basil Rathbone doesn’t have the time to solve that one.
Dynamite Warrior Highly Defined – The World of High Definition