Posted in: Disc Reviews by Archive Authors on November 5th, 2007 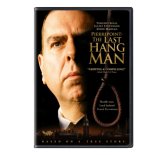 Many people – myself included, looked at Timothy Spall as Wormtail from the Harry Potter films and didn’t think much about it. But the guy has found other work and done well for himself over the years. Recently, he made The Last Hangman, a film based on the life of Albert Pierrepoint, one of England’s chief executioners during the pre and post-war eras.

To sum up Pierrepoint’s accomplishments, for lack of a better word, he executed over 600 convicted criminals during a quarter century period. Most of them were convicted British criminals, however he was responsible for the executions of some Nazi war criminals after the war ended. Spall portrays Pierrepoint as one who took to the job rather well, with a detached efficiency that was praised at many high levels of British government. He was married for a long period of time to Annie (Juliet Stevenson, Bend it Like Beckham), who was increasingly aware of his notoriety as the years went on, and he almost unwillingly served as a lightning rod for the capital punishment debate in London.

Written by Bob Mills and Jeff Pope and directed by Adrian Shergold (The Second Coming), Spall’s portrayal seems to revolve around a typical guy who is more involved with the process than the actual person, and it is somewhat effective, but as the years wear on, he’s become more and more emotionally affected by the people he hangs, including a man named James Corbet (Eddie Marsan, (The Illusionist), who Pierrepoint finds might be someone he knows.

To watch Spall become more and more affected as the years go on is certainly convincing, that’s for sure, but the key scene that gives him a chance to show off is near the end, when he is asking for forgiveness from Annie after all these years. Annie refuses to give it to him, after all the abuse and derision through the years, she has reached her breaking point as well, and he is left lost, wondering what to do with his life. Albert eventually becomes convinced that capital punishment is not the answer, saying at the end on a title card that “I have come to the conclusion that executions solve nothing, and are only an antiquated relic of a primitive desire for revenge which takes the easy way and hands over the responsibility for revenge to other people.” And very few people can speak with the gravitas that Pierrepoint holds in this debate.

Surprisingly, there’s a Dolby Digital 5.1 surround option included on the disc. I say surprisingly because there’s not a lot of action in all five speakers, save for an occasional scene where the score comes into play. But everything sounds fine and focuses on each speaker rather well.

A straightforward 1.85:1 anamorphic widescreen presentation to entertain. The film itself is rather gray in nature and the blacks don’t remain solid for the most part and wavers from time to time. The image holds up well during the feature.

Two extras to speak of, the first being a commentary with Shergold. He discusses the production and explains a lot of the scenes in the film, but without anyone to play off, he sounds low key and very unassuming. He is focused on the production and recalls what was done to accomplish the scenes and relives his good recollections for each part of the film. He has quite a bit of information about the film itself but it isn’t very entertaining or compelling, but if you liked the film then this track will be beneficial. The other extra is a group (or a pair, to be exact) of deleted scenes, one of which is simply extended to the tune of about ten minutes. Both are fairly acceptable cuts.

It’s not necessarily the cheeriest of subjects when it comes to discussion, but The Last Hangman is worth checking out for the topic and for the interesting characters. Spall is definitely playing a change of pace compared to other characters that people know him for, and his performance is compelling and worth investing the time. I wouldn’t recommend owning it unless you’re a fan of Spall or the film, but it’s worth renting at the very least.