Posted in: Disc Reviews by Michael Durr on November 30th, 2007 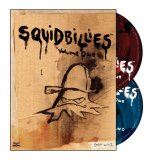 I love some Adult Swim. There are some real standouts shown that have fun plots, edgy animation, and a whole lot of outlandish humor. Venture Bros, Robot Chicken and Aqua Teen Hunger Force immediately come to mind. Heck, I’ve even gave smaller shows like The Boondocks and Metalocalypse a try and liked them on some level. So needless to say, I was interested when I received Squidbillies Volume 1. Twenty episodes staring a Georgia-based hick squid family. How bad could it be?

The story goes something like this. Early Cuyler (voiced by Stuart Daniel Baker) is a backwoods Georgia hick squid (yes, calamari) that has sex with a rather overweight white girl named Krystal. In the process, he robbed a liquor store for cassettes and booze and was caught by the Sheriff. Convicted for 15 years of hard labor, he had no idea that he had got Krystal pregnant. Krystal gave birth to Rusty, a little green squid. Krystal leaves him on Lil’s (Early’s sister) doorstep where the squid spends the next 15 years. At that point, Rusty finds his dad working on the chain gang and the Sheriff takes pity on the two. He decides to release Early which is where this story really begins. The mis-adventures of Early bringing up his illegitimate child Rusty serve as fodder for the rest of the twenty episodes.

Upon first glance of the show, the cartoon is awful. Upon second glance you start chuckling at some of the lines and maybe interested in the story somewhat. But it is still a bloody awful show. As expected, the show takes heavy pride in making fun of the south. No problem there, I live in Texas and being from New York, I make fun of them consistently. I find humor in the Blue Collar comedy troupe, etc. Squidbillies just isn’t very funny. It perfects the ability of taking a joke that is mildly funny the first go-around and makes sure to drive it into the ground at every opportunity. Tasteless trucker hats(okay some of them are funny), how utterly stupid Rusty or Early is or the bizarre sub-plot of the Sheriff’s existence. These are brought up again and again until the viewer is willing to smash their car up against a tree just to get it out of their head.

With 1.33:1, full-screen presentation, Squidbillies has a very odd animation style. The backgrounds have the look of a 8 year old youngster going crazy with some crayons. The actual characters are animated better but it just has a weird feel that doesn’t feel very professional at all. I’m not looking for cutting-edge animation; but I would like it to resemble more than chicken scratch.
Audio

Audio was a little better and was in a very typical 2.0 Dolby Digital Sound. Let me throw one compliment their way, the southern voices sound extremely rich and distinct. The voices are top-notch and what level the show succeeds would be nothing without the voice casting for this show. The music is pretty good and it makes for an entertaining listen even if the jokes are a little flat. Subtitles are also provided for english, french and spanish.

Another one of those show where you want to like it. Really, I want to like the Squidbillies. But I can’t. The southern humor doesn’t bother me one bit and the voice casting actually is very strong. But the humor is the same joke episode after episode. It’s not even a very funny joke at that. For fans of the show however, the dvd package is a very good one. The extras are quite grand and will be a fun time from the commentaries to the shorts to behind the scenes footage of your favorites. I just can’t get behind the cartoon no matter how hard I try. Early and crew are one-trick ponies. Despite the hardship that the show has went through to get on the air, there are sometimes good reasons why that hardship existed in the first place. Try to catch it on Cartoon Network first before you purchase the dvd set.
Episodes

Michael Durr has been reviewing movies for the better part of fifteen years now. He primarily enjoys thrillers, sci-fi, animation and even a little courtroom drama. His favorite films include Escape from New York, the Goonies and anything with Alyssa Milano. When he’s not praising Kurt Russell as the greatest actor of our time or scratching his head over a David Lynch flick, he’s spending time at home in Texas with his lovely wife, Lori and his amazing son. How they put up with him is a mystery, but even Basil Rathbone doesn’t have the time to solve that one.
BUYERS BEWARE! This cheap LCD toy projector really can be that bad. Now THIS Is Specialized