Posted in: Disc Reviews by Michael Durr on December 30th, 2008

The series known as Duckman can be explained in one phrase. Guilty pleasure. The series ran on USA during the 90’s before they decided to re-brand themselves as something more serious. Though for some reason they still tend to show the dog show every year. Anyhow, as I remember it came on right before another guilty pleasure of mine from the 90’s, Rhonda Shear and Up All Night. I miss Rhonda deeply, plastic never looked so good. Heck Tupperware was jealous. Duckman was a series like no other; full of debauchery and indecency just like Grandma intended. Grandpa will never be the same. Paramount has brought us forty-eight episodes over seven discs to compose season 3 & season 4. One has to wonder if it will hold up after all of these years.

(*BTW, this review is written in inspiration to Duckman, so if you are easily offended by suggestive commentary and terrible jokes at the expense of others, then perhaps you might want to skip to a recent review of Petticoat Junction. However, if you read my weekly gaming column and are actually entertained enough to read my reviews, then you will be right at home. Enjoy!)

At home, it is more of the same. He is the father of three children. There is Ajax, his eldest son who consistently refers to his father as “dod”. There are also the twins: Charles and Mambo who are rather unique since they are also Siamese. Then there is Bernice, Duckman’s sister-in-law. Bernice is obsessed about fitness and hating Duckman. His wife Beatrice (to whom Bernice is identical to) is no longer with us or so it would seem.

There are other characters that round out the series. There is Fluffy and Uranus who are secretaries for Duckman’s PI business. They also look like Carebears. King Chicken is Duckman’s arch enemy who must end every fiendish plot with “Mwah ha haa, bawk bawk bawk!” But one thing set this show apart was the appalling use of celebrities as extras. King Chicken was voiced by Tim Curry. John Astin voiced the role of Terry Duke Tetzloff. Ben Stein voiced the role of Dr…Ben Stein. Cameos also included Ice T, Gilbert Gottfried and Judy Tenuta among others.

Somewhere in a mere twenty two minutes, Duckman composes more sick and dirty jokes than your Uncle who was taken away by the police when you were eight for indecent exposure. But like your Uncle, it feels like home. Sarcastic, down-trodden humor that makes you laugh even though you might hate yourself for doing so. Its topical humor remains relevant today even when other shows have lost their flair. I venture to say it has even improved with age as so few cartoon shows actually do. This show also featured Jason Alexander before he became so famous for being in Seinfeld. The only real weakpoint of the show was the tendency to make the show more into a family sitcom instead of about Duckman and Cornfed and their public investigator cases. The best jokes are easily when Duckman is on the case and trying to smooze some client into hiring him. The very first episode in the set, Noir Gang is a great example.

Video
The film is presented in 1.33:1 fullscreen. It’s a mid 90’s cartoon show and still looks like a cartoon show from that time period. Color is decent and as long as you don’t mind a slightly different animation style, you should be good here. Paramount hasn’t done much restore work here, but doesn’t need to either.

Audio
The audio is provided in 2.0 English Dolby Digital. I would appreciate a surround mix for the Duckman’s ranting and raving, I understand no such thing is actually available. So it’s adequate and dialog is clear. The action doesn’t get crazy or anything but we get what we need to enjoy the episode.

Final Thoughts
Many people who think the metric system is kinda neato probably won’t like Duckman. I mean after all Duckman thinks that 5000 hours of community service is like 45 minutes in metrics. But somewhere in the show’s tight twenty two minutes there is enough comedy to fill up a blow up doll with enough air to play strip poker with for an entire night. This dvd set is composed of 48 episodes, most of which are in order. The only one missing is Episode 42. I think that’s more of a rip-off than those talk to a nympho in prison hotlines that double charge you on your phone bill when they know you can’t do a thing about it ‘cause you can’t tell anyone you called them in the first place. So I heard. But seriously, outside of a few episode numbering schemes and replaced music, this set is awesome. The video and audio is decent considering the source and the comedy is relevant even today. I recommend this set quite easily but after watching this many episodes, I must take a long-deserved vacation. Now where is my bathing suit with the padded bulge? Oh that’s right; it is next to my foam rubber pectoral enhancer. Enjoy.

Disc Four (40, 45-50)
Damnit, Hollywood
Coolio Runnings
Aged Heat 2: Women in Heat
All About Elliott
From Brad to Worse
Bonfire of the Panties
Role with It

Disc Seven (65-71)
Short, Plush and Deadly
How to Suck in Business Without Really Trying
You’ve Come a Wrong Way, Baby
Hamlet 2: This Time It’s Personal
Das Sub
Where no Duckman Has Gone Before
Four Weddings Inconceivable 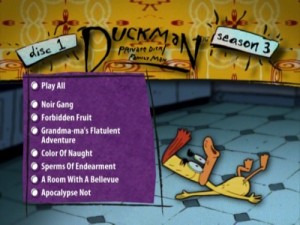 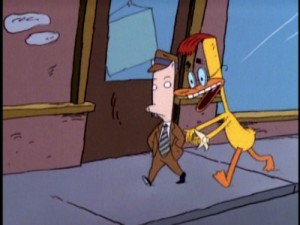 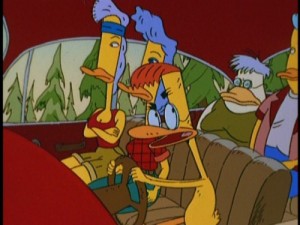 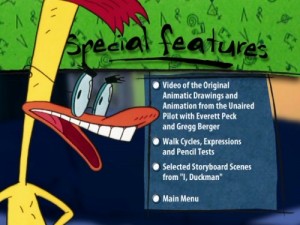 Michael Durr has been reviewing movies for the better part of fifteen years now. He primarily enjoys thrillers, sci-fi, animation and even a little courtroom drama. His favorite films include Escape from New York, the Goonies and anything with Alyssa Milano. When he’s not praising Kurt Russell as the greatest actor of our time or scratching his head over a David Lynch flick, he’s spending time at home in Texas with his lovely wife, Lori and his amazing son. How they put up with him is a mystery, but even Basil Rathbone doesn’t have the time to solve that one.
Ghost Town Eagle Eye