Revenge of the Boarding School Dropouts

Risk taking has never been my specialty. I tend to keep things pretty conservative and never really tried anything out of the ordinary, at least nothing I would consider dangerous. However, I have been interested by many forms of extreme sports. There is skateboarding, motocross, and of course, snowboarding. This beautiful sport combines flawless riders and picturesque snowy landscapes. So how would I take to a movie that tries to make a comedy out of snowboarding? Hopefully well. But then I saw that it included Tom Green and one of the guys from Jackass. This is not off to a good start.

Max (played by Dave England) and Eddy (played by Jason Bothe) are in charge of Team Shred. Team Shred consists of Chris, Tracy & Juice (played by Carlo Marks, Amber Borycki, & Alain Chanoine respectively). Chris is the breakout star of the team while Tracy & Juice are up and coming. However, Max and Eddy only focus on their breakout star as they arrange parties, videos and other events for Chris and only include the other two as a mere afterthought.

After the group does a lot of drinking, drugs and shredding, things start to take their toll. Chris finds a love interest in Lisa (played by Lindsay Maxwell), who is Public Relations for a snowboarding company. Meanwhile, Kingsley (played by Tom Green) is trying to recruit members to his new snowboarding team and has targeted Chris as his primary interest. Can Max & Eddy make sure that their top star stays interested in the team and can they keep their rising stars Tracy & Juice from jumping ship as well?

This movie is actually a sequel which you only figure out from watching the digital copy of Shred or checking out the Internet (which provides hardly any information either). Shred was actually an okay story of Max and Eddy finding a team of snowboarders and training them to be the very best. Max is actually portrayed as a former snowboarder pro who has simply gotten too old for the sport. Shred II or rather Revenge of the Boarding School Dropouts is an absolute mess from start to finish.

You are a pervert! That’s what the audience is probably thinking at this point. I’m looking for skin and plenty of it. I’m only going along with the advertising. When your cover has a woman in a bikini as the primary focus with a smaller picture of two nearly naked women holding each other on the back, I expect something. Instead, I get a bait and switch. Furthermore, where the heck is Tom Green in this movie? He shows up for 3 or 4 scenes and all of them are him walking outside right beside the lodge and having a conversation. It’s so bloody obvious that he only came for one day of shooting (possibly half a day) and that the movie does nothing to cover up for that fact. He was the focus of the first movie and this movie depended more on Dave England which can be expressed in one phrase for his ability to bring the funny: “Epic Fail, Dude!”.

The dvd is presented in 1.78:1 Anamorphic Widescreen. The picturesque landscapes of Canada is something beautiful to hold. However, the shooting for this dvd is average at best. Often, pixilation will occur and the color isn’t as great as what you would hope. Many scenes also jut out instead of fading to black or slowly going into another scene. It creates quite the jarring effect making it hard to watch. The quality was simply not there.

The film is recorded in 5.1 & 2.0 English Dolby Digital. It really doesn’t matter which track you pick, it’s not going to wow you with any special effects in the audio department. Dialog is clear for the most part but the volume isn’t very loud. There aren’t any magical ski effects or ambience as one would expect from the surrounds. Again, very average work. Subtitles are also included in Spanish.

Slapstick comedies can be fun and even sequels about Slapstick comedies can be fun (Airplane 2, Bachelor Party 2 are good examples). But when a movie starts out as a mess, the sequel can’t be too far behind. Reducing the screentime of the only person most people saw the first one for doesn’t do them any favors either. This movie is pretending to be funny, sexy and about snowboarding and barely succeeds on one of those. Awww, the heck with it, it isn’t a good snowboarding movie either. Do yourself a favor, go get a disc of Jackass and then throw fake snow on top of it. That will give you the same effect as watching Revenge of the Boarding School Dropouts. Instead, it will cost you about $2 ($1 for a used copy of Jackass and $1 for the fake snow) and save you a lot of time. Not recommended. 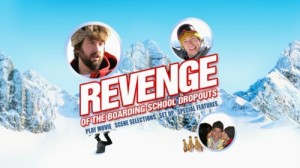 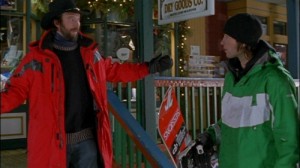 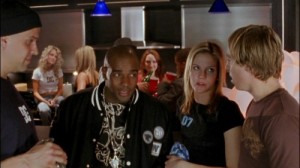 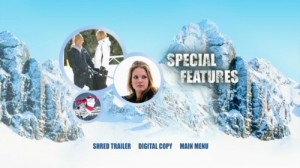 Michael Durr has been reviewing movies for the better part of fifteen years now. He primarily enjoys thrillers, sci-fi, animation and even a little courtroom drama. His favorite films include Escape from New York, the Goonies and anything with Alyssa Milano. When he’s not praising Kurt Russell as the greatest actor of our time or scratching his head over a David Lynch flick, he’s spending time at home in Texas with his lovely wife, Lori and his amazing son. How they put up with him is a mystery, but even Basil Rathbone doesn’t have the time to solve that one.
El Chicano – In The Eye of the Storm Fling