British comedy for me has always been big hit or big miss for me. There really is no between. Monty Python & The Holy Grail – big hit. This movie makes me laugh from the first second until the closing credits. But some of the Monty Python sketches or all of Meaning of Life – big miss. Same thing with television, the Black Adder is simply awesome. Absolutely Fabulous? I never got it and found it completely droll. So I was eager to see Gavin & Stacey and find another wonderful British hit. I was totally pleased.

Gavin (played by Mathew Horne) and Stacey (played by Joanna Page) quite like each other. There is one problem though, they haven’t really met each other in person. They have a budding phone romance and have decided that they finally need to meet. Each of them takes a bud along. Gavin takes Smithy (played by James Corden), a large friendly guy who loves beer and food. Stacey takes along Nessa (played by Ruth Jones), a large not so friendly girl who loves beer, food and apparently tattoos.

So, Gavin and Stacey meet and sparks fly. It is the real life romance they hoped it would be and it continues with a little night club action and even some hotel “wink wink, nudge nudge” They announce to each other that they are in love by the end of the very first episode. However, they also have to figure out how to coordinate their relationship with each other and their families.

Gavin and Stacey both still live at home. Gavin lives with his mum, Pam (played by Alison Steadman) and his pop, Mick (played by Larry Lamb). Stacey lives with her mum, Gwen (played by Melanie Waters). Her uncle, Bryn (played by Rob Brydon) lives across the street. Can this romance last and can everybody play nice with each other as they attempt to get along?

British television shows often try to get their humor from being British (you know the funny voice that pronounces English words correctly) rather than real humor. Gavin & Stacey thankfully buck this trend and just give us side-splitting humor. The pace is great and the actors are wonderful. In addition, Gavin & Stacey really fit together. They have chemistry from the very first meeting and seem like they have been in love well before this television show was even produced.

The other characters in the show do a great job in providing those humorous moments I spoke of. Nessa & Smithy contribute the gut (no pun intended) of the humor and many of the side-splitting moments. Gavin’s parents Pam and Mick also provide some great banter back and forth. My only complaint with the show is how quick everything goes. By the end of the first episode as mentioned, they announce their love for each other. By the end of the second episode? Well, without giving too much away, let’s just say they go quite a bit further. The show wastes no time and I just wish they would have slowed things down a bit and let the lovers bask in the glow of a new romance a bit.

The video is shot in 1.78:1 anamorphic widescreen. The video is absolutely fantastic. I thought this kinda clarity was only available in Blu-Ray. The colors are solid and the characters all look great on screen. Of course, it probably only helps that Joanna Page has to be one of the most adorable women I have ever seen. Seriously, could she get any cuter? That aside, the only negatives I saw was an occasional halo or two. I’m picking at straws seriously.

As positive as the video is, I was expecting the sound to be better. It’s unfortunately on in Dolby Digital 2.0 English. English subtitles are included but the audio for dialog is pretty decent, I didn’t miss too many words through the accents. But it’s not that exciting either. In addition, the music numbers are often way too loud, so you have to turn that down. Then the dialog becomes too soft and you have to turn that back up. All in all, it’s very average audio.

Gavin & Stacey has been on for 2 seasons (called ‘Series’ in British television circles) and a Christmas Special. That’s thirteen episodes and they only plan to do one more season. That’s kinda puzzling when they have won quite a few British television awards and have a fantastic comedy. You would think it would go on for longer than that. Perhaps it is a little bit of burnout or just fresh out of ideas. They did move the show pretty fast. However, the fantastic set of characters as well as a well-produced dvd disc make for a much recommended 166 minutes of fun. Go get it, you bloody wanker. 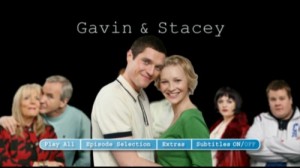 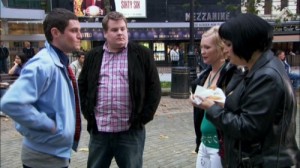 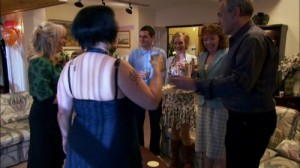 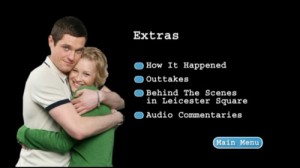 Michael Durr has been reviewing movies for the better part of fifteen years now. He primarily enjoys thrillers, sci-fi, animation and even a little courtroom drama. His favorite films include Escape from New York, the Goonies and anything with Alyssa Milano. When he’s not praising Kurt Russell as the greatest actor of our time or scratching his head over a David Lynch flick, he’s spending time at home in Texas with his lovely wife, Lori and his amazing son. How they put up with him is a mystery, but even Basil Rathbone doesn’t have the time to solve that one.
Taking Chance The Best of Star Trek: The Original Series