Posted in: Game Reviews by Michael Durr on August 1st, 2009

To say I’m not a country music fan is a bit of an overstatement. I’m not even sure what exactly possessed me to go to NewEgg.com and order a copy of Rock Band Country Track Pack. Oh yes, now I remember it was my fiancée and future wife, Sarah who thought I should be a little more diversified in my music. Apparently, 80’s hair rock was only popular in the late 80’s. I must have missed the memo. But surely, I have heard this thing called country before. I mean I attended more karaoke clubs in Texas during the mid to late 90’s than I care to think about. Once they were done throwing tomatoes at me after I finished my rendition of “Here I Go Again” by Whitesnake, they usually threw on an old Garth Brooks or Clint Black tune.

The graphics are the same here as any other Rock Band game. My thinking is that they make the graphics look so generic that they almost want you to export them into your Rock Band or Rock Band 2 setup so you can actually customize things like your character. The “cowboy” graphics you see on the back of the cover are nowhere to be found in the actual track pack unless they come up in some random generator. Your best bet is to import this into Rock Band and then pick your attire accordingly. There isn’t even any country and western intro video or anything besides a static title screen.

The sound is reproduced in 5.1 Dolby Digital sound and regular PCM sound if you don’t want to enable it (I’ve found on some setups the 5.1 in RB creates an echo on vocals at times). From what I can tell, these are all master recordings. There are exceptions such as Willie Nelson – On the Road Again which is a live cut. But these are not the norm. The sound is excellent, if you are familiar with the music, you are going to love playing your instruments to these tunes. The surrounds fill out well, just as any good composed Rock Band track. No problems here.

Rather than sit and explain game mechanics, I’m going to assume that this isn’t your first trip to the rodeo known as Rock Band. In those odd and very rare cases, I invite you to pick up Rock Band 1 or 2 and spend some time with the in-depth tutorials. The actual music included is more important to explain, trying to analyze the choices and see if this is a good value for your buck (no, not that deer head on your wall, the paper you find in your wallet, usually scarce after a weekend with the “boys”).

The first thing that stands out about this setlist is that it isn’t all recycled tracks from the Music Store in Rock Band. Instead, there is some new material that won’t be available for a little while to Rock Band 2 enthusiasts. In fact, roughly half of the songs are new. In past packs, this hasn’t happened at all and thus should generate more sales than usual. The songs are also mostly newer tunes from this decade while only a handful are considered 90’s and only two songs for the 70’s-80’s. To some of the more traditional country folk looking for Conway Twitty and Dolly Parton, they are nowhere to be found.

So what is found? Well, you get some predictable artists such as Alan Jackson, Brad Paisley, Brooks & Dunn, Dixie Chicks, Martina McBride, and Shania Twain. There is some lesser known stuff from Drive-By Truckers, Miranda Lambert or Cross Canadian Ragweed. Then there are a couple of classic stand-bys including “The Gambler” by Kenny Rogers and “On the Road Again” by Willie Nelson (which for some reason I think should be renamed “On The Reefer Again”, but that’s another story). It’s honestly a very good mix of songs.

Okay, so we got songs by popular artists. But are they the right song? Yes and no. Many will instantly recognize “She Thinks My Tractor’s Sexy” by Kenny Chesney or “Sin Wagon” by the Dixie Chicks, but then some just don’t make sense. “Swing” by Trace Adkins is the first one that comes to mind. “Honky Tonk Badonkadonk” is a very popular cross over country hit for Trace and would have led a lot of credibility to the pack. “Swing” isn’t that great of a song either and while I like songs about baseball as much as anybody, if I have to sing Swing Batter Swing one more time, I’m going to take a baseball bat to my Xbox. There are other questionable songs, Miranda Lambert’s “Gunpowder and Lead” was a top ten hit for the vocalist but “Kerosene” might be more recognizable.

The same argument could be done for Martina McBride with the included tune “This One’s for the Girls” versus her more popular tune of “Independence Day” but that’s probably splitting hairs more than anything. Finally, my least favorite choice had to be the Rascal Flatts tune of “Me and My Gang” when “Bless the Broken Road” was probably their highest charting tune and “Life is a Highway” is a decent cover of the mega popular Tom Cochrane hit. Actually, I would just like a complete track pack to feature only songs by Tom Cochrane and his band Red Rider, but I digress.

The difficulty is what you would expect. It’s country, sure there are slow songs but one of the marks of country is that the guitar is fast and you got to have a fiddle in the band too. So don’t expect to be slouching too much as many of these songs move faster than I can type. This description can also be used for the drums. When it comes to vocals, girls better have their singing shoes on. There is also a personal warning I have for the guys in the room. If you are used to singing rock n roll (especially those tunes where the lead guy screams or wails), you will have a rough time singing the very deep melodies of a typical male country & western singer.

This probably sounds like a broken record, but if you know the songs you’ll have a great time with the tunes and it will add some considerable mileage to your Rock Band playlist. All of these tunes can benefit from a full band but might work out better if you remove the vocalist from your proceedings unless you have a very talented lyricist. For the single player, simply pick your poison and get going on the several tiers of the career mode (which understandably is very short).

There are specialized achievements for this package since it is possible to play this without owning Rock Band 1 or 2. There are 12 achievements and they are worth 250 points. These start out pretty easy like Star Studs which has you gaining 75 stars across all songs. With 21 songs, this only requires an average of 3 ½ stars a piece. But for every one of those, there are some very challenging tasks such as getting thru expert vocals for Suds in the Bucket for Smooth Talkin’ Son of a Gun or Completing any Solo Tour on expert for Crazy Mothertrucker.

So Rockband has gone country. It has achieved this with twenty one songs and half of which have never been seen to Rock Band eyes. Some people will blast this pack and say “It’s not Rock, blah blah blah”. Yeah, I could easily be in that group too but I recognize diversity and have no problem with country tunes being part of the proceedings. However, this track pack is best served for one thing, using the download code (why isn’t this ripped from the disc instead of waiting on a slow connection from the Internet?) and transferring this to your Rock Band 1 or 2 play list.

Sure, there are 12 achievements and 250 points but unless you are a hardcore music gamer, you just want to play the songs. Do yourself a favor (unless you buy this one used), use the code, go get yourself drunk and go check on your mama who probably got run over by a train and then delete the game from your profile (you don’t want to ruin your completion percentage). Then load up Rock Band, spend some money to outfit your dude or dudette and have a good country time. As ole Kenny used to say “Now every gambler knows that the secret to surviving is knowin’ what to throw away and knowing what to keep”. Keep the tunes, and ditch the disc. Recommended for anybody with an open mind to music. 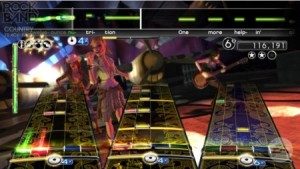 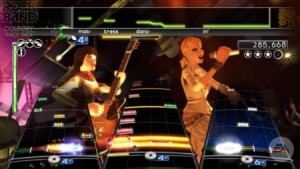 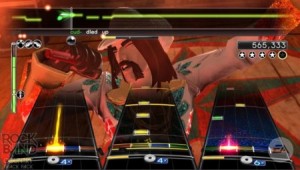 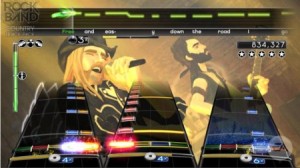 Michael Durr has been reviewing movies for the better part of fifteen years now. He primarily enjoys thrillers, sci-fi, animation and even a little courtroom drama. His favorite films include Escape from New York, the Goonies and anything with Alyssa Milano. When he’s not praising Kurt Russell as the greatest actor of our time or scratching his head over a David Lynch flick, he’s spending time at home in Texas with his lovely wife, Lori and his amazing son. How they put up with him is a mystery, but even Basil Rathbone doesn’t have the time to solve that one.
Messengers 2: The Scarecrow The Middleman