Posted in: Disc Reviews by Archive Authors on October 15th, 2009 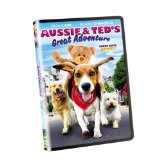 In a film where humans play minor characters, Aussie & Ted’s Great Adventure is about Aussie, a loveable dog, embarking on a journey to return his young owner’s stuffed animal back to her.

The story begins on the eve of what is the kid’s last day of school before winter break. Because of the fact that both Laney (Alyssa Shafer) and Eric (Leo Howard) received such high grades on their report cards, their parents (played by Dean Cain and Beverly D’Angelo) decided that they should each receive one gift before Christmas, with Eric’s gift being a replica of a small dragon and Laney’s gift being a magical bear named Ted.

Soon after being brought into the house, Ted creates a problem for Aussie when Laney opts to spend all of her time with the stuffed animal instead of with her always faithful pet. Feeling rejected, Aussie takes it upon himself to hide the bear from everyone including Laney; which leads to the bear being stolen from him by another neighborhood dog and then being put into the hands of several different kids—all of whom are wishing to keep the lovable bear as their own.

Even though I am currently a senior in college and in my mid-twenties, even I couldn’t help but walk away from this movie feeling as if I had learned something. If a dog and teddy bear can put their differences aside and form an unlikely bond with one another, then why can’t the rest of the world at least try and find something in common with those around them that are different from them. This is just a thought.

The 89 minute movie has a 1.78 Anamorphic Widescreen aspect ratio. I didn’t really notice any problems with the video except for in the beginning before the title was shown. It looked as if the first couple of minutes had been shot using a home-video camera. Other than that, there were no problems to be seen.

With a 5.1 surround sound, Aussie & Ted’s Great Adventure holds a basic sound system. There is no problem with dialog clarity, and there isn’t any problem with distinguishing who is saying what.

Although the movie left me in deep thought, I can’t help but think to myself that this was a pretty predictable film (dog loses bear, dog finds bear, dog loses family, dog reunites with family) and I’m not surprised it was a straight to video release. I think if a buyer had small children, this would be a movie they’d want to watch with their kids just to teach them about love and friendship, but besides that, I really don’t have much to say about the film.