Posted in: Disc Reviews by Michael Durr on October 19th, 2009

Cheesy horror-fests can often be cringe worthy. Take a couple of actors, have a few supporting ones that die and put them in a plot where either they face some giant disgusting creature, a ridiculous serial killer or a lot of little pests. The heroes no matter how bumbling they might be somehow come out with the victory and the rest is cinema magic. We received one such movie with the title: Infestation. Maybe this would be the one that is a little better than the rest?

Cooper (played by Chris Marquette) is a slacker. He goes through life just making from one day to the next. He works at a local call center where he is always late and in the middle of obnoxious games. Today, he is late as usual and tries to make it seem like he is working to no avail. It just so happens he is called into his bosses’ office. As the boss, Maureen (played by Deborah Geffner) looks like she is about to fire the young employee, a loud screeching sound is made. People cover their ears and everything goes to black.

The next time Cooper wakes up, he realizes he is in a cocoon made of some sort of webbing. There are also bugs scuttling about. It’s not before long he comes face to face with one of the larger creepy crawlies and has to do battle. Cooper survives. He goes to the other cocoons in the building and starts to wake some of the other people and get them out of their webbing. People like Hugo and his father, Albert (played by E. Quincy Sloan & Wesley Thompson) and also their boss Maureen.

Once the boss is awoken, she realizes that her daughter, Sara (played by Brooke Nevin) is still in the parking lot waiting for her and goes off to get her. The others try to stop her but once she gets within spitting distance of the car, she is taken away by a giant flying insect. The others tear apart the cocoon of Sara and she officially joins the band of members. The group spends a night in the call center (complete with a little hysteria) before heading out to seek others who might have survived.

Part of the group stays behind and part with Cooper & Sara “acting” as leaders decide to hit a few places looking for people and food. Also joining the on-screen group is Cindy (played by Kinsey Packard) who does a good job of just seeming lost but pretty on camera. One of the spots that the group decides to hit is Ethan’s house (Cooper’s father) (played by Ray Wise). Can the group make it in time to see his father and save the world from the largest bugs in the world that weren’t born in Texas? We’ll have to find out.

Maybe I was hoping for something akin to Shaun of the Dead. Actually, I think I was just hoping for a credible movie that had some laughs. I’m still waiting on that promise. There are a couple of bright parts and that comes from the performances of Brooke Nevin and Ray Wise who both prove that they belonged in slightly bigger roles on more than shoestring budgets. Wesley Thompson also did a decent job and turned into one of the most likeable characters.

But what did I get from most of the other actors? A lot of clumsiness and just forgettable acting. Chris Marquette’s character is a slacker, that part he plays to a tee. However, he never grows throughout the film. Chances are as the movie closes, we are pretty sure that his character will be moving from job to job without a clue. The story’s direction leaves a lot of gaping holes as well and keeps us wondering if this little clique would be better off if they were eaten by giant black bugs.

The film is presented in 1.78:1 Anamorphic Widescreen. The film is fairly serviceable in the video department and everything looks okay on the screen. Heck, even the bugs don’t look too fake but for the most part they still look like much larger versions of those you buy in the Halloween clearance barrel for 99 cents. There is some grain here, but honestly it’s fine.

The audio is provided in 5.1 English Dolby Digital (Stereo mix also included). It actually sounds good. Despite the movie having issues, audio is the movie’s strongest part. Surround is used and quite well for dialog and certain action sequences. It’s not going to be an awesome presentation, but it does add to the film and at some good crunch parts. Dialog is clear and I didn’t have any problems understanding the bugs (who I think were saying “Get me out of here and into a better production like Starship Troopers 3”). Subtitles are also provided for English SDH.

It probably seems like I’m cutting on Infestation a little bit. Okay, apparently I’m losing my sarcastic wit if it only seems like a little bit. The truth is that I like some big bugs films (hey the first Starship Troopers was fantastic) and I was hoping for something here. It has an attractive Brooke Nevin and a smarmy Ray Wise. But the whole production is just lacking…close to everywhere and when the finish comes, neither you nor the bugs are going to be happy about it. The disc is certainly satisfactory and it’s a decent commentary for the director too. Too bad, there isn’t much to feel happy about (perhaps the 20 second topless scene of Kinsey Packard is a small happy point) and I can’t recommend this to anybody unless they like frustrating movie magic. 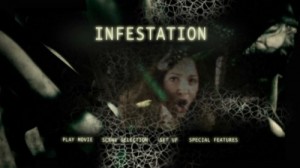 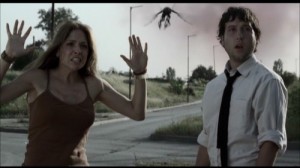 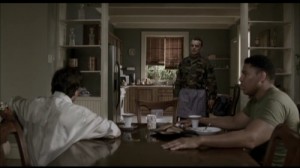 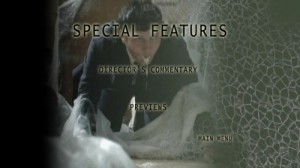 Michael Durr has been reviewing movies for the better part of fifteen years now. He primarily enjoys thrillers, sci-fi, animation and even a little courtroom drama. His favorite films include Escape from New York, the Goonies and anything with Alyssa Milano. When he’s not praising Kurt Russell as the greatest actor of our time or scratching his head over a David Lynch flick, he’s spending time at home in Texas with his lovely wife, Lori and his amazing son. How they put up with him is a mystery, but even Basil Rathbone doesn’t have the time to solve that one.
“31 Nights of Terror” Hardware The L Word: Final Season