Posted in: Disc Reviews by Michael Durr on November 27th, 2009

Superman: The Animated Series was made in the same fashion as Batman: The Animated Series. The tone was a little more serious and a lot more action. It was first produced in 1996 and made 54 episodes through the year 2000. The show received high praise for raising the bar but at the same time keeping what was important to the mythos of Superman. In fact, it even received a nomination for an Emmy. Besides Smallville, this probably stands out as the best television adaption of the one known as Superman, the Last Son of Krypton and hero to the planet Earth (and beyond).

Most of us know the story of Superman, but perhaps it is best that we run it over a little bit adapted to the actual animated series. Krypton is approaching devastation but only one scientist believes it to be true, Jor-El. He feeds his information to a computer named Brainiac who is in charge of the planet and all of its major operations. The computer analyzes the information and says the planet is safe. Jor-El knows the computer is lying and can’t convince the others of the danger.

Jor-El decides to break into the holding place of Brainiac and see for himself what is the real truth. He finds out that Krypton is indeed dieing and there is nothing he can do about it. With the cops in pursuit, he runs to his home and with his wife’s help they put their son Kal-El in a spaceship. They set the course for a planet called Earth. As the spaceship flies away, we see two things: the destruction of the planet Krypton and Brainiac escaping.

The scene shifts to the planet Earth where the spaceship crashes. Martha and Jonathon Kent find the spaceship and the adopt the baby as its own. They name him Clark. The next few minutes, we saw Clark grow up. But Clark realizes he is different from the other human beings. He has amazing powers and he uses them to save others. Eventually the Kents tell Clark about the spaceship and he learns where he came from.

Eventually Clark accepts his powers (and also learns to fly) and takes a job at a local newspaper office as a reporter along with Perry White & Lois Lane. Clark keeps his powers secret as Lois and him investigate Lex Luthor who is showing off his new battle suit robot. The robot gets stolen but its up to Clark to change into his suit and take out the bad guys. He succeeds and pictures are taken. From that point on, he is dubbed Superman. As the show continues and he comes to understand his powers, he battles many more villains and keeps the world safe for at least one more day.

To be honest, I never watched this series all that much. I was a Batman boy and spent most of my time between that and the X-Men animated series. I never got around to Superman as he always seemed too powerful and too much of a goody goody image. I should have. These fifty four episodes are some of the most wonderful pieces of super hero cartoons I have ever laid my hands on. Superman is still shown in a goody two-shoes kind of light but it’s more edgy and less apple pie.

The stories are excellent and the range of characters will make any fan-boy squeal in delight. I absolutely adored Lobo (Brad Garrett is awesome in portraying his voice) and new villain: LiveWire. Lobo needs his own animated series so bad, it isn’t funny. But even if you took out those two characters, there is still a good dozen or more that I could still rave on about for the next couple of paragraphs.

Through the course of fifty four episodes, there are naturally a few shows that you could describe as somewhat troublesome (examples like Unity & Superman’s Pal). In fact, anything involving the Toy Man wasn’t my cup of tea. He seemed much more suited for Batman. But most of episodes were at the end of the run when they needed some filler before the final uplifting episodes. But honestly, the complaints on the show are few and far between.

The video is shown in its original 1.33:1 fullscreen presentation. The color is about what you expect for mid-nineties animation and basically about as good as the Batman animated series was. There was apparently a lot of work done in the editing room and most of it stands out wonderfully. Everything is pretty sharp and you’ll get to see plenty of Superman close up and personal. Even far away shots are above average for the most part.

Audio is presented in English and French 2.0 Dolby Stereo Surround. There is also a Spanish option but it only appears for the first couple of discs. Sound is strong and about as full as a 2.0 mix can get. Dialog is clear and the audio presentation feels very solid. An important note, subtitles are also a little confusing. Spanish and French are provided on all episodes while English only appears in discs one through four.

Disc Four – Side A

Disc Four – Side B

Disc Six – Side A

Disc Six – Side B

I do feel my duty is to mention the packaging as some people will hate it and some people will live with it. Each volume of 18 episodes gets one disc with full color cover art with roughly six episodes and then a normal two-sided disc with six episodes on each side. So that represents the first six discs and then there is a seventh disc which includes the special Darkseid featurette.

These seven discs are placed into one very complicated case holder and thrown into a very nice slip box with collectible packaging. It does sit nicely in your collection but one has to wonder about the condition of the two-sided discs after a year or two of usage. I can certainly understand why some fans are not pleased but a ten-disc collection might have been hard for executives to swallow.

There are plenty of things in my life that I have only come to appreciate many years later. John Carpenter movies, Charles Dickens, and a gamer fiancée are among a few. I can safely add Superman: The Animated Series to the mix. It’s blend of great storytelling with solid animation and fantastic characters made this a complete joy to watch. Some will find the packaging troublesome but with the wealth of special features and all fifty four episodes, it is really hard to discount this one. If you only decide to watch one version of the man who is able to leap tall buildings in a single bound, this would be a fine choice. Highly recommended.

Disc Four – Side A

Disc Four – Side B

Disc Six – Side A

Disc Six – Side B 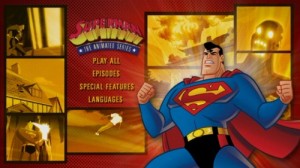 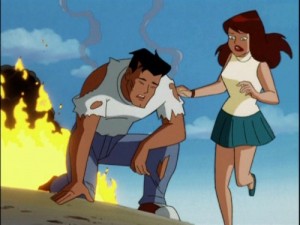 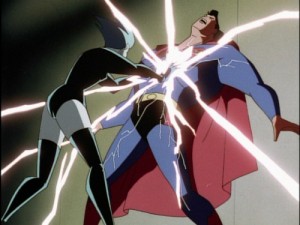 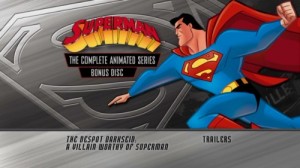 Michael Durr has been reviewing movies for the better part of fifteen years now. He primarily enjoys thrillers, sci-fi, animation and even a little courtroom drama. His favorite films include Escape from New York, the Goonies and anything with Alyssa Milano. When he’s not praising Kurt Russell as the greatest actor of our time or scratching his head over a David Lynch flick, he’s spending time at home in Texas with his lovely wife, Lori and his amazing son. How they put up with him is a mystery, but even Basil Rathbone doesn’t have the time to solve that one.
Don’t You Forget About Me The Open Road (Blu-ray)