Posted in: Disc Reviews by Michael Durr on December 3rd, 2009

Spongebob Squarepants is such the cultural phenomenon that anytime an anniversary or a full length motion picture comes into production, the show can usually get a slew of good actors and sports stars to do a cameo. For Spongebob’s tenth anniversary and third tv movie of the series: he decided to bring out a slew of guest stars. The only question that remained was the hour long episode any good or was it the show’s version of week old bread with those really crusty parts?

Today is the day of the eleventy seventh (that’s 117 for you land dwellers) of the Krusty Krab. It was just yesterday when Spongebob had tasted his first Krabby Patty and knew his life’s goal would be to work at the establishment. Spongebob showers, puts on his clothes including his eager face and goes to the Krusty Krab to clock into work. When he gets there, he realizes that the place is surrounded by customers all eager to get in.

There is one thing left before they open the Krusty Krab that Spongebob must do. He must transport the giant Krabby Patty ice sculpture he made. All of the participants huddle inside the freezer to try and move the sculpture. They fail and in the process, they lock themselves into the freezer. Now, they must find a way out of the freezer using the elaborate air duct system. Can they get out in time to serve the customers and keep Plankton away from stealing the Krabby Patty secret formula?

Before I go on with the analysis, there is one part I deliberately left out. The live-action sequences with Patchy the Pirate (played by Tom Kenny who is also the voice of Spongebob). The basic story is that Patchy the Pirate, president of the Spongebob fan club finds a way into the Nickelodeon Studios and into one of the offices where he goes through the Rolodex and calls random celebrities.

The whole purpose of this is to get those people on his 10th anniversary show. There are plenty of cameos in these live action sequences like Rosario Dawson, Triumph the Insult Comic Dog, LeBron James, Craig Ferguson, Robin Williams, P!nk, Tina Fey & Will Ferrell. There is just one problem with the production and that is it comes off really annoying.

Patchy would be okay if the live action sequences didn’t drag on and on even after the joke is clearly established. Most of the guest stars are in there for a minute and then they completely disappear. I would have loved to see more of Robin Williams and Craig Ferguson for sure. But the whole live action subplot never sticks and instead you are just waiting for the next part of the cartoon to show up.

The cartoon is very funny, it’s rare to find an episode of the show that isn’t. Spongebob is his charming self and Patrick is really the true star of the show more often than not. There were a couple of awesome things in this movie that need pointing out. About halfway into the show, Patchy showed several fake openings and rare clips for the show. The fake openings with Squidward, Mr. Krabs and Patrick were genius. I also enjoyed Spongebob in the pseudo 40’s cartoon style for one of the clips.

The show also comes with four other cartoon episodes. Each of these episodes are eleven to twelve minutes and exclusive from season six. The two best are clearly Krusty Krushers and The Card. Krusty Krushers is about SpongeBob and Patrick becoming tag-team wrestlers because Mr. Krabs wants to win a million dollars. I honestly think it is my favorite Spongebob episode so far. The Card is about trading cards and how Patrick finds a rare trading card that Spongebob has been trying to get in a pack of Mermaidman and Barnacleboy cards. There is much hilarity in this one too.

The video struck me odd at first. On the back of the packaging it does say Full Screen which would imply 1.33:1. Kid friendly and all that. However, this was the first episode of Spongebob ever shot in widescreen and hd. Okay, my eyes must be deceiving me. Because not only is that full screen, it is also letterbox widescreen. The type you see on network television where commercials try to be awesome and crop the picture both left and right but also top and bottom. I don’t even know if that qualifies as 1.33, maybe like 1 to 1. The colors are awesome, but the aspect is utterly ridiculous.

Keeping along with the usual we get a Dolby Digital 2.0 English stereo mix and it’s quite suitable. Spongebob is full of visual and dialog driven jokes and they come through very easily on any stereo system. Simply put, it’s not going to wow you or anything but you won’t strain your ears either. Closed captioning is also included for those who need it.

This dvd should be an easy recommendation. All of the animated cartoons are strong and will provide much laughs for your child. It’s Spongebob, how could anything possible go wrong with the sponge who is larger than life? Patchy the Pirate, that’s what. Patchy single handily comes in and sucks the life out of the picture and the dvd. His weak humor and berating of the guest stars who decided to cameo is unnerving.

When you throw that in with the video aspect ratio sticking with Full screen & letterbox (when the episode was broadcast in HD & Widescreen), it makes this DVD a complete miss. Here is my recommendation. Skip the dvd and instead buy volume 1 of Season six on dvd when it comes out December 8th. That will have Porous Pockets / Choir Boys and eleven other episodes that will be more interesting than what is contained here. (Krusty Krushers & The Card will be on Volume 2). Lots more awesome and a little bit more money. Enjoy that package, not this one. 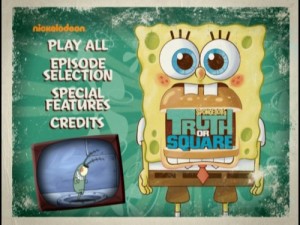 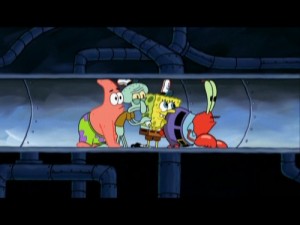 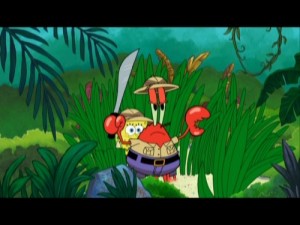 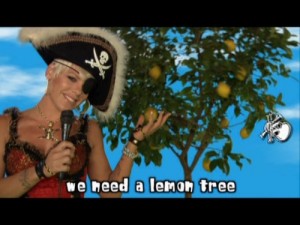 Michael Durr has been reviewing movies for the better part of fifteen years now. He primarily enjoys thrillers, sci-fi, animation and even a little courtroom drama. His favorite films include Escape from New York, the Goonies and anything with Alyssa Milano. When he’s not praising Kurt Russell as the greatest actor of our time or scratching his head over a David Lynch flick, he’s spending time at home in Texas with his lovely wife, Lori and his amazing son. How they put up with him is a mystery, but even Basil Rathbone doesn’t have the time to solve that one.
Hogan’s Heroes: The Komplete Series, Kommandant’s Kollection Holiday Spotlight: Yogi’s First Christmas