Posted in: Disc Reviews by Michael Durr on December 15th, 2009

Janky is a term that means shady or dishonest. An adjective that is anything but tasteful. Throw that in with the noun promoters and what you have is possibly the biggest revelation since somebody discovered Jon & Kate would have marital issues with eight children & a camera crew running around. Oh really? So, when I received Janky Promoters in the mail with Ice Cube and Mike Epps smiling ear to ear, all I could think was “Janky Promoters indeed.”

Russell Redds (played by Ice Cube) is an entertainment promoter. He has a fiancée named Loli (played by Jowharah Jones) who he plans to take to Aruba. He also has a kid named Seymour (played by Little JJ) who has aspirations of being a young rapper. It sounds like the perfect family but yet there are more than a few kinks in this scenario.

Russell is also a broke promoter who has go through his fiancée’s pocket book to make ends meet for the next gig. His partner in crime, Jellyroll (played by Mike Epps) is also penniless and having an affair with a married lady named Regina (played by Tamala Jones). The main problem with this is that Regina is married to Officer Ronnie Stix (played by Glenn Plummer) who wants Jellyroll in pieces.

In the process, Russell & Jellyroll are trying to put together a gig featuring Young Jeezy (played by rapper of same name) to put on a show in Modesto, California. But the duo has a lot of problems involving anything that has to do with money. This includes a limo, a hotel, drugs and anything else that Jeezy wants in addition to securing the place of venue. None of which is going to be easy.

Difficult decisions are made. The limo becomes a large van. The hotel becomes some dive in the projects and the drugs are bought off some pusher named Mondo (played by Darris Love) who is looking to make sure that Jeezy makes the after party. In fact, Mondo decides to give Jellyroll $20,000 in order to make sure that happens. If that doesn’t happen, Jellyroll & Russell (unknowingly) will be pushing up daisies.

Things start to unravel as the hours draw closer to the rap show. The opening act turns out to be Seymour who has now assembled an entourage even though he isn’t that good yet. Young Jeezy has not received his money yet, isn’t happy with his accommodations and gets even more upset when his road manager, Percy (played by Lahmard Tate) is taken to jail. Will Russell & Jellyroll be able to pay off everybody and bring together the concert that could make them famous?

I’ve enjoyed Ice Cube & Mike Epps in plenty of other films. There were of course the two Friday films as well as solo ventures including a couple of Residential Evil movies for Epps & Ghosts of Mars or Longshots for Ice Cube. But something just felt out of sorts here. There was no magic, no really funny moments and a complete lack of a decent supporting cast. Most of the funny lines felt forced and everybody really felt one dimensional.

One dimensional is a term that I use when somebody doesn’t grow through the period of the film. In this case, I couldn’t find anybody who actually grew from the film. Everybody came into the film one way and stayed that way until the credits. The way more often than not was just completely distasteful.

Russell Redds, shady con-man. Jellyroll, shady slow-witted con-man. Young Jeezy, cocky rapper who likes drugs and women. It goes on and on. Heck you can’t even like Officer Ronnie Stix because he is an alcoholic and acts like he is MR or something. Russell’s mother sells crack for pete’s sake. The only two people I marginally liked were Loli & Seymour.

The movie is shown in Anamorphic Widescreen 1.85:1 aspect ratio. The colors are decent and there are no real eye sores in the film. It’s honestly standard fare for a show that is produced in this decade. The scenes are mostly of the urban life in what we assume is Modesto, CA. If this is Modesto, remind me to never visit.

Sound is presented in 5.1 Dolby Digital English. There is a lot of music presented here and the bad part is that the dialog sometimes gets lost in the fray. The interchanges between Epps and Ice Cube perform best here as there aren’t any surround effects to speak of. Subtitles are also provided for English and Spanish.

The team of Ice Cube & Mike Epps is generally a really effective comedy duo. Two Friday movies, All About the Benjamins, and probably poker night at their houses are more fun than is legally possible. But something happened here. The comedy didn’t follow. Instead all we got is a very repressed, dull and forced comedy. The supporting actors and actresses didn’t really help either. The dvd only backed up this claim as it was a barebones with no attempt to deliver exceptional audio or video. Fans of the duo might find this a great time, but I would think they would not find it to be their best work. Recommendation to avoid. 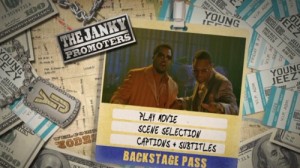 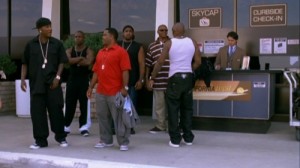 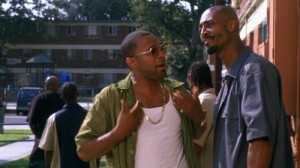 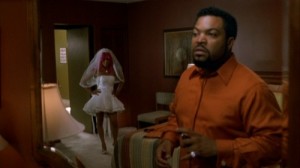 Michael Durr has been reviewing movies for the better part of fifteen years now. He primarily enjoys thrillers, sci-fi, animation and even a little courtroom drama. His favorite films include Escape from New York, the Goonies and anything with Alyssa Milano. When he’s not praising Kurt Russell as the greatest actor of our time or scratching his head over a David Lynch flick, he’s spending time at home in Texas with his lovely wife, Lori and his amazing son. How they put up with him is a mystery, but even Basil Rathbone doesn’t have the time to solve that one.
The Tudors: The Complete Third Season Star Trek: The Original Series – Season 3 (Blu-ray)