Posted in: Disc Reviews by William O'Donnell on January 1st, 2010 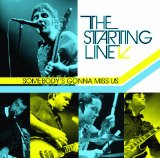 The title, “Somebody`s Gonna Miss Us” is cute but also rings true. This is not a Documentary that details why this band rocked the entire music world, because they did not. This film shows how a Pop Punk outfit from Pennsyvania arrived at the right time with a lot of energy, the willingness to tour endlessly and made some tunes that people genuinely loved.The film bounces back and forth between the boys in the band giving their history in their own words, as well as chunk by chunk (several days at a time) coverage of their final tour. Having this story told entirely by the band is refreshing as it makes for better fanfare. This CD/DVD combo is indeed entirely for the fans, the ones who will “miss them” as it were.

The band goes through an enormous rise as an indie band, then faces trial after trial with major labels who do not fund or support their artists properly (largely their words). It all comes down to the fact that they mattered a lot to the fans that they have and they did a good job reaching as many as possible, even after they decided it was over. Young teenage girls need something to rock out to just like everyone else, even if it is terribly safe and even fluffy at points.

Filmed on Digital Cameras and presented in Fullscreen. As it was clearly made by them (or at least by those close to them) this does not have the biggest production but since a lot of the footage had to be grabbed in moments before and after shows, there was no time for prepping. Nothing too pristine but it’s fine.

Dolby Digital 5.1 Surround, which should be part for the course with anything that has a full length concert on it. The music is the most important part of this CD/DVD so it is nice to hear the bass rumble, the vocals come through clear, and the guitars have some power behind them.

If I am to treat the Documentary as the main “feature” (as it is basically feature length) then the special features would be the live concert and the accompanying CD of  said concert. Often it is the CD that is the main feature and a DVD may be included with a video or something but efforts have clearly been made to make the Documentary more than just an Bonus.

These are clean living, well meaning guys who wanted to make music that they enjoyed and found a good amount of fans who did. This CD/DVD combo makes a perfect addition to a fans collection as it offers what they would to see and hear want without being nothing but redundant rehashes of their “hits.” As well, this could be a perfect first taste of the band for those who may have missed their time in the Alternative music scene.