Posted in: Game Reviews by Michael Durr on March 5th, 2010

Data East was a great video game company that lasted from 1976 to 2003 when it declared bankruptcy. It had an arcade & pinball heyday for most of the eighties with many fantastic titles. Luckily, most of the assets were bought up by a single company called G-Mode when Data East was forced to sell them off. Recently, Majesco worked with G-Mode and re-released fifteen of them in a very nice retro collection for the Nintendo Wii. With fingers crossed, we hope that this collection has aged well.

It’s really hard to sit here and rate graphics on games that range from 15 to nearly 30 years ago. One has to rate it in the context of the era. Most of the games are emulated perfectly. Heavy Barrel looks amazing (the NES really got an inferior version) as does Crude Buster or Caveman Ninja. However, I think we can safely say that Lock n Chase or Burnin Rubber are still pretty ugly. The colors are sharp and they don’t need an HD presentation to stand up on their own two legs. The only complaint would be that the menus were really rather dull.

If I had to pick a weak spot in the collection, it would certainly be the sound and the music. Or the sound of music. I’d actually rather listen to Julie Andrews than the video game sounds of the 80’s and even early 90’s. It’s basically a bunch of bleeps, boops and game over sounds. The menu music isn’t any better because all they use is theme songs from the games. I will admit that they are accurate but it’s enough to turn your speakers on mute if it wasn’t essential to playing. Street Hoop for its original music is a shining example, but then it was the most recent of the fifteen.

There are fifteen games in this collection, each of them have their own individual stories. I’ll try to go over some of the more interesting ones that you would probably pick up the collection for.

Bad Dudes vs Dragon Ninja (1988): A classic beat em up that feels like a mix of Double Dragon and Shinobi. You play two street-smart brawlers named Blade and Striker who are trying to rescue President Ronnie (take one guess who that is based on) from the Dragon Ninja. It’s uses punches, kicks as well as weapons (knives & nun chucks). This was arguably one of the games that put Data East as one of the best arcade developers of the late 80’s and early 90’s.

Burgertime (1982): In the time of Pac-Man and Galaga, there was Burgertime. The idea was simple, run over various parts of a hamburger (lettuce, burger and two sides of a bun) and complete the form down at the bottom of the screen. One problem, you’ll need to steer clear of Mr. Hot Dog, Mr. Pickle and Mr. Egg. I guess they don’t like burgers. Luckily you do have some pepper to pelt at these villains but they are in limited supply.

Caveman Ninja (1991): To a lot of people, they know this game as Joe n Mac for the principle characters. These are cavemen who fight through numerous levels to save a bunch of cavegirls who were kidnapped by some evil cavemen. Fairly simple plot. Each of the cavemen had various weapons like wheels, clubs, bones and boomerangs. Another interesting twist was that the health slowly depleted during the game except during a boss battle. Arguably the most beautiful game in the package.

Heavy Barrel (1987) : One of the most recognizable games by Data East, this run and gun masterpiece relied on a shooting system very similar to Ikari Warriors. A nuclear missile site has been taken over and you must storm into the compound and defeat the enemy leader. Like Ikari, you had dual rotary joysticks to control your gun. This has been emulated very well on the Wii classic controller where you can use the top buttons to fire and grenade while the twin analog sticks to direct the gunfire. There were various weapons, plus crates to open with keys that you gain throughout the game. Open enough crates and you might just The Heavy Barrel.

Wizard Fire (1992) : Most of the games in this collection are fairly recognizable. But there are a few that might have you scratching your head as to why you haven’t seen this one before. One of these games is Wizard Fire. This can be described as an action rpg where you could choose between a knight, bard, elf, dwarf, or a wizard to try to stop the armies of darkness from amassing their forces. It’s actually a sequel to the game Gate of Doom. It reminds me of Knights of the Round or Golden Axe. The graphics are quite decent and the gameplay is excellent.

Briefly, the other games include Burnin’ Rubber, a racing game where you jump a lot. There is Crude Buster which is similar to Bad Dudes but involves the ability to pick up almost any object and use it as a weapon (including a car). The next game is Express Raider where you are cowboy and steal gold from trains (it’s arguably the weakest game of the bunch). Lock n Chase is another one where you are getting coins and money bags and trying to stay away from the policemen. Express Raider and Lock n Chase were channeling some Rockstar badboy personas back in the day.

The last few games featured Magical Drop III, a puzzler where you matched up colored balloons. Peter Pepper’s Ice Cream Factory was the sequel to BurgerTime nobody remembered and there are plenty of good reasons why. Secret Agent was Data East’s answer to James Bond and it played half Rolling Thunder and half Bad Dudes. Side Pocket was considered the best pool game of its era. Street Hoop was an interesting basketball simulation but was around the same time as NBA Jam so it didn’t do so well. The final game of the collection was Super Real Darwin (you might know it by a very similar game called Darwin 4081 which was released on the Sega Mega Drive), and it was basically an ok shooter that flew way too fast for this gamer.

The games all handle reasonably well. There might be some who have difficulty with a few of the games, but playing these with the classic controller (preferred) or Wiimote is going to be a tad different than the joysticks of the arcades. The same could be said of the difficulty. One has to remember that the difficulty of these games were to gear you towards chucking another quarter in. A lot of these games are beatable with unlimited credits, but just think about how easy it is when you envision you only have a fiver in your pocket and you want to play the whole afternoon. A little bit harder now, isn’t it?

On their own, after one were to beat these particular arcade games, they would probably be done with playing it. However, with the achievement or goal oriented consoles these days, they went ahead and created seventy five different goals (five for each game) to complete. Some of the goals are simple, such as beating a stage or setting a high score. There are also creativity in the goals such as Ruin Christmas (fight Evil Santa) from Crude Buster or hitting a shot from behind the half-court line in Street Hoop. Interesting thing about that goal is that you don’t even have to be the one doing it (mine unlocked from the computer sinking the shot).

Some might also qualify as head scratchers, such as Obtaining the Gyasyalba State in Super Real Darwin or Who’s #1 in Secret Agent. It almost seems like they had plans on releasing this to Xbox 360, because the collection is very much geared towards these goals. When you complete these goals, you also unlock artifacts from the various games including music, art and even a special play mode if you complete all five goals for a particular game.

One of the things I like to do as I write a review is read other reviews (if available) on the same product. I’m not going to name my competitors (though the one who reviewed the game as Meh needs a lesson in arcade history) but I feel a lot of people will pass this compilation by because they think that it is just another collection of games. Data East was one of the more influential arcade game developers, especially in the late 80’s and early 90’s. This is a very tidy collection of fifteen games from an assortment of genres and most of them play pretty well.

The graphics are well emulated and even if the sound slips up, these are still very playable. The best thing is that this collection will only cost you $20. Considering how Virtual Console prices things, it could have easily cost you two to three times that if these were released individually. Great value, great collection. I wouldn’t hold my breath for a sequel, but be sure to snap up this one if you can find it. Recommended. 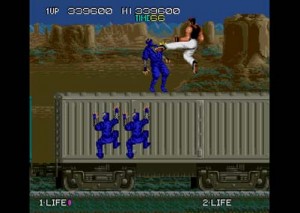 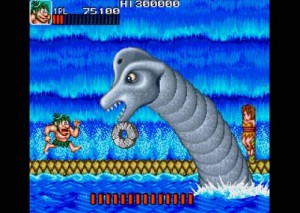 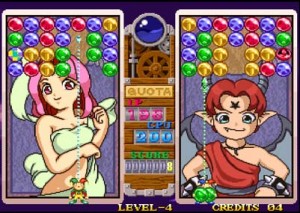 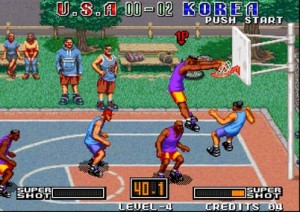 Michael Durr has been reviewing movies for the better part of fifteen years now. He primarily enjoys thrillers, sci-fi, animation and even a little courtroom drama. His favorite films include Escape from New York, the Goonies and anything with Alyssa Milano. When he’s not praising Kurt Russell as the greatest actor of our time or scratching his head over a David Lynch flick, he’s spending time at home in Texas with his lovely wife, Lori and his amazing son. How they put up with him is a mystery, but even Basil Rathbone doesn’t have the time to solve that one.
Mickey Rooney: The Long and the Short of It The Secret Policeman’s Private Party