Alice in Wonderland is one of my favorite books from my youth. One of my favorite birthday presents was a gorgeous copy of the book with illustrations from my aunt. So as a result, I have seen many incantations of the classic title from the famous Disney animated movie to a plethora of tv series & movies. Enter 2010, hoopla over the Alice in Wonderland remake with Johnny Depp, the way was opened for other adaptations attempting to cash in. Alice, a mini-series on SyFy premiered in late 2009 and became the 2nd most watched mini-series in SyFy’s history (first being Tin Man). But how good exactly was it?

Alice Hamilton (played by Caterina Scorsone) is teaching judo to her local students. She takes a strong interest in one of her students, Jack (played by Philip Winchester). As it turns out, these two are very taken with each other and Alice has invited Jack to meet her mom, Carol (played by Teryl Rothery). The dinner goes as planned and afterwards Carol leaves the two alone to finish the night.

After some talking, Jack tries to convince Alice to go away with him. He then reaches into his pocket and pulls out a ring box and slides out a very special ring. She denies the gift and asks Jack to leave, her fear of commitment showing through. Jack leaves rather hurriedly, disappearing into the shadows. After talking about it with her mom, she realizes that Jack slipped the ring box into her outfit. She runs out of the apartment and down the street in search of Jack.

The last image of Jack, Alice sees him stuffed into a vehicle and transported away. Alice is then approached by a man known as the White Rabbit (played by Alan Gray) who tries to coax the ring out of her. In the scuffle, the ring box is picked up by White Rabbit as he runs away. He disappears into a mirror with Alice in hot pursuit. She falls in as well and the next image she sees is the cold damp earth of a wonderland like no other.

After walking around for a while and seeing things she doesn’t understand, she is captured by the White Rabbit and locked up in a crate. Alice is able to pick up the lock but doesn’t realize she is traveling over water. She plunges to the lake below and is forced to swim her way to safety in the nearby city. There she tries to find somebody to help her and comes upon a man known as Ratcatcher (played by Alek Diakun), a dingy and rather unsavory character.

Ratcatcher looks upon Alice as an “oyster” but reluctantly decides to help her after some bartering. He takes her to a place where emotions are liquids in a bottle that are traded as if they were part of a stock exchange. There she meets Hatter (played by Andrew-Lee Potts) who is willing to help her find Jack and get her home. But Hatter is just the first person among a large list of people that she has to figure out if they should be trusted in this odd place called Wonderland.

Wonderland isn’t exactly the place you remember while reading your Lewis Carroll book back when you were a kid. It’s more modernized: there are vehicles, buildings resemble skyscrapers, and science almost seems to have advanced beyond our current means. But in the same breath, it retains a lot of old world charm by including knights, magic, and costumes directly out of a history book. There is even a jabberwocky walking nearby in a forest.

This makes the mini-series more of a sequel (many of the characters make reference to a past Alice) than a re-imagining. The cast is fantastic and so widely distinct. Caterina is a wonderful Alice, she is far away from the passive Alice portrayed in literature as she’s a martial arts expert and takes charge in relationships. However, in the world of Wonderland, she exhibits a little bit of naivety when dealing with the culture and unfamiliarity of the world around her.

Once you move past Alice, you realize that the rest of the cast is exceptionally talented too. Andrew-Lee is possibly the best Hatter I have seen, Mad or otherwise. His quirky but effective way of getting through scenes is fun to watch and seeing how he grows in character from one scene to the next. But perhaps the two best supporting actors are ones I haven’t even mentioned yet.

Kathy Bates plays the devilish Queen of Hearts. She overpowers just about every scene she is in and showcases that she can always be one of the best female villains that graces the set. But the true show stealer is Matt Frewer who plays Charlie the White Knight. Most might see the role as a quirky extra but Matt (you might know him from Max Headroom) is amazing and produces a great amount of laugh out loud moments. If there are awards for supporting actors in a mini-series, he deserves to win it, hands down.

The video is presented in 1.78:1 anamorphic widescreen. The city of Wonderland is a fascinating and full of color. Sometimes it feels like the set was pulled from Austin Powers or perhaps Twin Peaks since it was so quirky. But the overuse of green screen and other camera effects does have a habit of taking away from the authenticity of the various scenes.

The audio is presented in English Dolby Digital 5.1. The audio is surprisingly decent (I never expect mini-series to have credible audio). The dialog is very clear despite the numerous displays of British accents (faked and real). There are a few action sequences that make good use of surround sound and mood music. It does sit in the center speaker but it is not afraid to branch out. English and Spanish subtitles are provided.

As you can probably tell from this review, I gush when it comes to Alice in Wonderland. So I will admit some bias when it comes to Alice, the acting is fantastic and the storytelling feels fresh. This is a great telling of how Wonderland might end up if it were a real universe. The only negatives I could find were pacing issues but mini-series were not meant to be watched in one sitting.

The disc has some surprising audio and well balanaced video. The only extra to the production is a commentary. I would have loved to see some deleted scenes as they indicate in a few places in the commentary that at least half an hour of footage was cut from the movie. Furthermore, I’m willing to bet money that there were some awesome Matt Frewer outtakes that couldn’t be used for whatever reason.

I did want to mention briefly that there is some discrepancy in the packaging on the box. There is a false impression that Tim Curry has a prominent part in the mini-series. His part honestly lasts about 5 minutes and is then forgotten. He is excellent, but it’s hardly an important part. The dvd disc is also housed in an eco-case, it deserves better treatment and a second disc in my opinion. That aside, I give this a strong recommendation and hope this sees a re-release at some point. The world of Wonderland is simply too small for a package like this. 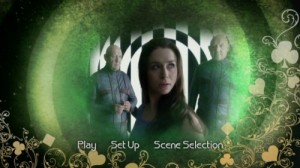 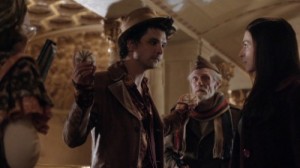 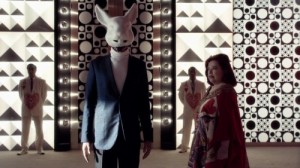 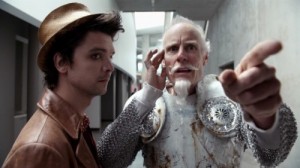 Michael Durr has been reviewing movies for the better part of fifteen years now. He primarily enjoys thrillers, sci-fi, animation and even a little courtroom drama. His favorite films include Escape from New York, the Goonies and anything with Alyssa Milano. When he’s not praising Kurt Russell as the greatest actor of our time or scratching his head over a David Lynch flick, he’s spending time at home in Texas with his lovely wife, Lori and his amazing son. How they put up with him is a mystery, but even Basil Rathbone doesn’t have the time to solve that one.
Cabin Fever 2: Spring Fever UNRATED Possession