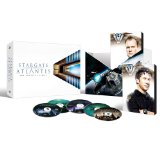 An ancient facility beneath Antarctica becomes the launching platform to the lost city of Atlantis. Atlantis is buried beneath an ocean in another galaxy and can only be reached with an additional symbol on the Stargate. Because of power limitations this trip, at least for the time being, is a one-way adventure. A crew of scientists and military officers from many countries assemble to explore the Pegasus Galaxy from the Atlantis gate. Led by scientist Dr. Weir (Higginson) and Maj. John Sheppard (Flanigan) they take over the Atlantian command center and begin to explore. In their initial investigations they accidentally awaken the area’s top bad guys, The Wraith. These vampire-like beings suck the life-force out of humans.

When Stargate SG-1 was about to enter its ninth year, there was speculation that after season 8 the series would bow out gracefully with the anticipated exit of Richard Dean Anderson. With that plan in mind, the folks at Stargate Command decided it was time to spin off the franchise, and so was born Atlantis. Stargate Atlantis boasts pretty much the same production team as SG-1. The quality of the production and tight storytelling have translated well to this sister series. Stargate Atlantis took a little getting used to. I wasn’t sure the characters had enough chemistry or were even dynamic enough to carry the high expectations for a Stargate series. Those concerns eventually evaporated by the time Atlantis began to live without the SG-1 companion series. These characters really took off, and they’ve developed into nearly as strong a group as SG-1 ever was.

Here’s to Atlantis. Her time was far too short. May she live long in the projected direct to video releases we’ve been promised.

Stargate Atlantis is presented in its original HD wide screen broadcast format. It is obvious that the original print is a digital camera image. Gone is any of the grain or saturation of the SG-1’s filmed texture. This is a clean, if somewhat sterile, image. Colors are incredibly sharp, as is the contrast. Blacks are dead on perfect. The range of color and light is considerably expanded in this format.

The Dolby Digital 5.1 track is as good as it’s been since the first season. The same effort put into making the show look as good as it does obviously translates to the sound presentation. Rich score music works in perfect harmony with the needs of the dialog and ambient sounds. While the rears are not used extensively, they do manage to surprise you now and again with just the right touch to place you square in the action.

All of the features from the original releases of all five seasons remain intact here. These are basically the exact discs from the single season sets down to the artwork on the discs themselves. You can find descriptions of these features in our single season reviews. This includes all of the Audio Commentaries. There are 26 discs in all for the collection with an extra bonus disc that featured material not previously released.

The Bonus Disc is somewhat of a mystery to me. It contains the show’s final two episodes which are already available in the final disc of the 5th season, also provided here. All that remain are two relatively short features.

Mission 100 – Atlantis reaches a milestone: (15:04) In a twist of fate, the 100th episode of Atlantis would also be the last. It is obvious from this feature on the wrap of the series that no one saw it coming, and the plans for the 100th episode were originally to be more of a celebration. This feature brings us footage of the last shooting moments for several cast members and their tearful goodbyes.

Stargate Atlantis – A Retrospective: (27:24 Cast and crew offer their final thoughts on the run and end of the popular series.

But all good things must come to an end, and so it was with Atlantis. SyFy has developed a reputation for showing little respect for its winning franchise players. With the same disregard the network showed such series as Farscape, Atlantis was gone before the cast and crew were finished telling their story. It makes it almost impossible for me to be willing to invest myself in anything the network does. They continue to produce some of the worst science fiction films in movie history. I’m not sure I understand what Bonnie Hammer and her crew are thinking over there, but it is truly a miscarriage of justice. I’m a very diehard science fiction fan who lobbied hard for my local carrier to bring the fledgling network to Tampa when it was an upstart project just down the road in Orlando. But something’s gone terribly wrong there. Between the most obnoxious screen bugs and the failure to nurture quality programs, I’m afraid we’re all going to have to cling to releases like this in order to get our good science fiction fix in the years to come. Here’s to a show that was “truly extraordinary”.

Gino Sassani is a member of the Southeastern Film Critic's Association (SEFCA). He is a film and television critic based in Tampa, Florida. He's also the Senior Editor here at Upcomingdiscs. Gino started reviewing films in the early 1990's as a segment of his local television show Focus. He's an award-winning recording artist for Omega Records. Gino is currently working on his 8th album Merchants & Mercenaries. Gino took over Upcomingdiscs Dec 1, 2008. He works out of a home theater he calls The Reel World. Favorite films: The Godfather, The Godfather Part II, The Body Snatcher (Val Lewton film with Karloff and Lugosi, not the pod people film), Unforgiven, Gladiator, The Lion King, Jaws, Son Of Frankenstein, The Good, The Bad And The Ugly, and Monsters, Inc.
Dare to Play the Game Dread