Posted in: Disc Reviews by William O'Donnell on April 7th, 2010 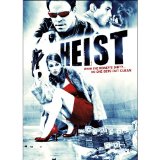 A young criminal (I assume he’s a criminal of some sort) owes a major debt to a Columbian kingpin and he enlists his brother, K, for help. K bumps up a planned armoured car heist by a month in order to help, and the adventure starts there as we see a rag-tag gang pull of said heist and then plan their final moves in a rented warehouse.

The dialogue of this film consists almost entirely of yelling and taunts as each character does his best ‘tough guy’ routine in every…single…scene. Guns and common curse words lose all effect and meaning less than halfway through the film as you simply get sick of their presense in all 92 minutes of this film.

It is not always clear what each member adds to the gang other than being colourful. Each is an ineffective, ungraceful idiot who never once considers that firing guns in a large building in the middle of a city might draw attention to themselves. Thankfully the screenwriters must have considered this fact and saved them by having the cops NEVER arrive on the scene despite them robbing a truck in broad daylight, yelling the entire time, driving away in three brightly coloured vehicles (including one that either has a racing muffler or no muffler at all), firing weapons, more yelling, breaking windows, and never guarding the doors, and admitting that they only had “ten minutes” worth of a distraction before they’d be trailed. Really, it is a clever bit of meta-cinema to have the screenwriters interact with the universe they’ve created this way by having the cops become deaf, dumb and blind for a spell…if only I weren’t being sarcastic. There is no excuse for this elongated flaw called a “plot.”

The editing is terrible on all fronts. All of the sequences are choppy and all visual effects involving guns are exposed as being phony by shots that cut too late so you can clearly see when nothing is being fired from the barrel despite the sound effects or blood spurts. The sound editing is also off a step as some character’s dialogue, especially that of the Columbian drug lord and K’s unsexy and unexplained love interest, does not match their mouths.

You could fast forward through this film and not miss a thing and will never really be entertained (unless its ironic joy you’re getting, such as what one gets from an Ed Wood Z-Movie). One thing you will have after finishing this film is a ton of questions…most of them being “what the hell?” which will occur right up to the stupid-pseudo twist ending (that isn’t really a twist, just stupid).

Widescreen 1.66:1. The picture is not great. The darker the scene, the fuzzier things get. The blacks are not crisp at all. It’s not too faded overall but certainly not clean.

Stereo. Other than the stock sound effects and bad dubbing, the sound is not bad persay. The editing of it is terrible but the quality is decently clean. For an action film, there really should be Surround, that way we can say that it at least has ‘Surround Sound’ as a compliment.

Reservoir Dogs this ain’t. The famous ‘Mexican standoff’ at the climax of Tarantino’s film is a classic gangster moment, and this film attempts to recreate it about every 6 minutes. It becomes a sad state of affairs when you start wishing violence you see in the film upon the main characters. If you choose to watch this, do yourself a service and skip to the 1 hour and 14 minute mark on your player, start watching the gang fall apart from within and suffer some almost Robocop level of horrible deaths. Spoiler warning? No, that was a Spoiler Favour!

Alvin and the Chipmunks: The Squeakquel (Blu-ray) Hurricane Season