Posted in: Disc Reviews by William O'Donnell on April 8th, 2010 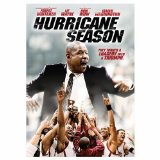 Coach Al Collins sets out to not only assemble a high school basketball team, but to rebuild their gym lost in hurricane Katrina, salvage his home, help each player find hope in their lives as family and property is lost in the storm, and turn them into a championship winning squad. Had this story been fiction, it would seem outrageous, but Hurricane Season is based on an actual man and his real life journey from complete decimation thanks to Katrina, to Coach of champions.

The cast, as a whole, deliver some very strong performances. The intensity of sports, especially between player and coach, can often come off as melodramatic but every shout of wild action is justified and grounded to real emotion. The balance of contained pain and exploding anger is understandable when you see just how much has been taken away from them by the Hurricane and yet they forge on through the high-stress, extremely competitive sports world. Forest Whitaker does a very fine job as Coach Al. He has a naturally wounded mien that enhances the largely no-dialogue scenes surrounding the hurricane aftermath.

The film leans more towards the sports side of the story than the disaster as it is about the people within it, and not the overall event that put them into their situation. Because of this one might be lead to believe that the events have been enhanced for dramatic purposes, which might be true regarding the tensions between the teammates in the locker room but the climactic dunk to win the game at the end is not just a corny “big finish” sports movie moment, news footage follows that scene immediately to show that it is a pass to pass recreation of the true ending to this teams amazing tale. Sometimes real life is more fantastic than fiction, and this story is something to behold.

Widescreen 1.78:1. A very nice picture all around. Even the news footage that is used of Katrina looks clear. All the colours are well balanced and everything looks as it should.

Dolby Digital 5.1 Surround. The disaster portions are booming and rattling while the ambient sounds of the gymnasium are immersive and well balanced in all the speakers. A very nice set of sounds that can be forceful but not distracting.

Subtitles available in English and Spanish

24 Deleted Scenes: All fine scenes that are worth examining as they include whole stories and characters who were cut due to time issues. All of them have to do with the losses people are facing in the wake of the hurricane. All genuinely sad but ultimately unnecessary to tell the story in the film, altough many of them could have easily replaced all of Lil Wayne’s inexplicable cameo scenes as a hustler…of some sort…I suppose star power outweighed human emotion here.

I also would have liked to have seen more on the actual team, be it interviews, news clips or anything to bring the story closer to them. Yes, the film ends with great footage of their final championship game, but more would have been suiting and greatly appreciated.

Because this film sticks to a formula established by so many before, right down to the troubled/doubtful father of one player (think Hoosiers with less time spent on said character), but benefits from having valuable things to say and show about the real-life tragedy of hurricane Katrina. The devastation is not ignored and the struggle becomes all the more real as the performances are up to the task of balancing sports drama and disaster film into the same story.