Iron Man 2 comes out this week and is set to do fantastic business. Usually I’m a person who waits for movies to hit dvd and blu-ray and I’m already planning to when I can go see this movie. But one of the things I’ve come to appreciate over the years is when a big movie such as Iron Man 2 comes out, there are disc releases that dip into yesteryear and help to get you in the mood. Imagine my surprise when I was asked to review Iron Man: The Complete 1994 Animated Series.

To do this correctly, I really have to break up this synopsis into two parts. There is the first season and the second season. Trust me, they are so different from each other, I’m surprised they were released together. Everything from drawing style to the characters to the way they craft stories is different. It’s a fun ride either way but you’ll certainly prefer one over the other.

The first season stars Iron Man (Tony Stark), War Machine (James Rhodes), and the team of Forceworks (Spider Woman, Hawkeye, Scarlet Witch & Century) as superheroes. They take on the Mandarin who has his own band of super villains such as MODOK, Hypnotia, Dreadknight, Grey Gargoyle, Blizzard, and Justin Hammer. They would fight each other every episode and usually everything would be settled in a mere twenty two minutes.

There was no back story and no real direction for this season of Iron Man. We had a solid list of heroes and some interesting villains but nothing really was there to develop characters. Later on in the season, we would see a rather loose and modified interpretation of Iron Man’s origin followed by a wedding between Spider Woman (Julia Carpenter) and Iron Man (Tony Stark) but it was too little too late in most people’s eyes.

This isn’t even taking into account that the first season was corny as all get out. Odd things would pop up like a miniature version of MODOK (which basically he created out of his fat) or Bill Clinton having a heart to heart talk with Iron Man. The most hilarious moment? Mandarin, super villain nearly kills another villain: Blizzard. Why? Because Blizzard accidentally froze Mandarin’s begonias. It gets better by the fourth or fifth episode, but there was nothing to hold the average viewer’s interest.

Then you move into the second season. The opening has changed and the design of the characters are certainly different. Forceworks leave except for James Rhodes and Julia Carpenter. The story is now focused nearly one hundred percent on Tony Stark and his Iron Man alter ego. Rhodes does wear the War Machine armor from time to time but only when his confidence is in check.

Julia Carpenter on the other hand doesn’t really go back to being Spider-Woman, she stays on as Tony Stark’s personal assistant and part-time love interest. She does do some super heroine type feats but it is mostly little nods to what she used to be. Mandarin is also more limited until the final episodes of season 2. He appears in every episode in either conversation or a tiny epilogue at the end but the focused villain changes regularly.

However, the fact that Mandarin does appear in each episode in some form or fashion does play off a bigger theme. The second season of Iron Man 2 has a bridging story that lasts the entire season. It builds and builds until it reaches the final two episodes. It is the mark of a great season. They made a change for the better, but yet it wasn’t enough for it to stick around.

The video is presented in 1.33:1 fullscreen. The show does look good (especially the second season), but there lies a problem. Compression. Each disc contains 8-9 episodes which puts each disc at nearly 3 hours long and it shows to some degree. There is some artifacting and grain present but it isn’t horribly detracting from your ability to enjoy this package throughout.

The audio is presented in English 2.0 Dolby Digital (French and Spanish mixes available). The audio fares much better and the 2.0 Surround track really does its job. This was produced around the same time as the X-Men series and has about the same quality. Explosions feel good, the music is rocking and you might even sing along to the theme music. Subtitles are provided in French and Spanish.

The 1994 Animated Series boxset of Iron Man is a tale of two seasons. On one side, you have the ultra cheesy Iron Man and the team Forceworks against the super-villain team of Mandarin and his begonia beaters. In the second season, we get a little more serious as we see Iron Man become a workaholic and struggle with living up to the image of his dead father. He forgoes friends and lovers to be a superhero. There is also an ongoing arc of stories that reach a climatic final point at the end of the season.

The discs are decent, the video is okay and the sound is pretty good but once again we don’t get any extras. There has to be a pretty lengthy story behind the transformation from season one to season two but we are left to research it ourselves. This series was let go by the end of the second season and replaced by The Avengers: United They Stand (which I hope makes dvd sometime too). It’s a shame because the format of the second season really shined through. Recommended for Iron Man and comic book fans alike.

Episodes
Disc One
And the Sea Shall Give Up Its Dead
Rejoice! I am Ultimo, Thy Deliverer
Data in Chaos Out
Silence My Companion, Death my Destination
The Grim Reaper Wears a Teflon Coat
Enemy Without, Enemy Within
The Origin of the Mandarin
The Defection of Hawkeye 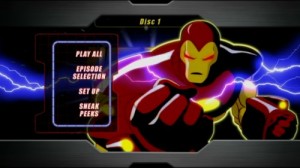 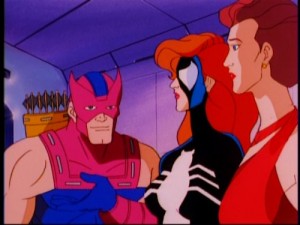 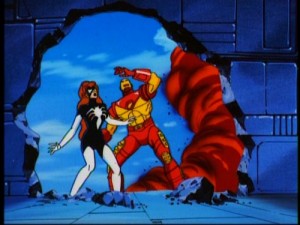 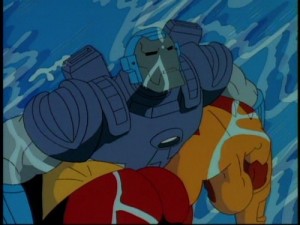 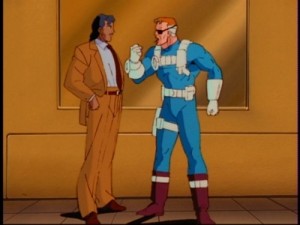 Michael Durr has been reviewing movies for the better part of fifteen years now. He primarily enjoys thrillers, sci-fi, animation and even a little courtroom drama. His favorite films include Escape from New York, the Goonies and anything with Alyssa Milano. When he’s not praising Kurt Russell as the greatest actor of our time or scratching his head over a David Lynch flick, he’s spending time at home in Texas with his lovely wife, Lori and his amazing son. How they put up with him is a mystery, but even Basil Rathbone doesn’t have the time to solve that one.
Upcomingdiscs Is Now On Facebook Survivors: Complete Seasons One & Two