Live At The Troubadour

Posted in: Disc Reviews by Gino Sassani on June 7th, 2010 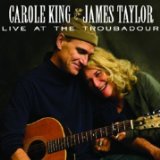 “Oh, I’ve seen fire and I’ve seen rain. I’ve seen sunny days that I thought would never end. I’ve seen lonely times when I could not find a friend. But I always thought that I’d see you again.”

After nearly 40 years since they had worked together, James Taylor and Carole King finally see each other again, at least on stage. The two worked together for about two years from 1970 to 1972. They shared each other’s songs and played off and on sharing the same musicians as friends and backup band. The era was an important time for each of these artists. It was the time when they were working on what would become their breakout albums and stardom down the road. For Carole King it was her Tapestry album, and for James Taylor it was Sweet Baby James. Part of the memories they created together was a series of gigs at L.A.’s famed Troubadour Club in 1971. This release finds the duo once again back at the Troubadour Club, only 40 years later, 40 years older, and 40 years wealthier. It’s a throwback to an earlier time both for these musicians and the fans that drove them to their inevitable stardom.

The selection of tracks for the concert is probably quite predictable. The duo sticks to songs from the period and do not go into the many years of recordings that have populated at least Taylor’s career since those days. They trade off taking the lead, with Taylor providing a little more of the spotlight. Tracks by Taylor include the aforementioned Fire And Rain, Machinegun Kelly, Carolina In My Mind, Country Road, Sweet Baby James, and You Can Close Your Eyes. For Carole King you’ll find such favorites as So Far Away, I Feel The Earth Move, It’s Too Late, and Will You Love Me Tomorrow, a song she co-wrote but which was a larger hit for others. The two often join together in such favorites as Up On The Roof and You’ve Got A Friend.

As much as this concert might be about Carole King and James Taylor, what makes this concert quite magical is the inclusion of the three musicians that not only backed up the two as they started their careers, but a ton of others along the way. All three musicians were powerhouse talents, particularly in the 1970’s. They can be found on literally hundreds of albums. The trio I’m talking about is: Danny Kortchmar (Kootch) on guitar, Leland Sklar on bass, and Russ Kunkel on drums.

Russ Kunkel as a drummer has recorded with just about everybody including: Jimmy Buffett, The Bee Gees, Neil Diamond, Bob Seger, Bob Dylan, The Eagles, Lyle Lovett, and Crosby, Stills, and Nash.

Leland Sklar has appeared on over 2000 albums in his career. Artists he has performed or recorded with include: America, Phil Collins, The Doors, Simon & Garfunkel, The Eagles, Hall & Oates, Rod Stewart, George Strait, Randy Newman, and The Oak Ridge Boys.

Danny Kortchmar has not only appeared on a ton of recordings but has written many songs that have become standards over the years. He has even produced albums for the likes of Billy Joel, The Spin Doctors, Bon Jovi, and, of course, James Taylor.

For the most part James Taylor hasn’t lost a step in 40 years. While he might look dramatically different from the image that fans in the 1970’s knew, the voice hasn’t changed one bit. If anything his tones have smoothed and mellowed. Carole King is a bit of a different story here. While time has certainly been kinder to her physical features than it has with Taylor, her voice is weak. It still sounds nice, but she doesn’t have very much power and has trouble projecting when necessary. There’s still a lot of heart in her performances, and she hasn’t lost a step on the piano, but her pipes aren’t what they once were. I suspect their divergent careers have a lot to do with that. Carole King fell off the planet for a few years while Taylor has been performing steadily all along. It’s a case of use it or lose it, I’m sure. Of course, maybe she smokes three packs of cigarettes a day; I don’t know. Still, the two of them blend together as if the 40 years were merely hours. It’s well worth a trip down memory lane, even if they might be someone else’s memories. You see, I was about nine when these guys got together.

The concert is presented in its original aspect ratio of 1.78:1. The club environment is dark, but fortunately you have some nice contrast that allows you to see the performers set in the spotlights of the stage against the darkened crowd. The picture looks pretty good for a concert location in a very limited environment.

The DTS 5.1 is crystal clear. I’ve both listened to the CD and watched the concert, and the dynamic range on both is quite wonderful. The club is an intimate one, and this gives a lot of atmosphere to the selections. It’s as though we took state-of-the-art digital recording equipment back to 1971 and just let he dang thing roll.

You also get a CD of most of the concert.

The concert has become an entire tour and not the one-off you might expect. The group was recently in Tampa gaining rather nice reviews and notices. With this kind of talent together, there’s no telling what kind of future products might emerge from their time spent together. There’s enough writing and performing talent in that room to launch another dozen decades of fine music and stellar careers. For now, just sit back and enjoy a blast from the past. In today’s rather stressful world, “Hey, ain’t it good to know that you’ve got a friend?”

Gino Sassani is a member of the Southeastern Film Critic's Association (SEFCA). He is a film and television critic based in Tampa, Florida. He's also the Senior Editor here at Upcomingdiscs. Gino started reviewing films in the early 1990's as a segment of his local television show Focus. He's an award-winning recording artist for Omega Records. Gino is currently working on his 8th album Merchants & Mercenaries. Gino took over Upcomingdiscs Dec 1, 2008. He works out of a home theater he calls The Reel World. Favorite films: The Godfather, The Godfather Part II, The Body Snatcher (Val Lewton film with Karloff and Lugosi, not the pod people film), Unforgiven, Gladiator, The Lion King, Jaws, Son Of Frankenstein, The Good, The Bad And The Ugly, and Monsters, Inc.
Ghost Writer: Season One Alice in Wonderland (Blu-ray)