Posted in: Disc Reviews by Michael Durr on July 8th, 2010

Swamp Thing the series was one of those shows that certainly be considered a guilty pleasure. Like the Incredible Hulk, Swamp Thing told the story of a scientist who is forced to live his life transformed as a mutated green monster. However, this particular green monster is not a drifter, he is forced to live his life in the swamp where the elements in turn give him great power. But in return, he must protect the swamp from people who would cause the ecological system harm.

The Swamp Thing (played by Dick Durock) is a large green monster who patrols the swamps of nearby Houma, Louisiana and knows the evil men do. For you see, he was once a man by the name of Alec Holland. Alec was a scientist and professor who was caught in a malicious chemical burning at the hands of Dr. Anton Arcane (played by Mark Lindsay Chapman).

Swamp Thing spends most of his time alone in the swamp trying to foil the evil plots of Dr. Anton Arcane and his assistant Graham (played by Kevin Quigely). These could be ploys against the environment or attacks on the creature himself. He does receive help from the likes of Tressa and Will Kipp (played by Carrell Myers and Scott Garrison respectively) who live nearby and are friends to big, slimly and green.

Volume Three introduces some old faces as well as a few new and fresh stories to keep us involved. The lead-in episode entitled Lesser of Two Evils has the return of Carla Jeffries (played by Tyne Daly) who is Arcane’s rival and has taken over his business. However, she’s even more of a threat to Swampy and he’ll be forced to help Anton put an end to her schemes.

Other episodes include Hide in the Night where Anton Arcane turns himself into a hideous creature that feasts on human flesh. It is up to Graham and Stella (played by Robin O’ Dell) to find him. Another episode involves the return of Carter LaRoche (played by Don Hood). Carter is locked up in an asylum but for some reason he keeps appearing out in public when Dr. Arcane least expects it.

Most of the episodes, especially in the third season establish the relationship between Dr. Arcane and Swamp Thing. At moments, they seem bent on ending each other and others they form loose alliances to go after bigger threats. It can be compared to such cartoons like Wile E Coyote and Road Runner. Coyote is always going after Road Runner but never catches him. And if he did, then perhaps he wouldn’t know what to do next and his life would have no meaning.

Swamp Thing, the series is also very dark in tone. Characters can be killed off at a moment’s notice and we frequently see everything from deadly poltergeists to poisonous plants to visions of future widespread plague. In many episodes, Swampy is near death only to escape from its clutches one more time. It is this tone that would enable to show to be at one time, USA’s top watched show.

But in the same breath, the show was also famous for its very campy flavor. Stating the obvious, you had a big green monster running around who could harness the powers of the swamp and had plants growing out of him. Dick Durock actually worked inside an 80 pound costume on 12 hour days, six days a week. In turn, fight scenes were exercises in landing one large first or a simple throw across the screen. They were not elaborate drawn out affairs. However, in the same breath that is one of the reason I love the show.

For you see, Alec Holland or the Swamp Thing is a classic tragic figure. He can not live a normal life and must live his life sheltered as a green monster in the swamps of Louisiana. He is given great power, but he can not leave the confines of what he now calls his home. Swampy is constantly helping the environment but alas he can only do so much to undo the evil that men do.

The episodes are presented in 1.33:1 Fullscreen. This show was actually shot on the Universal Studios lot in Florida. By the third season, even the swamps were created in studio which actually helped the product. All these years later, I still marvel at the very elaborate costume that Dick Durock had to fit into every episode. It is still impressive after all of these years. The show also deals with a ton of darks and for the most part they worked really well with the presentation.

The audio for this show is a Dolby Digital 2.0 (English) mix. Volume is a little low but considering the age of the broadcast, it is certainly suitable. The dialog is clear, even Swampy and his cryptic sayings can be deciphered with very little issue. The sound effects are actually quite numerous and the music is especially haunting. For a 2.0 television track from nearly 20 years ago, it is one of the best ones you will find. Unfortunately, there are no subtitles I could find.

This would be the final volume of Swamp Thing. Originally, they had planned to reach the hundred episodes milestone but it ended prematurely with the last episode on this Volume. It is a shame because even though many would describe this show as a complete camp fest, it actually had some fascinating stories and meaty characters that were well developed.

Please note that the third volume of this series can only be purchased from the Shout Factory website or online retailers like Amazon. If you are looking for earlier volumes, the first two volumes can be found pretty cheaply if you are willing to look in second hand places such as Half-Price Books and Amazon Marketplace. So, that should help to offset the retail cost of the third volume.

The dvd set is a mixed bag unfortunately. Video and Audio are decent enough but there are no extras to be found, not even previews of upcoming Shout Factory dvd sets. I would have loved to see some commentaries or features involving the surviving members of the cast (Dick Durock died in 2009 due to a long battle with pancreatic cancer, may he rest in peace). It is with such that I still give his set a very good recommendation and to beware the wrath of Swamp Thing. 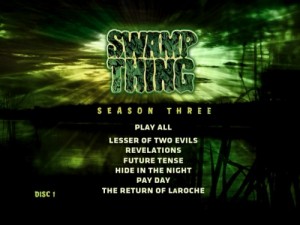 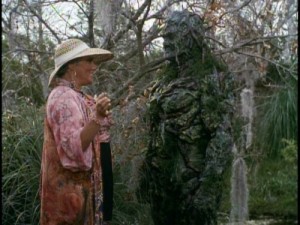 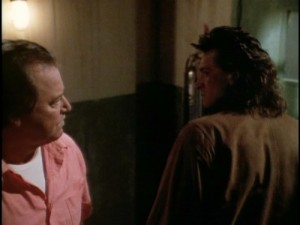 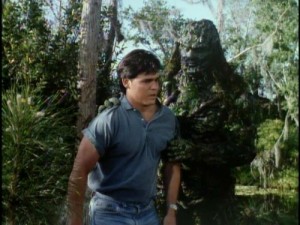 Michael Durr has been reviewing movies for the better part of fifteen years now. He primarily enjoys thrillers, sci-fi, animation and even a little courtroom drama. His favorite films include Escape from New York, the Goonies and anything with Alyssa Milano. When he’s not praising Kurt Russell as the greatest actor of our time or scratching his head over a David Lynch flick, he’s spending time at home in Texas with his lovely wife, Lori and his amazing son. How they put up with him is a mystery, but even Basil Rathbone doesn’t have the time to solve that one.
The Crazies (Blu-ray) Dark Blue: The Complete First Season