Marvel Superhero cartoons come and they go. For every Spider-Man cartoon, there is an X-Men cartoon, or Wolverine or perhaps even Iron Man gets one. Some of them last more than one season but more often than not they are replaced by shows telling the same stories but in a different style. Marvel Superhero Squad show attempts to break the mold by providing fresh stories with a rather interesting and unique animation style.

Super Hero City is a vast metropolis full of super-heroes and civilian life but chaos has taken hold. It seems that Doctor Doom and his Lethal Legion are looking for scattered Infinity fractals which hold great power. With each one collected, they are closing to building an Infinity Sword, a source of ultimate power. However, standing in their way is the Super Hero Squad and consists of six primary members.

At the head of the team is Iron Man who is known for his technology factor. In addition, he has a device that determines that the other five members of the team also have special factors that make them vital to the core group. Hulk has strength, Falcon has speed, Silver Surfer has energy, Thor has elemental, and Wolverine has animal factor (duh!). The team harnesses these gifts and uses them against those who perform evil on Super Hero City.

But with what seems like a fairly straight-forward Marvel cartoon comes with a hitch. This isn’t your ultra-serious bad attitude Wolverine, instead the series has a great amount of humor attached to it. In the best episode out of the set, Enter: Dormammu!, the team seeks out Doctor Strange to help with Sabretooth and Juggernaut. Unfortunately, Doctor Strange is not himself and accidentally releases Dormammu from the Dark Dimension.

Actually Doctor Strange goes positively cuckoo which provides some of the interesting lines of the show. The best line though does not come from Doctor Strange in this episode, but rather Falcon when he comes in contact with Dormammu. “Dude, your head is on fireeeeee!” The line is repeated for comedic effect. It’s moments like this where you can’t help but laugh at the comedic portrayal of our favorite heroes.

The show actually takes a lot of liberty by bringing in almost anybody in the Marvel universe on an episode by episode basis and using them. This can include such favorites as Captain America and the Fantastic Four to lesser known guys such as Luke Cage & Iron Fist or Reptil (who is introduced as a squaddie who is learning the ropes of the “Squad”). This gives the show a lot of freedom to maneuver around and provide fresh stories almost every episode.

True, some might have issue with the fact the Silver Surfer talks like a “surfer” or that Mole Man has a problem with flatulence. The show is clearly aimed at kids but honestly adults can enjoy this too. The important thing is for the fan to not have some sacred holy belief that their Marvel hero can only act all serious like. If they can keep that at bay, they might be laughing more often than not.

The video is in 1.78:1 widescreen presentation. I have mentioned this before but it is nice to find cartoons in widescreen format. Here it certainly benefits the show as often there will be 5 or more heroes in one shot. The only way we could keep up with all of the heroes is to benefit from a larger aspect ratio. The color is bright and vivid and despite the deformed characters, you won’t find too many cartoons that look better than this one.

We get a Dolby Digital 5.1 (optional 2.0 mix) track for the show. Sound is very active here and you would think with the absolute crazy amount of heroes and villains depicted in the show that it would be hard to keep track of them all. That’s actually not the case. Dialog is crystal clear and there are a bevy of sound effects to keep you as interested in the action as the humor. No subtitles could be found.

Even though this volume only includes the first seven episodes, the entire first season has already aired with twenty six episodes. Furthermore, plans are on for a second season. So, it does look like this show will last a while longer and have a wealth of characters to play with. Its balance of humor with good storylines keeps it fresh and should find a home on the Cartoon Network for at least one more full season.

The disc looks really good with excellent video and above average audio to supplement your viewing experience. The extras fall flat but then when you consider the viewing audience, it is to be expected. Interesting note about the series but if you pay attention to the Title card issues they show every episode, they pay homage to a famous issue in comic history. I certainly recommend this show (though I hope they come back with a season set) as long as you don’t have the temperate of Comic Book Guy from Simpsons. Enjoy.

Episodes
And Lo…A Pilot Shall Come!
This Silver, This Surfer!
Hulk Talk Smack!
To Err is Superhuman!
Enter: Dormammul!
A Brat Walks Among Us!
Oh, Brother! 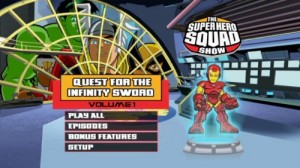 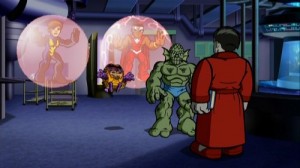 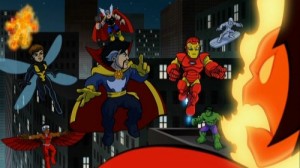 Michael Durr has been reviewing movies for the better part of fifteen years now. He primarily enjoys thrillers, sci-fi, animation and even a little courtroom drama. His favorite films include Escape from New York, the Goonies and anything with Alyssa Milano. When he’s not praising Kurt Russell as the greatest actor of our time or scratching his head over a David Lynch flick, he’s spending time at home in Texas with his lovely wife, Lori and his amazing son. How they put up with him is a mystery, but even Basil Rathbone doesn’t have the time to solve that one.
Gamera Vs. Barugon How the Earth Was Made: Complete Season 2