Posted in: Disc Reviews by Michael Durr on August 18th, 2010

Some of you are aware of this but my favorite movie of all time is Escape from New York. To me, John Carpenter and Kurt Russell represent the perfect director/actor combination. The director knows how to play the actor’s strengths (and minimize weaknesses) and the actor knows how to bring out the best in the direction. It is my sincere pleasure to cover this film on its first trip to the Blu-ray format.

In the year 1988, it was reported that crime had increased by four hundred percent. Things got so bad that they decided to turn Manhattan Island into one giant maximum security prison. Only prisoners live on the island and there are no police. Furthermore, if you are sent to the island, you are there for life. Exit from the island is impossible due to mines on all major bridges and a large 50 foot wall.

It is now the year 1997 and the end of World War III is fast approaching. The president of the United States (played by Donald Pleasance) is attending a summit between the United States, the Soviet Union and China. Trouble hits when the plane is hijacked by a group calling themselves the National Liberation Front of America. They crash the plane into the side of a building in Manhattan. However, the president is able to escape from the plane in a small pod which also lands on the island.

Unfortunately, prisoners on the island quickly find the president and keep him as bait for getting off the island. Word of this gets to the government. The Commissioner of the United States Police Force, Bob Hauk (played by Lee Van Cleef) has an idea to go rescue the president and get back a very valuable briefcase he was carrying. Enter Snake Plissken (played by Kurt Russell).

Snake Plissken is a much decorated war hero who turned to a life of crime. He was arrested following a holdup of the Federal Reserve Depository. A deal is made. If he can go in Manhattan Island and find the president with the briefcase in twenty four hours, he will receive a full pardon. He agrees but with some reluctance. Snake is outfitted for the mission and given some last second vaccinations before flying to the island.

However, these vaccinations are microscopic explosives that will detonate inside his arteries if he is not able to get the president back in twenty-four hours. This will keep Snake from abandoning his mission and fly off to Canada or another remote part of the world. Plissken is obviously furious at this measure and promises to kill Hauk should he ever make it back to civilization.

Snake takes off in the glider made by the government and lands at the remains of the World Trade Center on the island. As soon as he gets off the glider, he realizes he is not alone. There is danger everywhere and as he looks at his countdown watch, he knows that time is not on his side. He takes the service elevator down to the main street and is soon injected into a world he knows nothing of. Snake must use his elite skills and training to find the president and return home safely. Or else, the world might end as we know it.

As most people know, this movie was a stepping stone for Kurt Russell. He played Snake Plissken as if they were the same skin. Many regard the Snake as one of the most iconic and famous characters ever. But what many don’t know is that there were several other famous people in this film that appear only after he steps onto the Manhattan Island. These actors and actresses were products of their generation but deserved to be mentioned in a film of this status.

Cabbie (played by Ernest Borgnine) befriends Snake while on the island. He drives a cab (make sense) and gets Snake from location to location. Then we have Maggie (played by Adrienne Barbeau) and Brain (played by Harry Dean Stanton) who Snake meets that help him get to the President. Finally, we have the Duke of New York (played by Issac Hayes) who serves as the main antagonist for Snake on the island.

All of these secondary actors do a great job for their part and bring a certain cool factor to the characters. That’s another thing about the production, this is a man’s movie. For ninety nine minutes, you are treated to a dose of one-liners and events that will make you stand up and appreciate John Carpenter and Kurt Russell as human beings. The deep story even lends itself to those of the female persuasion to get them to appreciate this action masterpiece. Even the ending will satisfy most of the viewing audience.

The video is in 2.35:1 widescreen presentation in 1080p resolution. One of my major concerns with these classic movies is how well Blu-ray really is going to do with such elements. I’m often skeptical but sometimes I can be pleasantly surprised (2001: Space Odyssey is a good example). Color is excellent here. They really did a good job in cleanup and the scenes look good.

The film was actually done on a six million dollar budget (which was a lot back then) and they used East St. Louis, Illinois for the majority of the shots because they were searching for the worst looking city in the US. As expected, there are a lot of scenes in the dark. For the most part, this works pretty well. There are shots that are simply too dark for any detail, but it is never distracting from the overall intent.

The audio is showcased in DTS HD 5.1 MA English with an optional 2.0 English Mix as well as a 5.1 Dolby Digital French Mix. All I can say is wow. I’ve watched Escape from New York on everything from network television to VHS tape to both dvd sets. It has never sounded this good. Helicopters are the best example of true surround sound as they move from the right to the left speaker.

One can tell exactly where dialog is coming from by following the speakers. Dialog is clear almost all of the time. There are a couple of bad spots, but honestly this is an excellent disc for people who are skeptical on the advantages of blu-ray for older films. Subs are provided for English SDH and Spanish.

As you can tell by my review, I hold this movie very close to my heart. It was one of those movies I would most likely want in my survival backpack should I be shipped off to a remote island. It balances great storytelling with enough action to keep any popcorn movie enthusiast at their seat’s edge. It was also a diving board for Kurt Russell into superstardom. It is history folks and a film that everybody should see at least once.

In the same breath, it is disturbing that the disc package is lackluster. We do get some great video and audio but there are absolutely no extras to speak of. The commentary in the special edition DVD by John Carpenter and Kurt Russell is one of the best commentaries you will ever listen to and the featurettes aren’t bad either.

It is surprising and disappointing that this was missing from the movie’s first entry into blu-ray. I easily recommend the movie (it is one of the best of all time) but would suggest that you find the special edition first. If this film ever gets a double dip in blu-ray, maybe next time they will do it right. 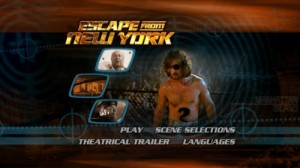 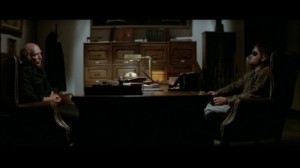 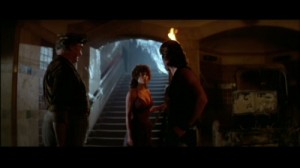 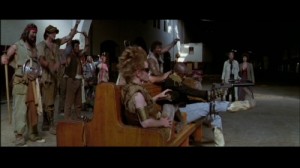 Michael Durr has been reviewing movies for the better part of fifteen years now. He primarily enjoys thrillers, sci-fi, animation and even a little courtroom drama. His favorite films include Escape from New York, the Goonies and anything with Alyssa Milano. When he’s not praising Kurt Russell as the greatest actor of our time or scratching his head over a David Lynch flick, he’s spending time at home in Texas with his lovely wife, Lori and his amazing son. How they put up with him is a mystery, but even Basil Rathbone doesn’t have the time to solve that one.
Podcast: Neil Weiss (director) and Glenn Hopper (writer) of The Hanged Man Cougar Town: The Complete First Season